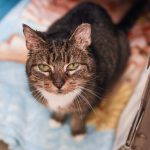 Whereas: January has ended.

Whereas: February is a mini-month, even when it leaps.

Resolved: Winter is on the run.

Not buying it? Well, I’ll wing one more whereas atcha: crocuses start shimmying up as soon as February, and even if ice pelts them, they don’t croak.

Yes, we’re spring-bound now. The cats are already contemplating cabanas in the solaria, claiming dibs on the coolest beach blankets we’ve had donated since last year. They have forgotten about snow and coronavirus and the injustice of Lizzo not winning Best New Artist.

Yet even Januaries are not without their charms and consolations, and it just so happens that they are overwhelmingly feline:

Promoted to the Community Room: Koda

Promoted to the Lobby: Cotton

Promoted to the Lounge: Simon

Winter is still with us, but so are miracles and wonder and heart-shaped marshmallows and magical mutant Persians, which I suppose are the same thing. Here’s to 29 days of leaping life, kittens.