Donate
Beneath the buzz 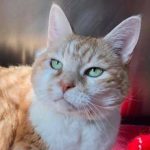 There will always be big names.

There will always be star turns.

But, thank the Lord, there will also always be hidden heroes. 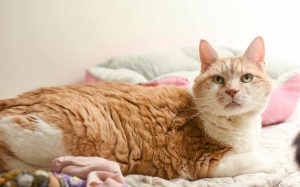 The Millennials, of which I am one of the oldest, are blamed for a lot of things: avocado shortages, the demise of paper napkins, the rise of the Enneagram, laptop stickers, “influencer” as a legitimate career. But no louder criticism is leveled at those born from 1981-1996 than that we believe we are special special snowflakes, precious and unique and each destined to be a staaaaaah (see above: influencer).

Leaving aside the merit of these moanings, I’ll just say there’s one thing that makes me spit my artisanal craft avocado right into my paper towel.* Being told, through word and deed and participation trophy, that you’re called to greatness, has done a number on too many of us. We don’t feel elite and entitled; we feel utterly terrified that we are not going to live up to our glorious golden POTENTIAL. If we are destined to be staaaaahs, what happens if, instead, we’re starfish or star-shaped stickers or even pastina? 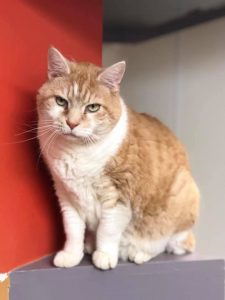 Are we nothing? Have we failed? Will the world ever see our majesty? Do we even want that?

What does it mean to be great?

As usual, our questions would hang unanswered and angst-tacular in the air, if not for the wisdom of cats.

In any collection of cats, there will be white-hot stars. These are the attention grabbers, the scene stealers, the photogenic and the acrobatic and the effortlessly magical. The entire room falls in love with an Anka or a Rose or a Jolene. Everyone wants to understand an Olive. Cats like Scoots and Faye will never need to worry that their stories will go untold.

It would be easy enough, with our feeble human brains, to conclude that these are the cats who are living their destinies. By working so hard to work the room, they make a big splash, a lasting impact, a stamp that can be seen forever on so very many hands. They are seen, and their effects on others can be seen from Ringoes to Romania.

So what about the cats who nearly nobody knows?
What of the ones whose stories won’t even be told on this blog? 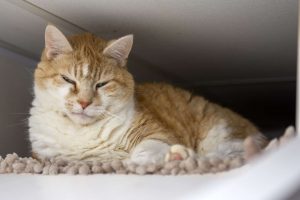 They will touch so few lives, in terms of raw numbers.
They may never be utterly understood for who they are, not by many, maybe not even more than one.
They are hidden.

And they are completely, fully, 100% unconcerned. Behold all the figs they do not give!

The cat who got me thinking of all this frippery was one Bugsy Rosenberg. I’d bet you a basket of figs that you have not had Bugsy on the brain lately. Adopted in 2009, returned with tears when his owner entered assisted living, Bugsy has lived a decade below the radar. Since his return, he has not made any sort of breaking news to attract your attention. Even if you’ve visited, gushing your gush on Rose and Walter and Cheela, you’ve missed Bugsy, shuttered away in our in-house Hospital. 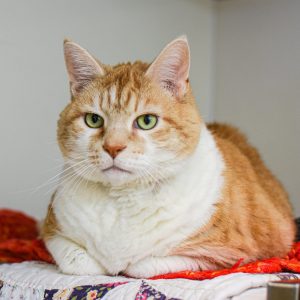 Bugsy’s story has spooled out softly: his battles with urinary blockage, his courage in accepting the special diet we cannot change, his move from Suite C to Hospital, his gentle steps into Miriam‘s shoes.

In his earliest days as Denise’s new office mate, Bugsy kept especially quiet. As Jonathan would ask, “So does Bugsy just live under the cages in Hospital now?”

On my first days in a new place — maybe you, too? — I’d be more inclined to make myself known, establish my identity, show forth something of myself and my truth and…my, my, my, I can be a needy beast. But Bugsy was content to ponder this new season in his heart. It was entirely OK if no one else saw him, knew his history, told his tale. The future would unfold, and he would be faithful to the duties of each day as it came.

The days kept coming, and Bugsy kept settling in at his own pace. Soon, he was wandering the Hospital, delighting in love from all who offered it. That would be a smaller “all” than the average Tabby’s Place cat might encounter; tours rarely lead into Hospital, and even volunteers don’t venture yonder very often. Bugsy would be best known and loved by a small staff. (Small and, as you know, exquisitely strange.)

He was not given a multitude to love or to inspire or to change; he was given a small handful of human beans, and love them he would, well and deeply. His audience would fit inside a sardine can, but sardines are delicious, and anyway, aren’t we all called to give our all to the ones we’re given? 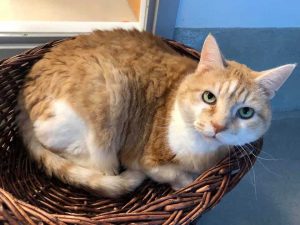 We — the grateful given ones — are doing our best to cherish and understand Bugsy. We can never fully know how he felt in the magical years with his owner; we can never understand how he processes his return to Tabby’s Place; we’ll never thoroughly grok his journeys or his musings or the meanderings of his mind and soul. But that’s OK; that’s between Bugsy and his Maker, and besides, he’s an orange-and-white existentialist anyway.

Hidden from the world, his complex story known to few, Bugsy thrives. He is handsome enough for any cat calendar, lovable and goofy enough for a raft of viral videos. It is no reflection on Bugsy that his audience, his empire, his orbit of influence, is small. It is simply Bugsy’s place and his quiet calling in this season.

He’s faithful to it. He’s content to his core. He knows that it’s enough to love who you’re given, where you are, and trust that that’s enough. So very much enough.

Influence is overrated. And so is avocado toast.

*That way it won’t get on my Enneagram 2w3 laptop sticker.

Guest post: Bugsy’s bliss
A new Norm
Epilogues: July 2019
Epilogues: April 2019
What’s luck got to do with it?

1 thought on “Beneath the buzz”