Some say that the Saturn V Rocket is the loudest sound on earth.

But they’re wrong. Cheela runs rings around such spacey sounds.

It’s not as though he needs to shout. Cheela’s effortless magnificence, his leopardly good looks, his sheer Cheelosity do a masterful job of announcing his presence. 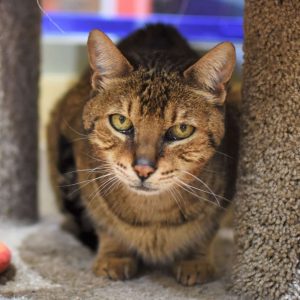 I am here.
I am spectacular.
I am Cheela.

But the loooooong, lean Bengal-blend isn’t leaving anything to chance. In the sad event that his glowing glory doesn’t get your attention, his voice — or whatever that is emerging from him — surely will.

It’s not just that Cheela is loud, although he is. It’s that he’s loud and small — picture the roar of a jet engine emerging from a Skittle — and also extremely…manly.

He may have been neutered circa 1944, but our echoing old man is still all dude. He is James Earl Jones. He is the bass fiddle of the Lobby. He is the one we want to do all our documentary voice overs. (“In a world…where paraplegic cats rule hundreds of humans…”) 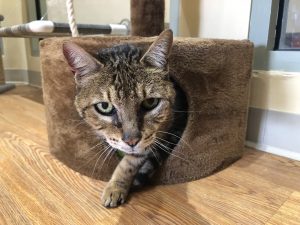 He is the very opposite of cheesy.

But don’t let Cheela’s velvety voice convince you he’s overly serious. Cheela is serious about getting your attention, surely, but once you’re fixed on his fawn-colored fabulousness, he has a newer, truer mission.

He wants to applaud you.

If he were merely moaning for attention, Cheela would clam up as soon as you looked his way. But give him your time, and he’ll only ramp up his roar. Long conversations are yours to enjoy, all the louder as you pet the golden guy with the gravelly voice.

You simply must hear it — and love him — to believe me.

No, really, you must.

1 thought on “Cheeling us on”