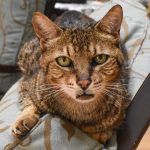 Mu (μ) is the friction constant (it’s a physics thing).

Constant mew can cause immense friction (it’s a cat thing).

There is a reason why kitten cries are so friction persistent! Kittens neeeeeeeed attention.

But, WHY OH WHY OH WHY, don’t all cats grow out of it? Worse, why do some cats grow more into it and get SO MUCH LOUDER AND INSISTENT (dare I say, PURRsistent)?

Asking for a friend.

Seriously, my Higgs has a wail that would have put our deeply-missed Cheela to shame. No, really. I come in the door, he looks at me, he opens his tiny little mouth, and all 8.5 pounds of him just screams, “MEEEEEEEEE-AAAAAAAAAAAAAAAAAAAAAAA!!!!!”

I bet sleepy Stanley would never be so crass as to scream like that. He’d never want to rub anyone the wrong way.

Bianca surely would never. She’ll dance and bop to the beat of her own drum, but she isn’t going to raise the roof with her voice. It’s just not her style (call that an educated guess). 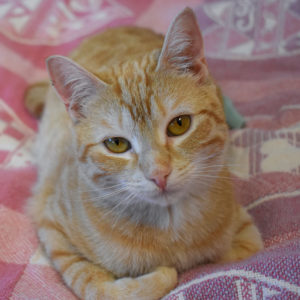 I will say that we have tried oiling Higgs (truth! But, it’s only a little canola oil once in a while to help him with hairballs). This does nothing to stop the, “MEE!MEE!MEE!MEE!MEE!MEE!MEE!MEE!” of his demands to be on a lap, to wake us up, to play with THE TOY. (Higgs, dude, it’s a Cat Dancer – just a wire with some toggles of cardboard at the ends. Chill, fuzzy cat-man.)

It’s a wonder that there aren’t more siren songs screamed about Tabby’s Place. Or, maybe it’s no wonder. It can be dangerous for cats to be too loud. Loud draws unwanted attention. Loud alerts predators and nemeses. Not good. Silence is golden.

On the other side of this whiskery coin are cats like my Ollie. Even his purr isn’t usually audible. Even so, take that boy to the vet and he becomes HOWLER MONKEY! Ollie can be heard at the farthest reaches of the building, at least until he is taken out of his carrier, allowed to explore a little, and given a treat. Back in the carrier, he picks up where he left off without missing one single, em, er, note. 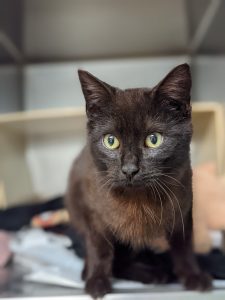 All this fracas can be so EXHAUSTING!

While pining for the relative quiet of the sacred realm, of the suites that breathe with sweet kitty life, I am left struggling to remember: Who else is loud? Who is somber and silent? Am I remembering correctly? Have the dynamics changed because of all of the changes? Just, exactly, what does Otter think if all of this? What will his voice be like as he grows? Or will he be as busy licking as Elijah, so that no one will ever know?

As with physics, there must be answers out there, somewhere.

But, for now, the not knowing is really rubbing me the wrong way.