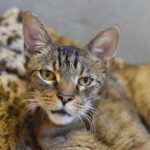 Norman is not normal.

This is a compliment. 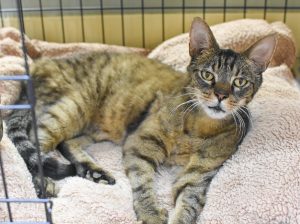 It’s also a complaint, but we’ll get to that in a moment. First and fabulously, it is a compliment of the highest order.

A normal cat would not survive street life at the ripe old age of 177 years. (Official veterinary estimate.) Granted, Norman’s mean streets ran through Flemington, NJ, where the biggest news in any given week is a shortage of guac at Taco Bell. But when you’re 177 years old and hungry, even Flemington is fearsome.

A normal cat would also not emerge from street life — Flemingtonian or otherwise — without the smallest chip on his shoulder. Like most of our old codgers, Norman has volumes of stories under his hat, but he’s only offering us Spark Notes: at some point he was neutered, ergo likely owned; at some point he got outside, ergo either escaped or was abandoned; and over a long stretch of painful points, he became emaciated, ergo it’s been a long time since he cuddled on a cozy couch. 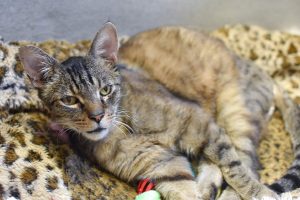 A normal cat — or human, for that matter — would not rise from such a sad story with a grin and a hope and a sense that surely, tomorrow would be better.

Take it from the first folk who met him. Although I’m the blithering idiot that gets to spew forth stories for you, I’m actually late in line to meet most of our cats. Our front line is held by those brave Sanctuary Associates who do “intake,” ushering our newest residents into the Quarantine wing, doing their best to reassure them that they’ve finally found love, while simultaneously doing their best not to be mangled. (Cats don’t always take our word for it that Tabby’s Place is a vast meadow of awesome.)

So our intake-rs meet a lot of cats — literally all the cats — and report back to the rest of us: “Koda is soooooo cute.” “Watch out for Hickory’s temper.”

Or, on one notable August day: “Norman is literally the nicest cat I have ever met.”

This is saying a lot, kittens.

But our grizzled veterans were not exaggerating. Norman’s niceness was worthy of a monument, and all from his very first moments.

This grows even more abnormal when you consider the condition Norman’s condition was in a few hours earlier. Time travel with me.

Animal Control first identified Norman as a likely-deceased tangle of tabby stripes on the side of the road. On closer inspection, he was alive, but laying on his side and twitching, nearly-dead. Fortunately — and you and I know that fortune had nothing to do with it — the Animal Control officer knew what Tabby’s Place does with the nearly-dead.

A few hours later, and intensive care had Norman alive, astir, and humbly accepting the accolades: “Norman is literally the nicest cat I have ever met.”

Emaciated and dehydrated, weak and muscle-wasted, hyperthyroid and hurting all over, the ancient tabby was all joy. In a similar state, you or I wouldn’t have had the energy to smile or talk or even change the channel away from Bachelor In Paradise. But abnormal Norman rose up singing, by which I mean head-bonking and love-bombing us with all the affection in his bony body.

If unbowed bliss was Norman’s only oddity, we’d be waving his freak flag high. But this is where I must lament Norman’s other abnormalities. We’d hoped his frailty was all simple stuff, easy to treat with treats and fish mush and daily medication. But Norman had an abnormality the size of Asia on his hip, and a biopsy determined it to be malignant melanoma.

Given Norman’s hummingbird-like weight, the weird location of his tumor, and his growing list of chronic diseases, only a limited surgery was possible. Big honking heart disease had decided to hitchhike with hyperthyroidism, further shrinking our list of options. The normal paths were not open to the time-worn cat with the ageless enthusiasm.

Making matters more abnormal — although here we’re back in typical-for-Tabby’s-Place territory — things were not so rosy in Norman’s social scene. We’d moved him to the Lobby, that vast land of ceaseless wet food, excessive treats, and continual hugs. If ever a cat needed all of the above, it was Norman. This grateful grandpa of a cat would surely appreciate all the Lobby had to offer.

Alas, a grumpier grandpa would not appreciate Norman. I won’t name names, other than to say that Cheela H. Rosenberg decided to start screeeeEEEAAAMING his strident Bengal blast at Norman all day. Being abnormal Norman, Norman was unfazed. (“Hey, Cheela, you got a real cool voice! Thanks for talkin’ to me! You’re nifty!”) At this point, Cheela resorted to kicking Norman’s bony butt.

And so we had to establish yet another new normal.

As of this writing, Norman’s nestling into life in the Tabby’s Place Hospital. We had some hesitation about housing him with Bugsy, who does best in a humans-only habitat. (And adult humans at that. In the face of toddlers, Bugsy trembles under crates.)

But Norman’s no normal roommate. Sure enough, the cat who could charm the husk off the corn is winning Bugsy’s bashful heart. He’ll just have to add that one to his skyscraper-tall pile.

We don’t know what the medical future holds for Norman. Frankly, it’s not promising. But no diagnoses can dim the sunshine in his eyes. We’re looking forward to making every day abnormally beautiful.