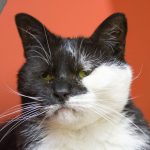 Funny thing about matters of the meant-to-be.

They seem to take an eternity, only to arrive in an instant. 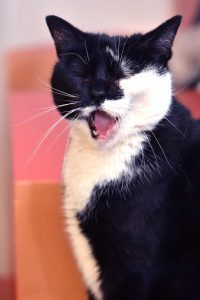 Something languishes and yearns for years. Then, when it happens, it happens in a flash, faster than you can photograph or document or understand. What was years and tears in the making is suddenly in a big hurry. The glacier becomes a bullet train, and it can feel like that long-awaited silver bullet is incoming a bit too quickly.

Not that you’d ever go back to waiting.

A certain sped-up slow-motion-miracle has us feeling a little starstruck, shell-shocked, and generally soupy-headed at Tabby’s Place. After nearly nine years of waiting — more precisely, hiding under crates, behind cats, under aforementioned cats, and anywhere else beyond the reach of petting — Hailey has been adopted.

She was waiting, waiting, waiting, like a non-urgent case in a specialist’s office. (“Dr. Skiddleshorts will see you in fifteen hours.”). She was virtually unadoptable. (That’s my dark recesses’ choice of words, not mine. But don’t say you haven’t thought such things too.) She was going to be here until her last hour. 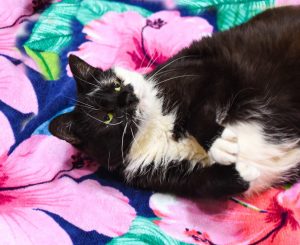 And then she wasn’t.

It was a big bang, a revolution, a cloud of chaos sending Tabby’s Place staff rolling in all directions like loose Cheerios.

It was confusing, honestly. It was frightening. Hailey had become one of the few remaining count-on-able cats, the ones who came to Tabby’s Place back when the Jonas Brothers were little boys, and cauliflower didn’t yet know it could become bread, and Borders was still open, and life made sense.* 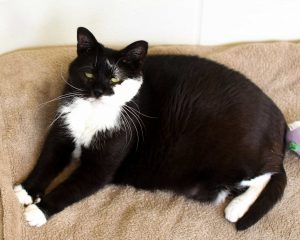 She wasn’t quite an original — you’d have to go back to the Cretaceous period, also known as 2003, for that — but she was closer than most. Her presence, although trembly in our presence, was a constant. For other cats, Hailey was a comfort and a lighthouse and a love. Hailey embraced and adored every whiskered creature indiscriminately, heart open to all who would cuddle.

Except us. Cuddling was not for us.

So we had zero preparation for this day, a day we’d theoretically yearned for but never expected. The exultation was sudden and stark. Why hadn’t Hailey let us in on her long-brewing secret? Where was the breadcrumb trail leading to this revelation of adoptability? 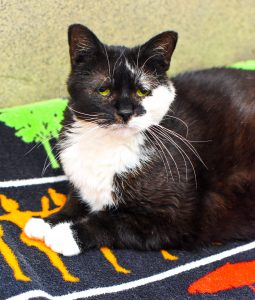 Right under our crummy noses, actually.

There is always another story, a secret under-tale stitching the patches and paths. Even if the revelers and revelators can’t connect the dots, they’re dotty, alright; there is always a road, a pilgrimage, a deep rolling river bringing meant-to-be matters to their distant, dreamed-of shore.

Hailey’s happiness was in the works long before it looked us in the eyes.

The patient ones saw it, those volunteers who quietly, consistently, courageously spent day after tuckus-torturing day sitting on the hard floor of the solarium, cooing and blinking and sometimes even petting Hailey. First they were foisting their love on her, then they were foisting it slightly less painstakingly, and, twelve eons later, she was beginning to begin to enjoy it. There were moments in which she relished it. The word “love bug” was used without irony. Her growth and her gentling did not go unseen.

The cats saw it, the great horde who constellated around Hailey like a stumpy North Star. They were there as years creaked along more awkwardly than Hailey’s bad knees. But creak along they did, and Hailey’s comrades went from protecting her from human touch to sharing it with her. 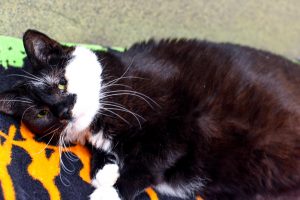 The One who loves Hailey best saw it, shepherding the process, knowing the end from the beginning, grinning with a secret that would emerge in the fullness of time.

And then, fulfillment. Boom. Bang. Revolution of joy.

Hailey’s new humans enter this adventure open-eyed to Hailey’s quirks: inflammatory bowel disease! arthritis! luxating patellae!  a general preference for cats over humans! But because they are AwesomeAdopters, they embraced the whole messy melange.

Because Tabby’s Place is high on the Awesometer too, we’re making this a “forever foster,” meaning we will continue to provide all of Hailey’s medical care right here. 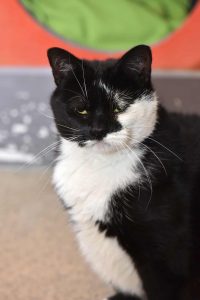 Hailey’s family will cherish her as she is. If she cuddles them, swell; but if she simply befriends their beloved, recently bereaved cat, and lives a life of luxury and comfort casa forever, that will be more than enough.

It’s all as it should be. It’s all we hoped for Hailey. It’s all just a little…fast.

I’d bet my last can of sardines that every revelation and epiphany and happy-beyond-hope happening is like this. There’s always miracle and wonder moving over the waters and under the surface, preparing the way for something that will only seem sudden.

We never see all the footsteps of a pilgrimage. Each of us will walk astonishing roads of our own, coming to places that startle our friends and families and constituencies. None of us can ever fully share or understand all that brings a person or a cat or a mongoose to an inflection point where everything has changed.

In the face of such mystery, silence just might be the most eloquent response.

And silent, Phantom of the Opera-faced Hailey just might be our wisest teacher. The short-legged sausage with the biggest, saddest eyes was never in a hurry. She reached her destination right on time.

And so, kittens, will we.

*HAHAHAHAHA and if you believe life ever made sense, your brain is made of Spaghetti-Os just like mine.

1 thought on “Hailed in season”