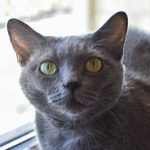 I regret to inform you that Ghost is not impressed.

Oh, you say you’re the President of both Trinidad and Tobago?

Oh, so you’ve won a Grammy, an Emmy, a Tony and an Oscar?

Oh, and also you are verifiably Elvis?

Ghost is not impressed. 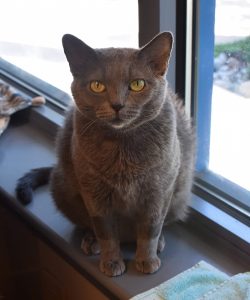 This is in starkest contrast to the humans of Tabby’s Place. We’re always easily impressed (LOOK! A KITTEN! KITTENS IS CUTE! YES I HAVE BEEN DOING THIS OVER TWELVE YEARS!). But when it comes to one Ghost Rosenberg, impressedness is earned.

We’re not primarily impressed by Ghost’s cuteness, although we are that, because it’s record breaking. Enormous eyes and enormous ears fit the tiniest trinket of a face you’ve ever seen. Although some have compared Ghost to Boom, her minky grey coat is paler, softer, pre-filtered with a soft haze more heavenly than anything Instagram can muster (or VSCO, for that matter, but Ghost insisted that I note she thinks the VSCO trend is going to end very quickly; she’s just not impressed).

Which brings me to Ghost’s primary impressiveness.

Although we’re told she lived in a home before, Ghost seems decidedly unsure about our particular world. It’s as though she’s fallen from some great height, or tumbled through a misty veil, and she’s not in Avalon anymore. She’s doing an admirable job of adapting to our lunky, opaque plane of existence (the wet food helps), but she’s not entirely thrilled with it, and she’s not entirely shy about savaging us. 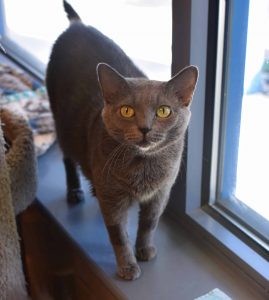 Oh, yes.
There is that detail.

Ghost is less Casper, more Poltergeist. This is her personal Halloween flick, and it’s anyone’s guess which staff member will be the final girl. (Except that I’m out of the running. “Rocking oneself in fetal position while hiding in a hoodie and mumbling Mumford and Sons songs” is not generally a sturdy strategy. But I will have pudding in my doomed lair, if you want to join me.)

In seriousness, Ghost isn’t likely to kill us. She is unpredictable; she is volatile; she is not quite of this earth or ready to submit to its rules (e.g. etiquette, gravity, not texting after 10pm).

She is, however, loved: vehemently and irrevocably loved.

Something about Ghost had an immediate, irreversible effect on all of us at Tabby’s Place. As savage as she was and is, she made our hearts give up the ghost, give up our fears, give up all our Halloween candy (and not just the Dum-Dum pops, I’m talking full-size Snickers and all). One after the next, I heard other staff members express their irrational, enormous, unwavering love for Ghost.

“She nailed me this morning, but I adore that girl.” 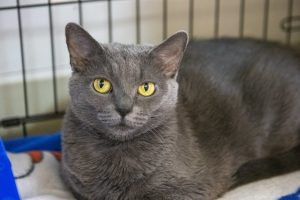 I exaggerate. I jest.