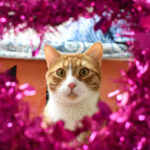 January hath given us Zebra Cake ice cream, and January hath taken away all remaining laughable attempts by our species to appear dignified.

January hath taken away our queen Betty White (and our gentle jester Louie Anderson, and our soaring bard Meat Loaf), and January hath given Betty White the ultimate heavenly birthday gift. (Let all bards and bodacious beasts sing evermore of the Betty White Challenge, in which 285 of you angels donated a total of $10,584 on one glorious day.)

So let’s give some grace to most people’s least favorite month. January has feelings, too. January, known to Emmanuel Macron and his amis as Janvier, would like for us to call it “Javier” and give it greater respect.

Which we will, because of all of Javier’s Janvier cats:

Promoted to the Dubious Domain of the Development Director: Bartholomew

Promoted to Heaven: Queen Bucca the Good and Great

Stuff we learned: You can survive the unimaginable. You can, and you will, like it or not. You will never be the same, but that’s as it should be. And that, for today, is all I’m going to say about that.

January hath given us a thousand opportunities, and January hath borne away our thousand mistakes on its snowy white wings.

May we take all the good, which is ours to keep forever.

May we give back the griefs, our tears in a bottle that January will keep safe on its shelf.

And look! There, in the sky, a great pterodactyl named February is flying in.

Let’s give it our all, kittens.

PS: Let the record clearly show that volunteer photographers Ruth, John, and Rob are three of the coolest, kindest, most gifted and all-around glorious human beans who ever trod the earth. This is a considerable understatement.

Giving bruisedly
Epilogues: October 2022
All fours
At the knee of a wise adoptee: Diane and infinite betterability
Epilogues: September 2022