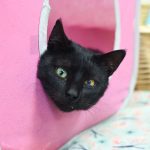 Kitty recently told you about Faith.

I, too, am here to tell you about Faith. 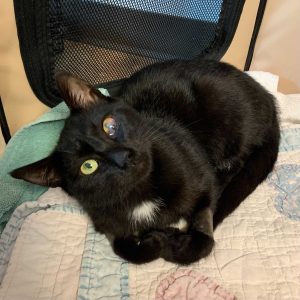 Faith is important enough that three continents of good people came together to carry her home.

Faith is important enough to stop what she’s doing and remind you you’re important beyond all measure.

To the weary eyes of a guarded world, Faith would not appear important. Important People do not have time for sleek black cats who scream and spin ceaselessly, manic fur-seals with neurological impairments and nowhere to go but ’round and ’round.

Important People would not understand taking pains to transport a single Special Needs feline from Lebanon through Turkey to New Jersey.

But Important People hasten past heroes and holy secrets every hour. Important People don’t pause to clap their hands for a world that includes sea lions and the color orange and baguette ends inexplicably nicknamed “The Pope’s Nose.”

Which leaves it to self-unimportant oddballs to make a good faith effort at recalibrating what counts.

Faith, like Hector and Benny and many of our favorite feline people this past year, came to Tabby’s Place from Beirut. Airborne on the mercy of seemingly bitterness-proof human heroes, our Lebanese voyagers were heaven-bent on redefining the Pandemic Year as the Love Explosion Year.

But Faith, unlike the Benniful Bunch (who are working on forgiving me for coining that phrase), traveled solo. As, perhaps, she’d done all her days.

A one-woman soft-serve machine without an off button, Faith baffled her rescuers. She didn’t seem unwell, exactly; there was no reason to believe she was in pain or distress; but she just…wouldn’t…stop…circling.

And singing, if you could call it that. (Which you can, and you should, even if Important People would peer down their peevish noses and mutter, “screaming, if you ask me.”)

And then there was that all-seeing, all-wonkified eye, fixed on you like the love of God itself, but not… exactly… normal.

If ever there was a tri-continental Tabby’s Place cat, it would be Faith. And so, with eyes wide open and love to humble the cherubim, the Lebanese love team launched Faith New Jerseyward.

No faith walk/spin/song is ever simple, and so our shimmering seal spent over twenty-four hours in transit. By the time she touched down, she was frantic to touch the hem of home’s garment, seeking not so much to be healed as to heal. 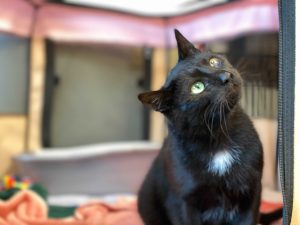 And to spin, like the worried world itself, madly on.

But unlike you and me and all the Important People, Faith was not worried.

Faith was full of the moment, and the moment was Faith’s.

Our first order of business may have been diagnosis, but Faith’s was jubilation. She wouldn’t stop spinning. But if we saw what Faith saw, neither would we.

There was a Community Room and a community of quirkballs to explore (and also cats), a beloved community to build, and a fresh world to discover with every single rotation.

Each time Faith circles, the galaxy itself explodes in newness. It’s as though her wondrous wonky eye sees skies filled with angels and winged sea lions and bacon-laden baguettes with every spin.

Everything is astonishing at all times.

Faith is having the time of her life, and she lives a thousand lives an hour.

Being creatures of rickety faith, prone to forget the green goodness and shining songs on the shores of all our islands, we sometimes slip-slide into worry. Faith herself worries many a visitor. “Is she OK?” “Is she happy?” “Is that any kind of life, spinning around and around and around like that?”

We croak out answers that are true but imperfect: Yes. Deeply. Probably a loftier life than we can imagine. But Faith needs no defense. What she offers, instead, is an invitation. 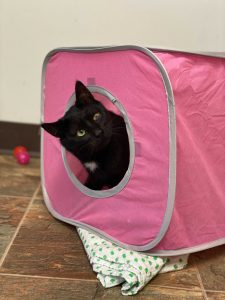 In the face of solemn Importance, she exudes ebullience.

In a staid world gone silent with fear, she just keeps exuberanting.

And when she finally succeeds in dislodging our Importance long enough to laugh, we see ourselves spinning, too.

Ferris wheels and hula hoops and blessed soft-serve machines and the Earth itself are always turning. Who are we to sit out this dance? Who among us doesn’t have our own sacred and profane ways of whirling madly to keep our worlds from spinning off their axes?

Don’t we owe it to ourselves and our Faith and our kindred spirits across continents to make at least a good Faith effort?

The planet is turning, and we can’t stop it. But we can surrender to the dance, shedding our Important skins for seal-slick shimmitude and rebellious joy. We can build the beloved community, starting right in our Community Room. And if we keep Faith long enough, we just might find a still point in a turning world.