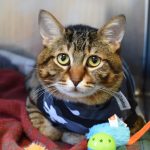 “All people – all lives – are either in crisis, coming out of a crisis, or headed for a crisis.”
– Andy Andrews

“That may well be the case, Andyboy, but it’s actually OK.”
– Hector Rosenberg

I don’t recall where I first came upon that first quote, and I don’t know who, exactly, Andyboy is. (Andyboy, are you reading this?) 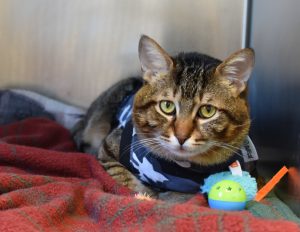 But I immediately wrote it down, because it immediately struck me as immensely true and intensely important. (You know the things you write down as soon as they hit your brain like a wiffleball: “Bucca prefers salmon to tuna.” “Lemon should not be approached from behind.” “Ken Burns should apply his considerable talents to the history of condiments and call it The Mustardmentary.”)

Important, because it reminds us to be gentle with all beings. We don’t know where they are on the crisis conveyor belt.

Important, because it reminds us to be grateful for the lilting seas between crises. Long or short, they let us power up for the next hangnail or volcano. 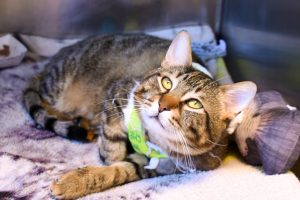 Important, because it reminds us we can, and do, and will overcome. We’ve crisissed before; we will crisis again; still we stand, and sing, and wear our onesies with honor and decorum.

At least, we do so if we’re Hector.

Like the whole lot of Lebanon cats, Hector knows crisis. Hector has beheld the best and worst of Beirut; been hurtled over the Atlantic; touched down in a zero-horse, three-deli, hundred-cat town called Ringoes; and lived to tell the tale with style and a bit of screaming.

The astonishing rescuers of Animals Lebanon selected Hector for Tabby’s Place because they knew he was a “Tabby’s Place cat.” When it comes to crises, we all have our fortes. None of us can heal the world alone, but each of us is called to stitch together the patch we’ve been handed. Tabby’s Place’s “love language” is embracing the cats “no one else wants” — the injured and the irritable, the ancient and the infants, the lovelies who simply ran out of luck, the crisis-clobbered of all kinds and colors. 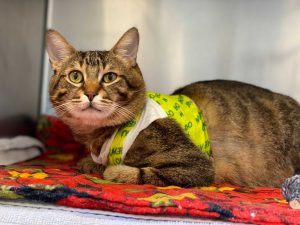 You might say we were born to be the living, hugging balm for the ones hectored by hardships.

And so Hector was selected for the long flight west, crossing time zones with his friend Mousy and seven stalwart companions. He came from crisis; he came amid crisis; he came like a fireball into a fresh new crisis, the Festival Of Oddities that is Tabby’s Place (and I’m just talking about the humans).

The first order of business was attending to Hector’s horrid armpit wound.

(Something important to write down: “Horrid Armpit Wound” would be an excellent name for a band.) 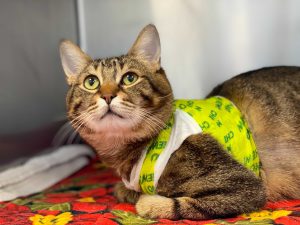 This was no shallow injury from, say, a waxing accident. This was not the result of wearing his suspenders a tad too tight. Hector had been manhandled by a crisis of some kind — we will never know the details — and the results were…well, the kind of stuff that gets you sent straight to Tabby’s Place. Like Baloo and Mystique before him, Hector was in for bandage changes every few days.

Hector was not, how you say, down with this.

We tried to tell him that it wouldn’t be so bad. We offered him a Spotify subscription and whipped up happy, banjo-heavy playlists. (Hector preferred bands with names like Horrid Armpit Wound.) We promised him fish mush and X-Files reruns, but he was smart enough to know he’d get those even if we didn’t do Terrible Painful Bandagey Things to him.

It’s enough to make a cat want to hurl himself head-first into a soothing hummus mud bath.

But when you’re in crisis, you don’t need macerated chickpeas, or even raging music, so much as a friend.

A friend who knows.

A friend who stays.

A friend who doesn’t even need to understand to overpower your pain with presence, and peace, and irrevocable big love.

A Mousy kind of friend.

Mousy, too, had been wounded, in his case on the neck. His heroes in Lebanon told us that Mousy’s injury had improved by about 60%, only to plateau due to lack of equipment and veterinary care. Although he wouldn’t need quite such intensive care as his best Hector, Mousy needed Tabby’s Place. The fellowship of the wounded would grow by one more.

When the angels of Lebanon provided us with a list of the cats they’d be sending across the sea, they made the following notation:

It turns out they understated the case considerably. 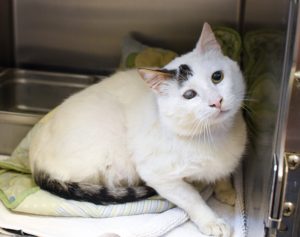 It turns out love is the one thing louder than crisis.

As Hector hunkers down for the long haul, Mousy is his main motivation to heal.

When Hector gets self-conscious about the onesie that keeps his bandage in place (“Does a real man wear a toddlersuit?”), Mousy is his hype man (“YOU ARE A MAGICAL MANLY MIRACLE! I think I saw Jason Momoa wear that onesie on the red carpet!”).

When Hector gets peckish and persnickety, Mousy is his sunny confidante (“They love you, Hec, they’re funny-looking and have unforgivable musical tastes, but they love you!”) 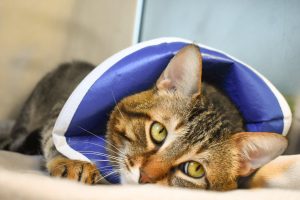 And when crisis comes roaring, love is heckin’ ready.

Let’s remember the important stuff, kittens. Let’s be on the lookout for crisis survivors all around us. Let’s be gentler than seems necessary. Let’s be outrageously good to each other.

Especially the ones in the onesies.

Very important PS: I would be remiss if I did not gush gratitude in the direction of two angelic Sanctuary Associates who shall remain anonymous, except to say that their names are Jae and Carolyn, who welcomed these wondrous boys into their apartment as foster buds. Any subsequent blooming by Hector and Mousy is a result of these early days of love. Jae and Carolyn, YOU are loved and admired.