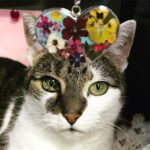 It was the height of foolishness to open my heart to a fifteen-year-old cat.

It was also the closest I’ll ever come to wisdom.

Bucca came to Tabby’s Place in the arms of a good Samaritan. No carrier; no chariot; no warning to our Intake Committee. One moment, we had never beheld the cat with the Van Gogh-painting swirly eye; the next, we were in her crosshairs. 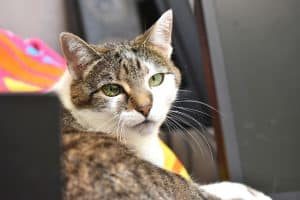 And she was certainly cross.

Who wouldn’t be? As the story goes, Bucca had been one of three cats in a family that moved away. There was room in the moving truck for the dinette set and the sofa, room in the van for two cats.

But, for reasons we do not seek to understand, there was not room for the oldest feline, the hurricane-eyed beauty with a backpack of years. Bucca was placed outside, lost in space until those kind arms carried her to Tabby’s Place.

Older than a high school freshman and completely aware that she had been bamboozled, Bucca was an exploding star of rage upon arrival. We felt for her, felt the pulsing black hole in her heart, felt under-equipped to convince her that everything she’d just learned about humanity was wrong. 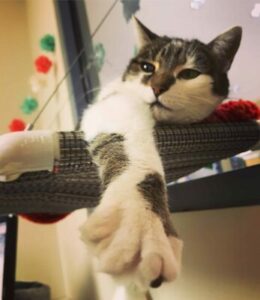 But blessed are the under-equipped, for they shall find assistance from beyond their bumbling hearts. As Tabby’s Place bumblers go, there is none more dunderheaded than the Development Director. Yet, somehow, I was chosen to share my space with Bucca.

The most beautiful cat in the history of time (I will entertain no debate on this topic) made no secret of her displeasure with this arrangement. Taking up residence behind my computer monitor, she proceeded to spit vulgarities at me all day, every day. Growling and spitting became my soundtrack; my asinine oohey-cooey comments and songs and promises of irrevocable devotion became hers.

I still don’t know what switched in Bucca’s brain that fateful day in 2016. But it was as though all the planets in all the solar systems switched places, changed direction, and decided to dance.

One day she was calling me (insert unprintable things here). 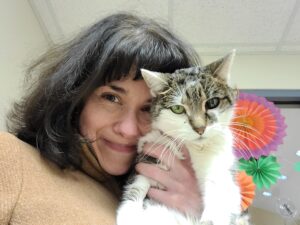 The next, she ran to greet me, with chirps sweeter than “Edelweiss” and a sudden starvation to be held, by me, at all times.

That hunger would hang on for nearly six years.

That hunger would be the nail on which I hung my hat, the sweetness to which I hitched my star, and the constant that kept my constellations from spinning off in all directions.

Through losses and loves, earthquakes and wars and rumors of wars, into pillar-rattling societal chaos and marriage, one global pandemic, one Capital Campaign, and a million million victories and vanquishments known only to Bucca and the moon and the Lord and the Development Director, Bucca’s hunger for my hug fed me the daily bread of best friendship.

She was the giver and the gift, and I was the dunderhead who developed under her stern, sweet sunshine. 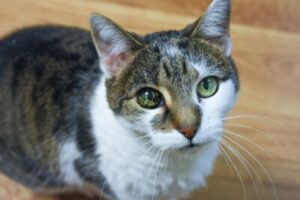 When COVID wrenched us apart, I ached and wept and worried. The latter was pure folly: in my High-Risk-Person-Isolation, Bucca’s swirly eyes quickly adjusted to new light, recognizing a full sky of huggable stars. It was a triumph to see her trust one staff member, then another, then another, hurling herself into hugs from many arms.

She never stopped knowing (all the things).

She never stopped growling when growling was appropriate.

She never stopped giving, and living, and leaping like a toddler despite her absurdly old age. 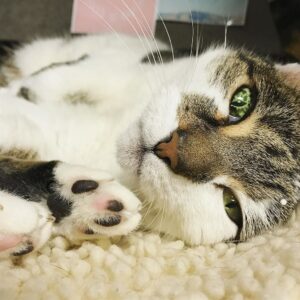 “She’s how old?” visitors would gawp. “Eighteen!” and “Nineteen!”, and then “TWENTY!” I would say, smiling with my teeth, as proud as if I’d somehow packed her full of years and infallible genes and a guarantee of immortality.

She was immortal, right?
Will she forgive me for willfully forgetting the ugliness of “otherwise”?

She was light on her feet and lightning across the sky.

I was foolish and smitten enough to believe she would never make the ultimate leap.

But saints and angels and swirly-eyed best friends know their times. 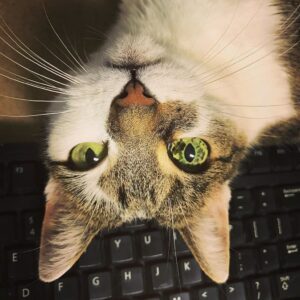 She saw to it that we celebrated our milestone birthdays together.

She saw herself through the door of age 21.

She saw fit to sashay through the veil only when she knew heaven’s New Arrival Room would contain compatriots befitting her dignity: Desmond Tutu, Joan Didion, Sidney Poitier, and Betty White herself.

She sees us even now, and she’ll continue to see us through.

But, oh my stars, I would be lying if I didn’t tell you that all my stars have splintered into dust today.

I can’t remember a world without her. I don’t want to. I don’t want my arms to adjust to the absence of her hug (for make no mistake: it was she who was hugging me, limp rag doll that I was and am and shall ever be, this side of the light).

But I won’t forget the six improbable years that will give meaning to however many more years I’m given. 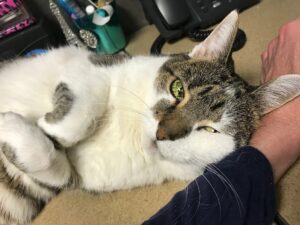 Sometimes I think about Bucca’s old family, and I wonder what they’d say if they knew their fifteen-year-old cat went on to live six more years. Did they think her star was fading? Did they see only craters and miss the moon?

Bucca’s impossible glory was the plot twist that uncurled our fists and our fears.

And today, it’s my task to uncurl from fetal position and let her love reach through my empty, trembling arms.

Or maybe not today.

Today, I’ve just lost my colleague and comfort and co-conspirator.

Today, I’m trusting that my babbling falls on kind ears and soft meadows. 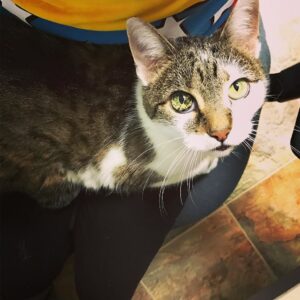 Today, I’m channeling Bucca at her spittiest when I think of a certain old saying: “Smile,” they say, “and the world smiles with you. Cry, and you cry alone.”

To which I say: that’s not the world in which I live and mourn.

That’s not the world that’s held me in mercy through losses larger than I can understand.

No: I say cry, and cry, and cry until there’s nothing left but everything that matters, and there are thousands upon thousands of shoulders that will rise like mighty mountains from the sea of sadness for you to cry upon.

I would stake my entire life upon this certainty. I’m staking my life upon it today. 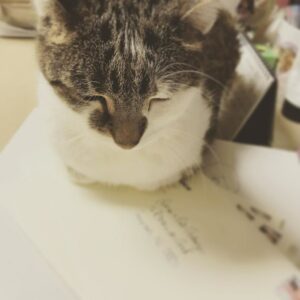 And when tomorrow comes — because, when you’ve been loved, tomorrow always comes — my broken heart will become the moon, facing a swirly-eyed sun that will never burn out.

If I’m wise and foolish enough, and keep my heart open and breakable, my little light will reflect the blazing Bucca that saved me more times than I can tell.

Until then, Bucca my beauty, my beloved, my breath, work the New Arrivals Room. Wield your considerable powers for those of us still bumbling below. And find your hunger finally filled in the arms of the One who loves you even more than I can.

Your little Angela-moon is forever in your orbit.