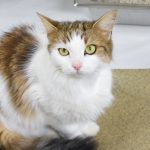 What does your life look like in precisely this frame? 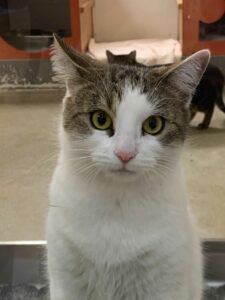 You’re not a frozen confection. If you were, you’d be a strawberry shortcake bar, the invention of which was perhaps the peak of human development. But I digress.

You move. You tango.

And that is your glory. 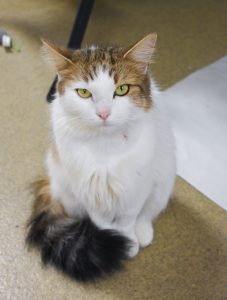 As an inscrutable, incandescent, ineffable living creature, endlessly capable of escaping definition and freezer burn, you are in the same lush league as Bow, Garbo, and Dietrich.

As iconic as their old Hollywood namesakes, our glamour girls arrived wrapped in boas of warm wheat and wizard’s-beard white. You could not find a lovelier cat in any movie, not even a self-important foreign flick that insisted on being called a “film,” or better yet, a “picture.”

But before you picture days of wine and roses, Oscars and ease, press the pause button for a sorrier scene.

Our bevy of beauties lost their beloved person.
The script of safety fluttered from their paws.
The curtain rose and fell and flummoxed them with gasping grief.

That’s around the time Tabby’s Place came into the picture, our lines carefully written by the Author who knows all the endings but never reveals them a moment too soon. Through the tenderhearted interventions of a K9 unit (the irony is not lost on any of us), the baffled starlets blazed a path into our arms. 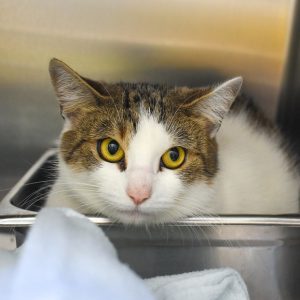 And then the drama really began.

As you can imagine, many new arrivals at Tabby’s Place are confused, angry, and/or maniacally insane. They’ve just become citizens of Ringoes, New Jersey; their last name is now Rosenberg; and they’re surrounded by intensely peculiar persons of at least two species, determined to love them and sing to them and seduce their hearts with enough fish mush for a full multiplex of Clark Gables.

(Actually, I’d prefer just one Jimmy Stewart, but I digress.)

So we’re used to scenes of screaming and hissing and spitting and silent-movie-style melodrama. (When one cannot speak the language, one must exude intensity with eyebrows and teeth.)

If you froze the frame here, you’d quickly typecast all three gals as Difficult Cats. 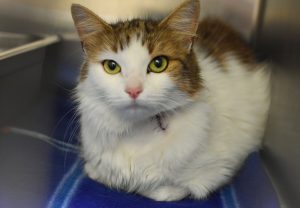 They lunged some more.

They may have evoked the word “jerks” from our preternaturally long-suffering staff.

They hissed and they hurt and they hurled themselves through anguished epics of grief beyond telling.

But stories don’t end with a single frame, and paragraphs are crumbs falling from full novels.

Garbo, Dietrich, and Bow were not born to be YouTube clips.

They were not written as haikus.

The three most challenging, enamoring, exquisite emoters this side of the silver screen had far more story to live. 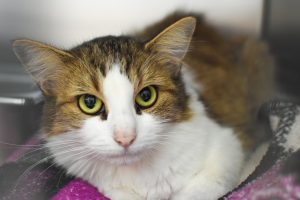 They were, like you and me and all the complex creatures from the dawn of the Film Era to the end of all the eras, complicated.

And such was their glory.

Twenty frames after “fits of wrath” were feats of warmth that could save the planet.

A hundred pages after “forearm-fraying anger” was a chapter so rich in cherishment, it could make that other Garbo not want to be alone after all.

And just a season of scenes after “life is over,” life began again for three bereaved cats, a cast of hearty-if-hapless humans, and, finally, the exquisitely-cast, forever-besotted AwesomeAdopters. Yes: of course, all three of these ladies have been adopted.

Maybe there’s hope for us all.

If three livid, heartbroken cats are more than their darkest moments, maybe we can zoom out on our own stories, too. 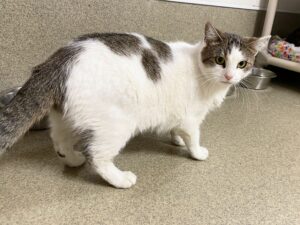 If your tale was reduced a single frame — perhaps lying on the floor in fetal position, eating Kraft Easy Mac with a dirty spork whilst watching Queer Eye reruns and wearing a holey hoodie — we would all be denied the full splendor of your multi-part, rambling epic. (Think the Lord of the Rings books, only a lot longer, with fewer battles, different sorts of wizards, and more strawberry ice cream.)

We — your adoring audience of multiple species — long to love your full, fun, freaky, fabulous story.

If I’m not the hour I cried my eyes out because the hairdresser gave me a Billy Ray Cyrus haircut when I asked for a bob (you don’t know how much I wish I was exaggerating), neither am I the day I was hired as the Tabby’s Place Development Director. 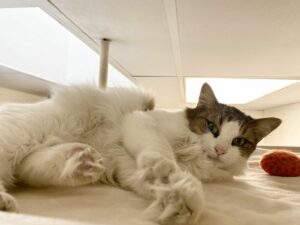 No. We’re not one page — not even the triumphant one. We’re the whole, beautiful, mysterious book. We’re the expanded-edition, director’s cut, extra-commentary-and-Easter-eggy film.

We’re all of our chapters, including the ones yet to come.

I have it on the authority of three glamour cats that those are the best chapters of all.

Keep blurring and whirling and dancing and living, kittens.