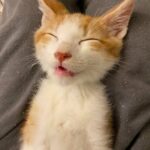 This has not been a normal holiday season.

Fortunately, Tabby’s Place contains precisely zero normal cats, normal humans, or normal salamanders. (I can neither confirm nor deny the underground salamander kingdom of Tabby’s Place, nor their effective rule over the rest of us.)

But even barring debate as to the very existence of normalcy, this December has been one gnarly nougat, non?

Our Chanukah macaroons and Christmas macarons and unrepentant crushes on Emmanuel Macron were all stymied by Omicron.

Supply chains got more tangled than the Best Friends necklaces we shipped to unsuspecting foreign heads of state.

A multinational corporation literally offered us cash if we promised not to make cheesecake. I am not making this up.

But the cake that is life, and the stubborn sweetness that is life with cats, kept on cooking, and so we kept on singing. Here we are in a zinging New Year. Even if we dream of Paris in the springtime, we still have a lot for which to be grateful in the bleak midwinter.

So let’s get to it. We hath hereby been thusly Decembered:

Promoted to the Lobby: Marley, Bjork

Stuff we learned: You can’t keep a bad worm down. Just when we thought ringworm had wriggled its hideous head out of our kingdom forever, sacre bleu! Dies irae! Oh friggin’ no! Along came a sinister “O!” shouting its red, scaly song upon the virtuous head of one Verde. We are not back in outbreak mode, thank all the saints and salamanders, but neither are we entirely at ease.

But then, “entirely at ease” is not the business of mortal beings.

We have not been French toasted beyond recognition, and there’s plenty of cheesecake and courage to go around. January beckons, and we shall answer.