Donate
The edge of Elvira 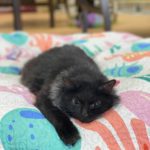 I like people who are rough around the edges.

Unfortunately, I am not one of them. It’s not even entirely clear that I have edges.

I like people who pursue PhDs. Unfortunately, I am not one of them. My research interests converge at the intersection of theology, endocrinology, hobbits, and Sumo. Also strawberry ice cream, but there’s not much funding for that.

I like people (and hobbits) who go on daring adventures. Unfortunately, I am not one of them. I’m in my pajamas by 8pm and get excited to read papal encyclicals (which is a different sort of daring adventure, but that’s another post).

But back to edges.

Edges, like the creatures who are rough around them, get the wrong rap. When we say that someone “has an edge,” we do not normally mean that he cuts through injustice with laser precision. We do not mean that he swashbuckles wickedness with the glistening glory of his moral mettle.

We mean he’s kind of a jerk.

Fair enough: some creatures who “have an edge” use it to cut other creatures down to size. Such edgies misuse their sharpness. But there are others, rough around the edges, shaggy and soft and then suddenly capable of spearing sorrow on a love-kebab, who make me want to be edgy in all the right ways.

There’s a place for edges, and edges can emerge from the unlikeliest places. Consider Elvira.

At first glimpse — and it will be more than a mere glimpse, because no living being is capable of glimpsing Elvira and then summarily moving on to the next thing — Elvira appears to be an edge-free entity. She is softness in superabundance, a shagfest of a Hagrid-haired holy woman, with sage smudges and sparkledust where there should be bones.

But never underestimate a girl who’s rough and shaggy around edges she may not appear to contain. Elvira may look like she just fell off a pegasus from a children’s book enjoyed more at age 49 than 9. But this blessing of a blob of a beast is etched and edged with the essence of life itself.

Elvira arrived at Tabby’s Place beyond blind, her starry eyes bursting with galaxies. When we looked closely, every constellation spelled out, “YOUR RETINAS ARE DETACHED AND THAT’S WHY YOU LOOK SO MAGICAL.” (I would rush to clarify that this is no more than 0.01% of why Elvira looks so magical.) She cannot see; she cannot tell us what she’s survived; she can, however, edge all anxiety out of a human heart.

And when you have endured much, your very spirit is whetted to the kind of edge that could cut all the cruelty out of the world.

Elvira is rough around the edges. Elvira looks edgier than all eight seasons of Game of Thrones, multiplied by Megan Thee Stallion, raised to the power of forty Bruce Springsteens.

But Elvira is here to soften our days.

To cut us loose from our cynicism.

To offer us all an honorary doctorate in esteeming each other highly.

Elvira, for all the cuts life has delivered, is still in the business of marveling at everyone and everything good that she sees (and rest assured: she sees in the ways that matter at all). Elvira enters each hour with edgy, epic trust that goodness and mercy just might follow her all the days of her life. She expects her moments to be heaven-leavened. She dances on the edge of glory just by being.

It takes grit and shag and an edge of grace around a heart that’s known pain (e.g. yours, mine, and every other that has ever been).

Strawberry ice cream might help. But we don’t even need that.

We just need to keep cutting back the brush of hard-heartedness, over and over and over again, until the day when we’re as edgy as a masterpiece and as free as a child.

All photo credits: Tabby’s Place Sanctuary Associate Bree, who is both a spectacular human being of infinite light and (arguably) Elvira’s #1 fan. These qualities are not unrelated.

Gleeful postscript: Between the writing and the posting of this post, Elvira was unshockingly adopted. We are simultaneously rejoicing and feeling terribly sorry for ourselves that we can’t hoard her forever. But such is the sweet sorrow of Tabby’s Place.