Donate
In the final analysis 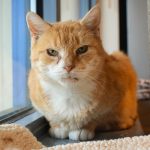 I’ve lived enough lives to know: you do not need to fall prostrate before anyone who begins sentences with, “In the final analysis…”

If it’s final, it’s not much of an analysis. And if it can be analyzed, it’s not a living mystery (e.g. you, me, the cats, the trees, the stars, Paul Rudd). 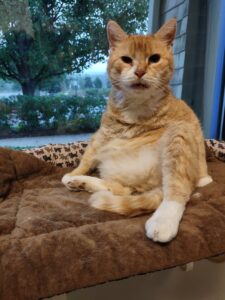 Regarding multiple lives, we all know that cats have nine, and I’m of the opinion that those of us who spend this much time around cats surely get some residual benefit — perhaps three? (I drank ten Diet Cokes a day in college, proving that I’m on at least #2.)

Of course, it takes all kinds of people living all kinds of lives to make a world. There are the aforementioned people who begin sentences with, “In the last analysis…”

There are people who craft spam emails with the salacious subject line, “A safer alternative to cleaning your ears!”

There are people who consciously choose, from hundreds of available options, personal checks featuring the image of Rowlf from the Muppets.

There are people who maintain eternal expectancy

If you ask any self-respecting cat (which is to say, any cat in the history of felis catus), they will readily agree that these last two groups are worthy of great admiration. 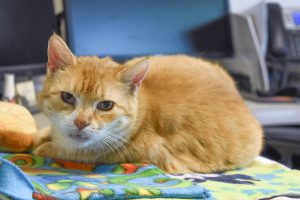 We shall leave aside the earwax annihilators today, but let’s take a closer look at those first folks.

Whatever their qualifications may be (and such persons invariably have many letters after their names and many starched parchments upon their walls), these people are tragically uncatly.

Cats (accurately) recognize themselves as experts and eminents on many topics, yet no whiskered individual dating back to Genesis has any interest in “the final analysis.”

This is not humility. (We are speaking of cats, people.) 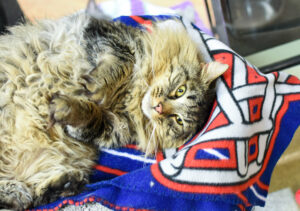 This is the rebellious recognition that a cat with no teeth, no shame, and no prior experience with human persons can turn into the most glamorous, golden object of admiration this side of a triple-cheese calzone. “In the final analysis,” Toulouse had trudged to the end of the line on a lonely farm, but “final” flung off its mossy cape the day she came to Tabby’s Place. Elderly capers continue to ensue. Who’s to tell, much less analyze, what comes next?

This is the unrepentant expectation that good things can happen to “bad cats,” cats with histories and mysteries and dental records conclusively matching the bite marks on their neighbors. With more hair than a minivan of Muppets and more bravado than half the Senate, Oscar was adopted and returned and relegated to Resident Nut Job Of Suite B. 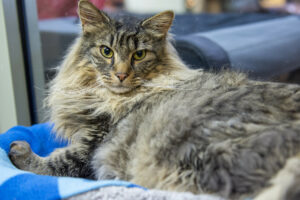 Oscar won many Oscars for the Lead Role Of Walloping Inoffensive Innocents. He chomped Carrot like a root vegetable. He outran Elijah to simultaneously attack him from all sides. Having never met Steven, he assaulted the very idea of him in his sleep. “In the final analysis,” a cat so bent on ending his own species is unadoptable, unacceptable, unworthy of anything but a padded cell and a cold dish of moldy mustard. But “final” is a farce in a realm so rocked by love as Tabby’s Place. Oscar is so unconditionally accepted, love is braiding his many mad hairs into a tapestry that none of us can yet predict.

This is the invincible hope that outlives optimism, even for a neutron star covered in chaos. “In the final analysis,” a blind cat who has already been adopted and returned is, of course, “unadoptable,” a Tabby’s Place “lifer,” doomed to be admired but never fully embraced. But finality is a casualty of the cosmic kindness that sees Elvira as the ultimate eminent. At the right hour, the right family saw her glory: a treasure that transcends sight, a dust bunny stitched together of galaxies, her black-hole eyes gazing an eternal aurora borealis…and inviting us to glimpse it, too. 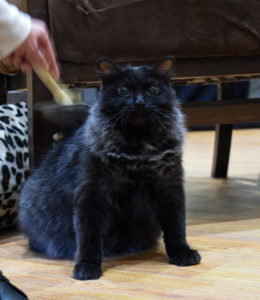 “In the final analysis,” a high percentage of Tabby’s Place cats are “unadoptable.” We do, after all, take the ones “no one wants,” the tremblers and fireballs and everlasting oddballs of ooky origin. “Hopeless situations” are not what erudite analysts would call the birthplace of the worthwhile. 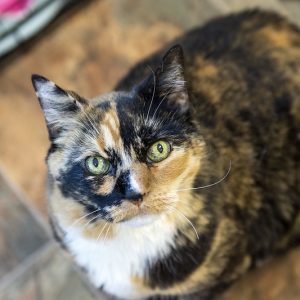 And, fortunately for the cats and for us, Tabby’s Place hearts are the emotional equivalent of 24-hour Wawas. (And nearly as awesome.)

This leaves us in the stalwart safe-keeping of the saints and the angels, the Rowlf check-choosers and the children, the compassionate and the cats.

The final analysis will fall flat on its face trying to grab your ankles as you dance away, even if you’re too old to become an elite gymnast, or too gelatinous to fit into your wedding gown, or too tired to write The Great American Novel this particular weekend.

The final analysis must succumb to its own paralysis, slinking away like a mutant amphibian Mean Girl, when it sees that you — feline or otherwise — are determined to dazzle forward.

Who knows where your road goes? 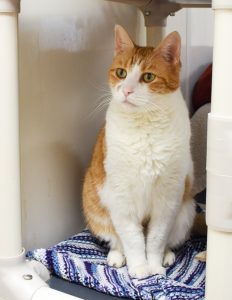 Next month, Honey may get adopted.

Next year, Rolling Stone may declare you “The Geriatric Beyonce.”

Next decade, Astell* may beat the pitiful record for World’s Oldest Cat (thirty-eight), whilst also solving climate change and convincing Phil Collins to come out of retirement. (She does, in fact, seem to have invisible touch.)

So long as the song’s still being sung, there’s room for a reprise, a funky bridge, or a coda that calls everything into question. Or, more accurately, the answer.

So long as there’s life, there’s hope, and we shall not even speak of the life beyond life and the hopes beyond our sights.

In the words of Hans Urs von Balthasar (one of many erudite eminents who was simultaneously an open-heart), “Love alone is credible; nothing else can be believed, and nothing else ought to be believed.”

Finals have not been scheduled at Tabby’s Place.

The pen is in a far kinder hand than ours.

That’s a hardy joy we’d best never clean out of our ears.

* Astell and Faith? Both adopted since I wrote this. You, astonished? Didn’t think so.

1 thought on “In the final analysis”