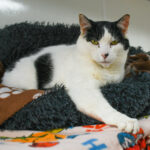 In the chill of winter, it is especially lovely to adorn one’s mantle – or table or hair – with fresh flowers (HUZZAH for hydroponic green houses!). But, with cats around the house, it can be tricky business to beautify with bouquets.

Cats are the key reason that fresh flowers are rarely found at Tabby’s Place.

Cats adore flowers! Perhaps cats love flowers a little too much. They are only too happy to knock vases off of counters, desks, and other flat surfaces. They are thrilled to chew on leaves and drink water that is not intended for quenching feline thirst. The dangers of unwanted exposures to poisonous plants notwithstanding, there is good reason to opt for flowery tops and language instead: eventually, cut flowers wilt. 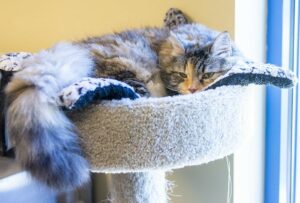 Have you ever seen a cat wilt?

Okay, maybe (read: most definitely) there is a bit of attention-seeking melodrama worthy of all of the awards, along with an excellent cat name. Who wouldn’t love to have an Egot of their very own?

Rashida, for one, outdoes all of the classic Hollywood starlets when she is positively dripping over the edge of her chosen bed. She uses all of her wiles to convince her audience that she will wilt, evaporate into nothingness, should she not be provided with the most perfect selections of tasty treats. Eat your heart out, glamour queens! 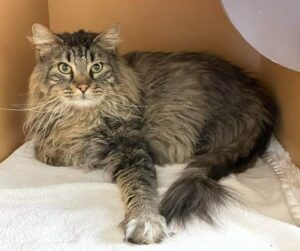 Feline fatale, Rashida might be. But, it is the aptly-named Oscar who most frequently flaunts his furry fashion in defiance of flowers. Leonid locks in summer give way to a fabulous winter coat that not even the best faux fur fabricators could ever hope to imitate. As to wilting, that’s just not a thing that Oscar does (and Oscar does many things). 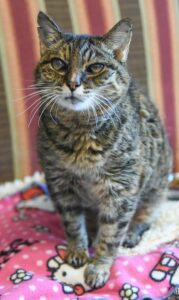 Some might think that wilting is a thing that all aged cats will do in time. Some might think these elders will start to lose their luster, drooping under the weight of their advanced years. They’d be quite mistaken. Wilting is simply not included in the Tabby’s Place lexicon. It can’t be found in the sanctuary’s thesaurus, dictionary, or guide to greater grammar.

In fact, it is well-known at the sanctum sanctorum that Clementine, Samantha, and Honey are all personally affronted by the mere notion of any cats wilting at any age ever. No shrinking violets they. Had any of these fabulous felines a lesser, bipedal stance, each magnificent matron would strut, straight-backed and head high. 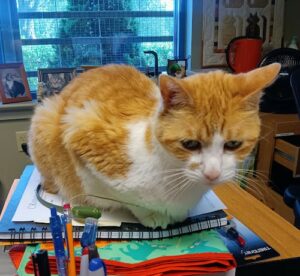 So, when time eventually does catch up with them, as it shall for us all, they will meet it with the fullest grandeur of a bountiful, springtime bouquet. The wilting will be left for the tulips…or not. A shot of vodka* (for the tulips!) will help the flowers stand upright again, renewing their bloom for just a little while longer. Cats, however, have no such use for vodka. Fur just doesn’t fade.

*Tulips only! Don’t try this with other flowers. They’ll utterly collapse onto their fainting couches, beyond any hope of resuscitation.