Donate
It has begun 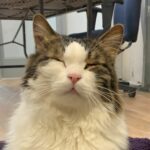 But really, it began before any of us began to begin.

I am speaking of the long-tailed migration into Quinn’s Corner, Tabby’s Place’s long-awaited expansion for cats with feline leukemia virus (FeLV).

Although the full occupation of our new territory awaits, delayed by such spine-tingling matters as permits and inspections, the first paratroopers have begun landing.

You might say that Normandy Beach was our laundry room. Our grizzled old Sanctuary Operations Center was certainly the site of many battles, as laundry lieutenants fought impossible odds against The Soiled Towels Of One Hundred Cats (soon to be a sweeping epic film saga near you).

Our tanks (that is, industrial-sized washer/dryer) groaned beneath their burdens, but the cats (who have established a secret society known as The Impossible Odds) just kept…well, catting all the linens.

Our volunteers relived the Battle of the Bulging Blankets hourly.

So you will understand why we literally broke out the champagne goblets the day we could move into the Quinn’s Corner laundry room. With four times the capacity for laundry, and twice the capacity for bowls and litter boxes (battles too gory to recount), the new facility feels nearly as dreamlike as peace on earth.

But dishes and laundry, of course, are in service to cats.

And some of our most decorated service-members are at the vanguard of our big move.

As we await the right time to begin welcoming FeLV+ cats to the main suites, our staff and their supervisors have begun to occupy the office areas. Admiral Anka led the charge, accompanying Karina and Jae to the Volunteer Office. The main Lobby may look a little lonely without his bachelor pad, but our lush egomaniac is exhilarated in his new home. (Meanwhile, Olive, Valerie, Hips and company are still not sure if it’s safe to explore Anka’s former encampment. Answer: probably not, since he’s watching them on spy camera.)

Down the hall, Reese and Allie inspect the solarium of Danielle’s Operations Office, while enjoying a rare distinction: the only litter box at Tabby’s Place with its own miniature window to the outdoors.

Summer has come early for Merriweather, who is making millions and millions of muffins in one of our shared office-spaces. (Her old roommates in Suite B hope she will send some back. Answer: not happening, since they failed, when given the chance, to properly reassure her that she is a beautiful elegant empress who slays every day.)

But arguably the best and brightest of the Quinn’s Corner generals is one golden, grinning goofus with eyes the color of money, and a goal of making this the Development Department’s grandest year ever.

That’s right: Gator, the flamboyant boy who firebombed FIP (a condition cats “don’t survive”), has accepted the job offer of Chief of Fundraising. This makes me his serf, and he’s gracious enough to share the turf so long as I consult him on matters of strategy and permit him to knock the tiny Jean-Luc Picard figurine off my desk no fewer than forty times a day. (“‘Make it so?’ Make him GO.”)

It’s all so “right,” it’s no wonder the cats are acting like they’ve reigned these rooms all their lives.

It’s all quite thrilling.

It’s all a little surreal.

It’s all kick-starting our New Year’s resolutions, whether or not we had them, since it now takes plural minutes to walk from one end of the building to the other.

(If you’re curious, the mother ship is technically the southern end of Tabby’s Place. I have taken to obnoxiously and often calling the expansion “The North Country,” e.g. “I’m heading back to The North Country, but I’ll see you at lunch,” which no one finds remotely amusing except Gator and me. OK, not even Gator.)

It’s the first landing of the first troops who will ultimately liberate numberless FeLV+ cats from hopeless situations.

There are a few battles yet before we can think about those new faces, much less a Grand Opening. (Be assured that you will be the first to know. Gator gazes at fancy invitations online every day, and he’s already created a gift registry, although it’s suspiciously heavy on Reddi-Wip and squeeze-tuna and titled GATOR’S GEAR.)

But thanks to you, most generous comets, we’ve won the war.

The future is as bright as a certain Development General’s sunny orange coat. 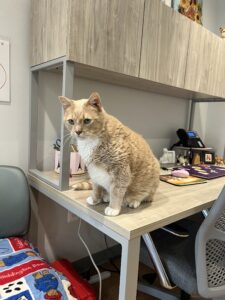 PS: Wondering about our former office mates? Rest assured that Glenn is not sadly singing “Girl from the North Country” whilst pining for me. He, Polly, Habanero, Marcia, Bacon, Toulouse, Agnes, and all the residents of the “old” management offices are feeling fine in their familiar digs, and we all frolic back and forth to see them.

1 thought on “It has begun”