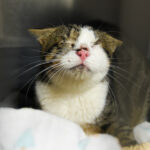 I love Polly, and I don’t care who knows.

Wait, that’s not quite right. I love Polly, and I want everyone to know, so that you’ll all love her, too. 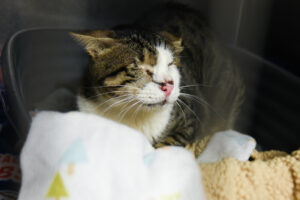 Polly crossed 3,000 miles of saltwater to Tabby’s Place, and she has paid her fare in tears. While companions Hips and Kiko sang traveling songs over every kilometer (“ninety-nine bottles of squeeze-cheese on the wall, ninety-nine bottles of cheeeeeeeeese…”), Polly preferred the sounds of the sea. The lonely Atlantic was her soundtrack as she felt herself suspended between the ocean and the moon, between a Beirut that couldn’t keep her and a New Jersey that couldn’t comfort her.

It’s hard to be comforted when you don’t feel known, and it’s impossible to feel seen when you can’t see over the waves.

We don’t know if Polly has ever seen, by the usual definition. The records tell us that the little Lebanese stray was found blind as a kitten, requiring surgery to remove her eyes. Were there weeks, months, of color and light before everything went dark? Were the smooth slits on her face once wide open, windows to the sky? Did Polly see mama and siblings, sun and moon and winking stars? 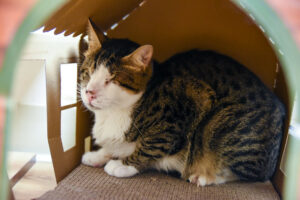 Or has the tiny girl always been a creature of sound and touch?

Those same Beirut records tell us that Polly was “sweet but shy,” saddled with stomach issues that surged like angry tides. That was the ticket to Tabby’s Place, the “Special Need,” the “hopeless situation,” the passport of pain that we could fix.

That was the easy stuff.

Polly would not let us off easy. There were no tra-la triumphs here, no paper-thin reassurances, no misunderstanding Polly to be a Pollyanna, or a girl we could pop into our pocket.

No living creature wants to be sanded down to a caricature, reduced to a report. But Polly, listening closer than most, demanded to be heard. She was not just “sweet.” She was not just “blind.” She was not just a knot of needs in thatched tabby fur. She was a cat in full, weighty with mystery, six pounds of dignity. We could not own or overrule her; she belonged to herself. 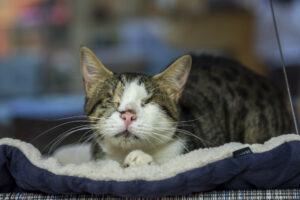 She was not so sure she belonged at Tabby’s Place.

In Quarantine, she raged, cage-livid and loud. She was not here to make it comfortable for anyone else, not about to plunge her pain under the over-easy ocean. Honesty was her birthright. Her history was hers to tell, in all its truths and tatters. She would give full vent to her complaint, bringing up all the sea monsters and tiger sharks and iridescent squid until we listened, really listened, listened enough to see. 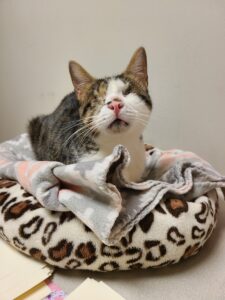 And we, poor blind bipeds, were doing our best to see what she needed from us. Cuddles? “No.” Singing? “<Expletive> no!” Vats of gelatinous bologna? “Perhaps, but no woman worth her shimmer can be satisfied with such sustenance.”

What would sustain Polly would be for us to suspend all expectations.

And, finally, in the hardest surrender of all, all ruminations on what might be.

Maybe she would settle back into the sweetness of her youth, a return to the golden ringlets of her Beirut report. Maybe she had left the neons in Lebanon, and Jersey life would plod through pastels. Maybe she would stop spitting at us someday; maybe she would spit boldly for the duration.

We could only present ourselves to her.

And we could only gift her the biggest pearl at the bottom of the ocean: the sight of herself, loved without limits.

We would love her in her rage.

We would love her in her fear. 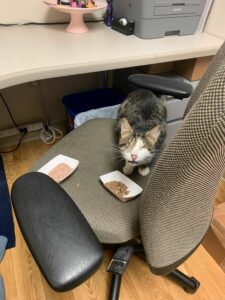 We would love her even if she couldn’t see it.

Our love, received or rejected, would raise an island in the lonely ocean, a haven filled with laughing otters and slapstick sea lions. And Polly, with or without her own anger’s permission, would finally…feel…safe.

We’re not there yet. But we’re getting there.

And a couple of the world’s gentlest gentlemen are helping.

That’s because Polly has moved into the Development Office, where funds are raised and frippery is blogged and, most importantly, Glenn and Jared are growing and glowing.

The cat with the broken larynx and the cat with the broken-for-years heart are Polly’s new roommates. Glenn is battling medical meanies the size of manatees; Jared has feared his way through several years at Tabby’s Place, only to let himself taste love in tidbits and trustlets in the past few months.

By her side, breathing their peace, they are the two great sea turtles carrying Polly farther than she can see. And I, some sort of dented starfish, am waving my arms until she feels all of our warmth.

We’re getting there — “there” being a more peaceful place, even if not exactly Atlantis, not exactly yet.

From her explosive early days to today’s deep dreams in velvet beds, Polly has crossed many oceans. She is not yet my soul-sister — if I even gaze at her for too long, she will awaken and tighten her tiny shoulders — but she is settling, soothing herself, hearing and even smelling our good intentions.

Jared and Glenn are telling her truths as deep as the trenches: “these hairless ones, they are hinky and hapless, but their hearts are right. Their musical taste is terrible. They smell peculiar. They fail to grasp peace, politics, or the proper place of provolone in the cosmos. But their hearts…Pol, there’s something about those hearts.”

There’s something about these three cats together that must be seen with eyes beyond eyes.

They don’t cuddle (other than an isolated perch-sharing moment between Polly and Glenn). They don’t dish over fondue.

They do, in the uncanny way of cats, raise each other’s eyes to the heights. Which happens to be precisely where we’re all climbing, step by breathless step, every day.

Our rucksacks are ripped, overstuffed with squeeze-tuna and pride, Temptations and temptations. Our love comes out garbled, but as long as we keep letting it out, keep letting ourselves be seen, keep beloving and beholding and holding out hope that Polly will feel our hearts, our eyes somehow meet in the middle of the mysterious sea.

And every time I lay eyes on Polly, I am overcome with love.

We don’t know what the tides will bring tomorrow or next month. But together, we can see enough to sail directly for that fog. There is a lighthouse that can’t be quenched, and a perseverance that can’t be unseen.

Polly, and all of us, will finally see ourselves loved.

1 thought on “What Polly sees”