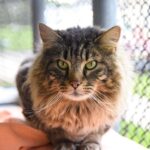 Contrary to what you may have been told, the facts are not flat.

They are, however, flats and sharps.

If we’ve learned anything in nineteen years and four thousand cats, it’s that every living creature is composed entirely of story, and a story is a squirming, stubborn, sing-song thing.

We don’t get to select our own stories from the storehouse, of course. Flipping through the vintage records, Oscar would not have selected “Feline Lower Urinary Tract Disease Fantasia in D-Flat.” (This was Mozart’s original concept, but “The Magic Flute” fared better in focus groups.)

He would not have clapped his paws with pleasure at the sight of a rare issue of “Rage Against Adopters Who Return You.” (They’re much better live, anyway.)

He certainly wouldn’t have saved up his allowance to buy the last copy of “Lunatic Humans Who Shave You Like A Micro-Lion And Announce It On The Internet.” (Although he is pursuing litigation.)

Oscar did not choose these stories.

Although Oscar is, by any standards, a powerful creature (“Write ‘Oscar is The Cheeze Whizzard.’ Write ‘Oscar is an omnipotent potate.’ WRITE ‘POTATE,’ WOMAN. ‘POTATE.’ And bring me a scalloped potato.”), story seized him, as it seizes us all.

One day, he was a dandelion of a kitten, tubing down the river to a tune of his own making. (Let us all pause here to picture Oscar. As. A. Kitten. Let all mortal flesh keep silence before such omnipotent cuteness.)

The next, the tune turned the tide, and the rhapsody turned to rapids, and Oscar’s languid life went over the waterfall. He developed a disease that could block his bladder and block his hopes of adoption and block his ability to wait on the sidewalk overnight for tickets to Rage Against The Dairy Queen.

He was adopted. He was returned. He was relegated to Suite C, where war criminals have decreed that there shall be no wet food until Wet Food Time, which occurs 22 hours fewer each day than Oscar would prefer. He was surrounded by splinterbrains like Carrot and Elijah, seemingly incapable of recognizing his eminence and exalting him appropriately.

The facts would flatten a lesser lyricist. 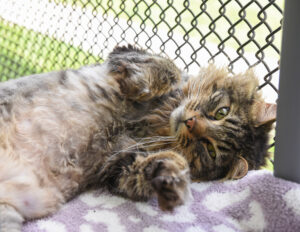 But Oscar, born with the advantage of felinity, remembered what we forget: facts are not flat. The world is not flat. And no melody, no matter how unwanted, can hurl us off the edge of the big, brokenhearted, beautiful beach ball we were all bounced on together.

So Oscar got to work.

He marinated in the melody until he knew it by heart. (“Write ‘by his huge heart. Write ‘HIS HEART HUGE. HIS HEART HEAP STRONG LIKE HERCULES,’ woman.”)

He put on his goggles and lab coat and dissolved the lyrics down to their constituent atoms.

He hung out with the half notes, slid up and down the scales, and swapped stories with the sharps until everything came into sharp focus. 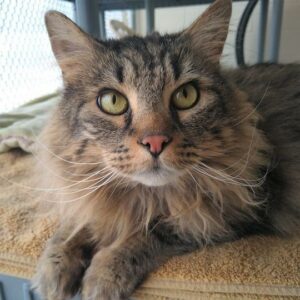 And then, as if for the first time, he sang.

The melody was out of his control, but he wasn’t stuck with someone else’s lyrics. His would not be a sad song. He would purge the dirge and engineer an anthem. He would replace every verse of self-pity with gritty, pretty victory. (“Write ‘Gritty wishes he was this pretty.’ SEND MY PICTURE TO GRITTY, WOMAN.”)

He would, sophisticated creature that he is (“Write ‘him a cosmopolitan debonair man, and also suave. WRITE ‘SUAVE,’ WOMAN.”), create a contrafacta.

(He would also write an open letter to Chefs Boyardee, Bobby Flay, and Guy Fieri, requesting that they concoct an actual arpeggio of cheese and call it “Oscarfactual Fromage.”)

Unsophisticated creature that I am (“You rube, you ragamuffin, you ravioli-head, but I like you. WRITE ‘I LIKE ANGELA,’ WOMAN.”), I learned this about eleven seconds ago, but a contrafacta is a song in which someone (e.g. Oscar, Weird Al) has substituted one text for another, without changing the music.

I think it’s one of the most brilliant things in the world, right up there with the discovery of insulin and Apple Jacks and Gritty himself. 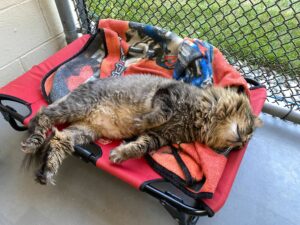 Just think of it: we can’t, most days, change the music.

We can, every day, change the lyrics.

We are composed entirely of story, and that means we have the means to sail with strength and dignity.

So, some waffleheaded human moron shaved your kingly robes into a “lion cut.” You can sing about being the only cat who could carry off “naked” so nattily.

So, your olive tree died, and your supermarket stopped carrying Nutter Butters, and your cat decided she prefers your brother’s lap 98% of the time. You can sing about the fact that there are saplings rising on every continent right now, and the pleasure of Zebra Cakes, and the fact that love only counts if it doesn’t count the percentage of time someone is in your lap. 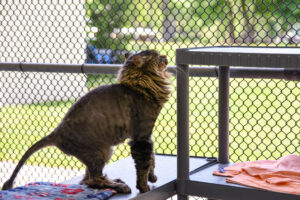 So, your friendship, that really life-giving one, melted like snow. You can sing about the friends who stayed, and the cats who carried you, and the first day you heard yourself laughing again.

So, the record store closed. So, the window of opportunity closed. So, the chapter of your life closed. You can command the verse, call forth the chorus, confound the facts with the full weight of your hope.

You can carry your love like a beach ball, carry your torch into tomorrow, and carry a tune.

It’s yours to turn into a story.