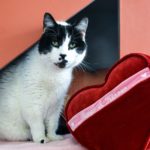 Once upon a time, in the not-so-very long ago, a reasonably young couple moved to a convenient, in-between-where-they-needed-to-be-separately-during-the-day place.
This first shared residence was a very small, very rented, very temporary townhouse that was made complete by the addition of a tortie 15-week-old and a tuxedo 2-year-old of the feline species.

In those early days, despite the kingly size of the male of the hominid species, a queen size bed made for a suitable sleeping arrangement.

Here’s what happened.
Sometime soon after departing these temporary quarters in favor of a more permanent residence, needs changed. Perhaps it had to do with the kitten and youngling growing to full size. Perhaps it had to do with the humans fleshing out a bit. Likely, it was a bit of both. Probably it also had something to do with the total takeover sleep habits of the female hominid.
I’ll never tell.
You see, the taller, yet less-broad-than-Henry-VIII gentleman was getting squeezed to the edges of the queenly mattress. Everything started out okay at bedtime, but the kitties would nestle into the furnace-level, comforting warmth of the king-sized gentleman. Said individual would grow too warm and inch away.

The lady of the house would shift diagonally, such that cold feet could be warmed by the aforementioned heat source. Again, the gentleman would shift away to find cooler climes near the edge of the bed. This was an environmentally unstable situation, yet there seemed to be an obvious solution: upsize to a king size bed.

I can neither confirm nor deny the success of this endeavor. However, years have passed, and the four current cats and two humans all have definitive preferences for nighttime sleeping arrangements.
What I can confirm is that “king size” applies beyond individuals whose height is taller, though girth thankfully less girthy, than that of a particular giant among royalty. “King Size” also applies beyond catalogs whence such grandly built individuals can obtain suitable attire. Furthermore, “king size” applies to more than mattresses.

At Tabby’s Place, it is the hearts of the staff, the volunteers, the adopters, and so many others in the orbit of this sanctuary of planetary proportions that are grand and large, filled with largesse that is far larger than infinity times the mass of their collective physical hearts. Each beat of each heart pumps love and goodness throughout the sanctuary and into the local and global communities.

Then, there are the cats. “King size” doesn’t capture the half of it.
Though queenly in disposition, and with serious doubt that cats care at all about gender, it is definitely fair to say Disco is king size. In this case, king size is more than just about size. Disco is a substantial girl, but it’s her ample charm, in its ever increasing intensity, that is larger than all of the combined kings of Scotland, real, imagined, or depicted in movies.
Sharing the lobby is another biggie size dreamboat: Bellamy. With people, Bellamy borders on shy, yet he enjoys attention and inspires adoration, the likes of which none of the kings of Macedonia (apologies to Alexander the Great) could have ever aspired to. Regardless of the opinions of fellow feline residents, Bellamy rules with his colossal cuddles.
Not to be outdone, the Lounge has its share of giants among felines, those whose royal decrees for attention and snacks are expected to be obeyed. Fenek, Baby, and Shifty have endearing personalities that are sweeter than a collection of king size candy bars. Taking a bite of time to spend with these outsized boys is worth every calorie.

At Tabby’s Place, the cats who are at once large, regal, and charming complete an epic list. A small few of these great (all the meanings!), big guys include Conga, Elijah, and Gator. Any one of them is worthy of all the odes and praises and paeans of all the ages, eras, aeons, and epochs.

We and our beloved sanctuary may someday go the way of Ozymandias and his kingdom. Yet, there is no question that the love we have for these largest of cats, along with their pint size brethren, is indelibly imprinted upon the universe. The king size proportions of love bind the sanctuary, the cats, and each of us together more tightly and beautifully than the intricate weave of the Bayeux Tapestry.
Although the story of Tabby’s Place is unlikely to make it into the archives of great literature, and there is unlikely to be a museum erected to celebrate its existence (statues of litter boxes, anyone?), the sanctuary’s very existence is all the proof we need (along with a few Egyptian mummies) to know that cats are king, no matter their size.
Baby Bellamy conga disco elijah Fenek Gator guest post Shifty