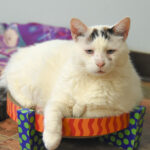 Summon the cymbals and tympanis of autumn.

This, kittens, was The Month.

I don’t mean the month in which fall fell into place, although that’s grand.

I don’t mean the month in which  the universe bestowed us with Snoop Loopz cereal, although that’s transcendent.

I mean the month in which Franklin Sad Eyes Happy Soul Sinatra Rosenberg was adopted.

This is not a drill. FRANKIE. WAS. ADOPTED. 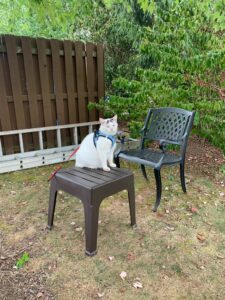 Although other cats have waited longer, Frankie waited wildly.

Although other cats have done it their way, Frankie did it in the least shy way.

Although other cats have had too few regrets to mention, Frankie firebombed the very concept of “regret” every day of his Tabby’s Place life.

Although other cats get cuddled cheek to cheek, Frankie found favor with our staff in an unmatched manner, joining us for daily lunch in his pink stroller; being promenaded like a pasha through our gardens; being forgiven and forgiven and forgiven for constant crimes against felinity.

Although Frankie spent many sunbaths in “the airlock,” our nickname for the new entrance to the lobby (part of our Quinn’s Corner-related renovations), the Sinatra tribute band “Frankie In The Airlock” has not yet scheduled its 2023 North American tour.

Although Frankie is the kind of gentleman who would choose waistcoats and monocles, he has that most modern medium, TikTok, to thank for his triumph. 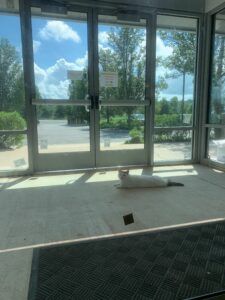 The latter’s tireless efforts — a Facebook crusade, a ferocious campaign, a victorious video vaulting to over 400,000 views — attracted the attention of everyone from King Charles III to Snoop Dogg.

(I’m totally making that up. Snoop Dogg was too busy inventing cereal and crocheting scarves with Martha Stewart.)

But no one needs everyone to love them.

Everybody loves somebody sometimes.

Strangers in the night just might fly each other to the moon.

And even somethin’ stupid like TikTok can turn the world aright. (For something especially right, click here. I believe the ballroom style featured in the final seconds is “Feral Dork,” a close cousin of the foxtrot.)

Supposedly, a few other things did transpire in September, so I suppose we should address them:

Promoted to the Lobby: Charm

Stuff We Learned: When you’re loved, you have the world on a string.

Even if you’re a buffoonish blue-eyed snowball the size of Sicily.

Although this is formally an Epilogues post, and therefore about enormous numbers of cats, it’s really all about Frankie, and the power of persistence, and the fact that every single one of us — even if we bite our neighbors, even if we grandstand like generals, even if we pretend to be mafiosi or at least Sinatri — deserves to be loved…all the way.

The best is yet to come.

Now let’s all crank up Frankie In The Airlock’s Greatest Hits and dance like the feral dorks we are.