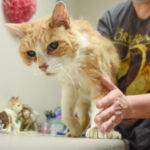 Tearstained preface: this post, written weeks ago, was not meant to be a “Forever Loved.”

Bartholomew, the improbable bard and ballast of the Development Office, was never “meant” to survive past a few weeks…but he did, with tenderness and derring-do.

Which meant the blind, deaf seer was never meant to leave us.

But that’s what he did, on the first Sunday of September. He did, and he didn’t…

If Tabby’s Place is a wishing well, the water level is always rising.

But our cats and miscellaneous humans aren’t throwing their pennies in hopes of lotteries or Lamborghinis.

They’re wishing each other well, and that’s a far more costly endeavor.

A friend recently shared with me that, as a piccolo gattino, he was made to visit his grandfather every Sunday. At first, he was afraid of the man, a cigar-puffing monolith who spoke only Italian and regularly made use of a spittoon.

But then came the words and the smile: “Ti voglio bene,” Nonno whispered, taking my frightened kitten of a friend by the face and beaming like the sun over Sicily.

These are the kind of words that make us worthy of the gift of language.

Ti voglio bene is a way of life at Tabby’s Place, as effortless as meatballs rolling downhill. (Let the reader understand: 100/100 Tabby’s Place cats would prefer the meatballs, but you can’t always get what you want, no matter how much the mean idiot humans want good things for you.)

With each new arrival, the words fall out of our souls, like pine nuts from some great half-moon cookie in the sky.

A shelter refugee, angry to be in New Jersey, angry to be passed over, angry at the past and the present and the pesto-bitter punch of the probable future: Ti voglio bene.

A leaning tower, eighteen years of ancient ruins, wondering if love can become Michelangelo and chisel a new day from aeons of exhaustion: Ti voglio bene. 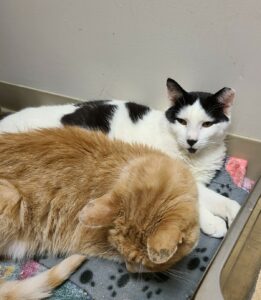 We wish them well, and they feel it, and suddenly wishing isn’t a child’s game, it’s the name of the game where everyone wins.

Buffo thing, this business of wanting good for somebody else. It’s impossible to hate anyone you’re actively wishing well. I dare you to try it: pick someone really prickly, I mean the sour-smirked pickle jar of a Problem Person who makes you feel like a boot-stomped biscotto, and start praying for them, or exuberantly wishing them happiness, or picturing their life going all golden like the September leaves.

It might feel a little revolting at first, the spiritual equivalent of sticking your head into a spittoon.

But mark my words: the longer you voglio bene, the larger your heart will grow. Even for them.

Or they might not. What they do is not the point. You may never hear the penny hit bottom.

Bartholomew certainly didn’t expect to hear much when he first hunkered down Haroldside.

This is not a neighborhood in Brooklyn, but a borough of the Development Office at Tabby’s Place. Like an old man strumming his mandolin down the street, Bartholomew was in another country of his mind when he came to Harold’s doorstep. But then, marrone; he was not alone, and the present pulled him back to this place and time.

Bart could neither see nor hear Harold; we have no reason to believe Harold exuded the aroma of meatballs; but still, Bart sensed a paesano, and without worrying over the consequences, he wished him well.

Which is to say, he snuggled up tight.

He believed in the power of his own love.

And don’t let his physical frailty fool you: he was a powerful creature, that Bart. 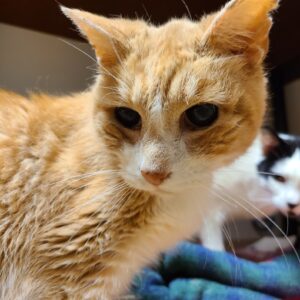 Harold had two choices. (Well, three, if you count the ever-present option to sing Volare at the top of one’s lungs. Don’t knock it ’til you’ve tried it.) He could roll up as tight as a meatball, afraid of the interloper and the interruption and the interaction with the unknown.

Or he could pull out his own mandolin, grab the last half-cannoli, and say, “whoever you are, old man, ti voglio bene. You, I want good.”

As the well-wishing washed over two very different boys, wariness sank to the bottom. Kerplunk.

Worry went the way of the last half-cannoli.

And as they leaned into each other, Bartholomew and Harold found a towering truth that will never topple: seek the good of somebody else, and see your own well overflow.

We’re not talking a demitasse cup here; I mean the Mediterranean itself, a sea of sweetness that will give you strength for perplexities and problems and Problem People, even when they happen to be yourself. 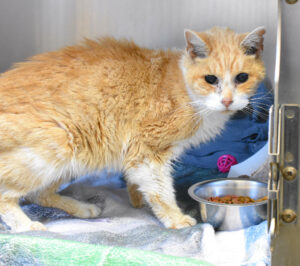 It’s a secret that sustains these feline fratelli even though their paths have parted.

Bartholomew’s love has not lost its power, even though we have lost his presence.

Bart’s love, like his spirit, was mightier than his sweet-potato-spaghetti limbs would suggest.

Right through his final day on earth, he called us to the power that needs neither words nor sight.

And so, today, we weep. But not bitterly, and not as those left out of the great secret.

It’s a secret that survives every parting, while parting the curtains to new dawns every fresh-baked day.

It’s been the secret of Nonnos and gatos since time began.

It’s ours for the wishing. 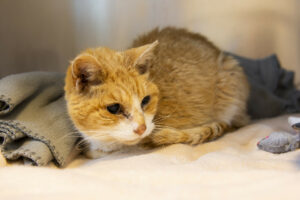 Grab your pennies. Leave the spittoon. Take the cannoli.

Bart, prince of the quiet party, king of kindness, I believe that you see and hear today. You’re savoring all the sensory scrumptiousness that you missed here, sure, but more than that, you’re merrymaking to music that earth-ears can’t fathom. You see the joy that we’re too scared to dream of.

I hope you’ll remember us and empower us and send your strength to help us to keep dreaming.

I hope you can still hear our songs, sweeter and truer for the time we spent together.

I know you’re wishing us well.

I know we will hold you again.

Until then, and beyond then, and until every “then” is pleated into presence...ti voglio bene, siempre e empre.