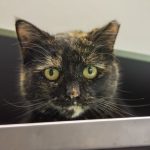 These are the times that call for parchment and inkwells.

These are the hours for which we wait.

These are the days of female cats in Suite FIV.

Many moons have risen and fallen since the triumphal exit of our last female FIV+ cat. After an impressive tenure at Tabby’s Place, Mona was adopted in 2018. Long before her reign, we hosted Penelope and Princess Zara. But for the most part, Suite FIV has been all dudes, all the time.

Not gentlemen. Not even guys. These are definite dudes, every one a dingus.

This is not a coincidence; FIV is more common in male cats. Unneutered,* free-roaming males are the felines most fixin’ to fight, and deep bite wounds are the usual method for transmitting FIV. It’s the rare female cat who will inflict such punchy puncture wounds. Fortunately, it’s also the rare female cat who finds herself on the receiving end of them (or on the receiving end of another kind of feline indignity, which I will leave to your imagination).

Rare, but not impossible.
And so we are graced with rare, impossibly precious female FIV+ cats.

As of this writing, the ladies — two! — are living beneath the radar. Norah and Shiny are as welcome as dainty macarons in a field of broken Fritos, but the freewheeling fellas are, for now, oblivious.

Take the striped troika of Liam, Rufus and Toby. On the wrong day, any one of them will attempt to mash and smash his neighbors like so many Frito crumbs. But the longer these lookalike bad boys bide their time together, the more they all just want to nap and eat and laze about like frat boys who slept through rush week. (“Our own frat will be better anyway. Tabba Tabba Tabba.”) There are still the occasional scuffles, but they lessen as the dudes get larger and older and dudelier.

But if they’re no longer paying heed to each other’s obnoxiousness (“YOU LOOK LIKE ME AND I MUST SLAY YOU! I AM THE DUDELIEST GUY IN SUITE…oh look, fish mush!”), neither are they noticing the beauty that’s just blessed their world.

The same is true for our more mannerly dudes. Silver star Shea has earned a reputation as Newbie Welcomer Extraordinaire, but he hasn’t yet taken a shine to Shiny or worked on an infinite playlist with Norah. Nor has Oscar, the man who melts, the mush who smushes other cats’ hearts and defenses.

Gregory the Great just got adopted, so he shall be forgiven for overlooking the incoming angels.

Lester, the longest-time continuous resident of Suite FIV, has no such excuse, except to say that he finds “laying semi-comatose in the solarium” far more interesting than “baking a bundt to welcome new neighbors.”

Did I tell you they were a pack of dinguses, or what? They don’t know their sardines from their Shinola. Or their Shinorah. (Yeah, yeah, insert groans here.)

Norah, all tortoiseshell softness, is a study in grace, elegant without trying and sweeter than the smoothest jazz. She lost her family to a Steinbeck-level siege of sorrows, but she’s clearly not lost hope, or happiness, or the invincible music that makes any creature beautiful. Like nearly all the female FIV+ cats before her, she will almost certainly be adopted before we fully learn her melody.

Shiny is a softer song, gazing out with one clouded eye that tells an older, longer tale. After an eon outdoors, she’s a bit more excited about breakfast and second breakfast than she is about us, but she’s given us glimpses of great love. We’ll feed her in all the ways she needs; she’s already begun feeding us with her beauty and her dignity and her shine.

Will the dinguses awaken to the miracles in their midst? I wouldn’t hold my breath. But if you should walk by the Suite FIV solarium and see a splash of splendor among the savages, celebrate with us. The FIV+ girls are here.

*I’m always bemused that spellcheck dislikes “unneutered.” Apparently this is not a word often used outside the animal welfare community. I suppose you wouldn’t say, “I was behind three unneutered males in line at the pharmacy today.” But, you could.