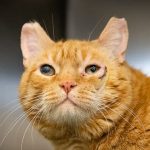 Tinseltown can keep its hostless hullabaloo and self-congratulatory shindigs.

We don’t need no stinkin’ Oscars. 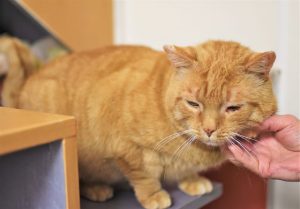 Yes, you academy of adorers; that is The Oscar being petted by A Human, with no supporting performance by teeth.

Not so long ago, this was the stuff of Hollywood fantasy. Oscar was perfectly content to typecast himself as a hissing, spitting, lunging lunk of perpetual anger. If he were a Harry, he’d be Dirty. If he were a Steve, he’d be McQueen. And if he were a fish, he’d be an Oscar:

“Oscars are infamous for their aggression … Those who are brave enough to keep them may initially be attracted by their appearance … These are temperamental creatures that should only be looked after by experienced fish keepers.”

What’s in a name? Apparently, everything. 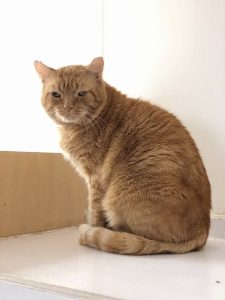 One great artist was promising a sweeter plot line for Oscar from the opening credits. The director of Oscar’s deliverance — his original rescuer — was able to pet and moosh and hug and snug him all along, giving us hope that the big lug could break type.

This is easier said than done. Over and over again, no sooner did Oscar’s rescuer leave the building, than he would return to his sulky, sour, spitty ways. If any hapless human attempted to be his best supporting snuggler, there would be blood.

But from Hollywood to the fish tank to Suite FIV, change comes in unexpected ways. In Oscar’s case, it took a trio of stellar agents to get him into a newer, truer role. Dr. C, Denise and Jess gave Oscar a new look by performing surgery on his left eye. Oscar declined their bonus offer of collagen fillers and chin implants, opting just to have his entropion corrected.

It’s hard to enjoy the picture show if it hurts to picture the picture. But no more would Oscar’s eyelashes scratch his skeptical green eye. Looking out on the world anew, Oscar saw a fresh role for himself.

A snuggler.
A sweetheart.
A Harry more Potter than Dirty.
A Steve more Harvey than McQueen.
An Oscar more Oscar the Cat than Oscar the Fish.

And Oscar the Cat was in love with our species.

It all happened flashbulb-fast, as one mystified staff member after another nuzzled the “new” Oscar during his Hospital stay. He was solid gold. He was embraceable Oscar. He was all aglow in our applause.

And he is not ready to give up his classic casting just yet.

Since returning to Suite FIV, Oscar has shown that he’d like to be considered for every movie. The new, nuzzly Oscar does not replace the former fighting fish; he just complements him. Some days, Oscar is our leading man of love; other days, he’s the character actor with cutting words and teeth.

Every day, he’s golden. And the award for Best Performance by an Oscar goes to…

2 thoughts on “The Oscar”