Donate
Phases of the Luna 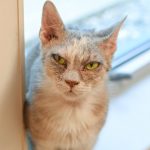 Luna did not vote in the New Hampshire primary.

Luna did not watch the Oscars.

Luna did not miss anything. 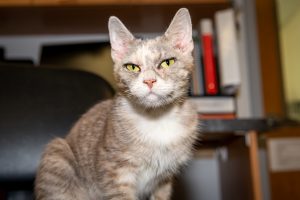 Luna, she of pointy face and pushy love, does not, as a rule, miss anything. Exquisitely alert, endlessly exploring, she is a pastel comet, and the world is her technicolor sky.

The littlest tortie may be making up for lost time. Luna spent too many moons writhing within her own skin, too painful to prance. This is saying a lot for a feline fireball who would prance across hot coals. Luna takes “exuberance and exhilaration” very seriously. But even Luna, she of gutsy glee and relentless joy, couldn’t out-awesome eosinophilic dermatitis.

From Kansas to New Jersey, Luna lived inside a cruel cycle. Her perfect, pointy face would itch; she would scratch; pain would spew forth like a volcano, Luna’s face erupting and eroding and ulcerating all the while. By the time we met her, Luna could scarcely keep her enormous eyes open from the pain and swelling. 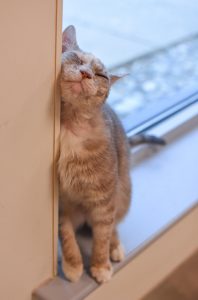 But back to the Midwest for a moment. It’s no coincidence that some of our raddest residents have come from a single supershelter in Kansas City. From Pixie to Inigo Montoya to Luna herself, these new New Jerseyans have each been contenders, in their time, for the title of Very Best Cat (VBC).* The great souls at the Kansas City shelter love so strongly and so truly that their cats glow brighter than a prairie moon. Each one bears the unmistakable marks of having been cherished.

Alas, Luna also bore the unmistakable marks of the most severe skin allergies we’d ever seen. The Kansas City shelter simply couldn’t provide the intensive medical treatments she needed. But we’re the particular band of weirdos who focus on the hopeless. We were grateful to be Tabby’s Place, and so to be able to take on the crazy-costly care of one complicated, crashingly spectacular Lunatic.

And Luna’s not missing a moment.

Since diagnosing Her Royal Lunacy, our vet team — speaking of great souls — has worked with specialists to microbrew a highly personalized treatment plan. Luna is presently on probiotics, two different allergy medications, and the all-important hypoallergenic food that keeps her skin from attempting revolution. 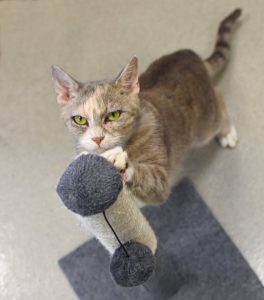 Luna, on the other hand, lives for revolution.

Blame it on a full moon, but Luna has been located — more than once — in the garbage can, on the hunt for contraband food. Even a minor exposure to allergenic tasties could cause her excruciating pain, so we’re vigilant (“YOU’RE MEAN! TELL THEM YOU’RE MEAN!” – Luna) about keeping such stuff away from Luna. Luna is vigilant about testing our vigilance.

Since it’s impossible to maintain this kind of control in a Suite, Luna has the high honor of living in territory once held by Bugsy and Miriam and other greats: Hospital. Here she scales the heights, leaping from floor to shoulder to sky-high cabinets, long pastel legs flying like streamers. Here she wallops you with irresistible love, drooling and delighting in the snuggles that were once too painful to bear. (“ALL THE DROOL ARE FOR YOU!”)

Life is a celebration. 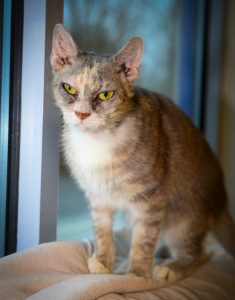 So Luna has been far too busy head-bonking all of humanity, rolling in bliss (“NO MORE HURTS! ALL THE FEELS ARE GOOD!”) and scouting Funyuns and Fancy Feast to pay any heed to the recent turnings of culture and politics.

She’s also quite occupied with fermenting revolution among her feline neighbors.

Living in Hospital, Luna generally only sees other cats when they are (a) anesthetized for surgery (“HA HA! YOU LOOKS DEADS!”) or (b) caged for recovery or monitoring (“HA HA! YOU IN JAIL!”). Such dunderheads are useless when it comes to revolution, so Luna doesn’t even bother. Besides, she’s got a tough nut to crack in Clark.

Yes, Clark the Beautiful Boy shares quarters with Luna the Mad Queen. It wouldn’t be quite fair to say that either of them likes the other (“HE ARE STUPID FANCY BOY!”), and initially there was a bit of tension (“HE STUPID!!!!!”), but at this point they’ve worked out a system no less intricate than Luna’s medical protocol. Clark meditates quietly in a donut bed; Luna runs riot continually and ceaselessly. The humans come to Clark; Luna launches onto the humans. Everyone gets what they need. 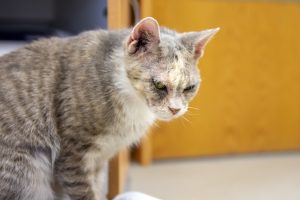 Until recently, Clark also got what he doesn’t need: contraband treats. Some unidentified well-meaning humans felt bad for Luna’s fancy roommate. Suffice to say Luna reported the incident (“NO TREATS FOR HIM!”).

And, suffice to say, Luna remains one of the VBCs in the history of Tabby’s Place. We’re over the moon — several galaxies away, in fact, swooning and sopping up Luna-drool from our shoulders and snuggling the tiny cat who loves life and hugs and herself so so much. Surely, I tell myself, Luna will get adopted. Surely, it will be soon, and break our hearts, and remind us that human goodness far exceeds the annoyances of crusty skin and the eye-popping expenses of eosinophilic dermatitis.

But you know and I know: Luna’s adoption may or may not come. Many moons may wax and wane before that day, and “the right person” may never turn his or her face to the light of Luna. We have no guarantees.

Luna will not miss anything, least of all love. Her life will not be lacking in any good thing. Under quiet new moons and slender crescents, as gibbous grows full and glows upon us all, Luna will know she is good, and safe, and held by a love she can’t lose.

Even if she jumps in the garbage can again.

*It is, of course, a hundred-twenty-way tie. Except for Bucca, who wins.

2 thoughts on “Phases of the Luna”