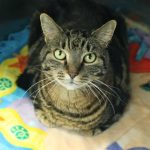 For a cat contained in a hospital, Miriam was a far-ranging voyager. 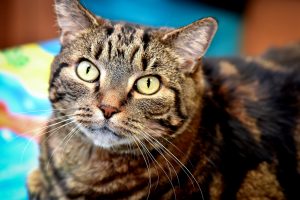 Miriam was always a pioneer at Tabby’s Place.

She was one of our few and early “classic tabbies,” those Impressionist masterpieces more common across the pond than in the US, all whorls and swirls where other tabbies are tidy stripes.

She was (fortunately) the first and only cat to be returned because her adopter was having foot surgery. I will withhold my uncharitable commentary here, accepting that we can’t know another person’s mind and heart and needs and aches. Mercy is always appropriate. At any rate, Miriam was adopted as a kitten in 2006, only to return to us rather larger than a kitten. 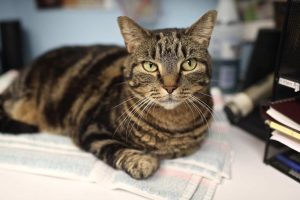 She was not the first cat to become rather larger than a submarine, but she did carry her weight with trailblazing panache.

She was the first cat to be added to the mailing lists of several prestigious universities and academic journals. When I was a young and green Development Director c. 2008, I requested Planned Giving information from all kinds of organizations, for inspiration and some wisp of an idea of what fundraising should look like. Instead of my own name, I signed up as one Miriam Rosenberg. She continues to receive heartfelt fundraising appeals from Best Friends and The Christian Century, although I’m afraid Notre Dame has given up on her.

She was the first cat to outsmart collars and sweaters and swaddlings of all sorts to tear a terrible hole in the back of her own neck. What started as a run-of-the-mill surgery to remove a lump turned into months of maddening self-trauma and a diagnosis of feline hyperesthesia syndrome. No medications or creative fashions could keep Miriam from mangling her skin. By some feat of grace, we finally figured out that the one thing that would bring her peace would be the total absence of all other cats. 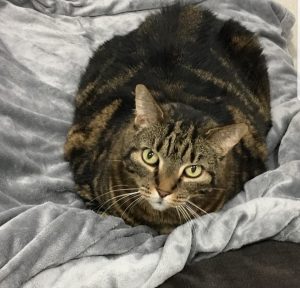 Easy peasy at a cat sanctuary.

And so she was not quite the first cat to move into our Hospital, but certainly the largest by all definitions. She joined and learned to accept Denise, Lacey (may she rest in peace and rise in power), and the endless series of cats who appeared either anesthetized or behind recovery-cage bars. These companions were tolerable to our trailblazer; the self-trauma ceased altogether, and Miriam grew…well, fat(ter) and happy.

We, used to loving Miriam since 2006, grew complacent.
It wasn’t the first time, and it wouldn’t be the last; we came to think she would “just always be here.”

When you love a creature long enough, even though your brain knows her lifespan is a tiny biscuit of a thing, you settle into a sort of silly assumption. I love you; you have been here a long time; ergo, you will be here for all time, or at least all of my time. 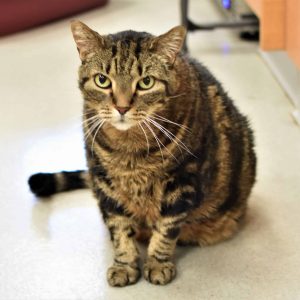 I suppose it’s an honest way of shielding ourselves from perpetual anguish. If we lived in constant awareness of the losses looming all around us, we’d be in a collective group hug/fetal position on the floor. Taking the cats for granted is a way of taking our sanity in hand each day. We’ll deal with sorrow when it comes; today, the music is playing, and love can convince us it will play on forever.

Actually, I’m of the opinion that it will.

But in the flesh and blood and sighs of this life, the music seems to stop. The cat who sashayed through a decade of our lives, shouting her own existence with pizzazz and punch, shot out of our sight. Love makes all sorts of promises that exceed biscuit-sized lifespans, but brain tumors and kidney failure and fading appetites are real, and so are the grisly “goodbyes” that we never fully feel are coming.

And we never fully feel healed, not this side of Miriam’s last voyage. 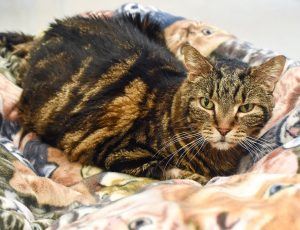 But, fellow travelers, I believe we will. I believe with every fiber of my being (and I’m more fibrous than an artichoke) that death will not have the last word, however loud it shouts and final it feels. I can’t begin to imagine what life beyond death will look like, but I know to my marrow that we have friends waiting there.

Waiting, and strutting, and sashaying, as pioneers and classics do.

In the meantime, heaven help us if we don’t live with all our might. Miriam would want it no other way. May we be all that we were made to be, and do it with vim and volume and class and sass and a little bit of style.

Until we meet again, magnificent Miriam.

PS: If you’re inclined to do such things, please say a little prayer for Denise, our Senior Veterinary Technician. As Miriam’s devoted companion and the brunt of Miriam’s Miriamity for 2+ years, she’s aching in ways the rest of us can only imagine. Thank you.