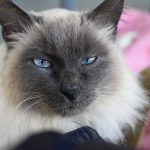 There are many ways to mask your identity.

One of the most effective: surround yourself with idiots who can’t even recognize you undisguised. 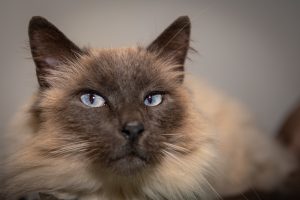 If you pay entirely too much attention to detail on this blog, you may have noticed that “Clara Rose” arrived and was never again mentioned; “Clark” was suddenly present without ever having formally arrived.

Was Clara so unremarkable that she received no comment?
Did Clark simply manifest in a haze of Himalayan power?
Or do we have a certain soft-haired superhero with the power to expose our idiocy?

Yes, kittens; we’ve done it again. We thought we had a glamour girl when, in fact, a most dudely guy had joined our ranks. Clara Rose has “transformed” into Clark, no phone booth or cape necessary. 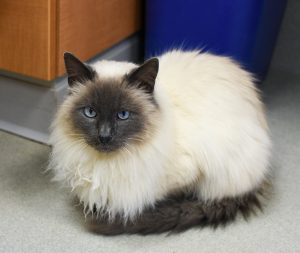 Being a study in grace and charity, Clark would be quick to defend us. There were extenuating circumstances in our blunder; Clark’s compassionate rescuer told us he was female; and even Steven Tyler would conclude that dude looks like a lady.

He is also every inch a saint, sweet from his senior soul to the tips of his tremendous mane. Despite his days of woe (more on that in a moment), he’s most likely to be the cat voted Least Likely To Judge You. He’s too busy love-smothering every creature in sight to judge them, or his circumstances, or life itself, harshly.

Clark is a superhero of joy.

But it’s not his beauty, nor even his benevolence, that makes him so super. A gorgeous creature with a charmed life might be expected to ooze good spirits. (Then again, many beasts of all species who fit that description are incorrigible grumps. But we shall not treat them today.)

Yet Clark, like most Tabby’s Place cats, had a past that was anything but placid. He may look fit for a Renoir painting, all soft focus and pastel peace, but Clark’s Life Before was more like a Pollack: harsh. Chaotic. Arguably absurd. 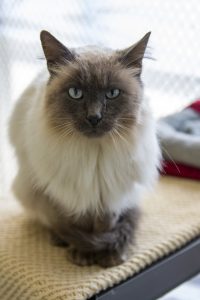 How else to account for the fact that a cat — and such a cat as this! — was found all alone, wandering New Jersey without a friend or a food source or a fawning train of angel choirs singing his glories? Clark is one of the kindest, coolest, most bewilderingly beautiful creatures who has ever walked this earth…and still he was abandoned?

It makes no sense. It makes us ache. It’s outrageous and obscene and absurd.

We will not make tidy sense of this life, not in this lifetime. But we will make it better.

And we will — Clark knows — make enormous, embarrassing mistakes along the way.

But we’re walking the way together, and I have it on good authority that love covers over a multitude of blunders. With Clark’s splendor in our eyes and his puddle of purring plush in our laps, we’ll paint a world that is, if slightly short of heroic, still rather beautiful.

Epilogues: March 2021
Rituals
Recurring themes
Bendy like a cat, you are
Level 4 musings