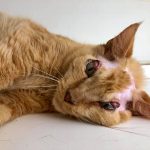 His name is Inigo Montoya.

We know nothing about his father.

But first, I’m afraid I must share some recent tension. The Tabby’s Place staff is violently divided these days. If you thought the situation in the Strait of Hormuz was tense, swing by our Lounge when the subject of one orange tabby arises.

“It’s the best name we’ve ever had. MANDY PATINKIN!”
“Any two-name name is a steaming pile of excrement.”
“I prefer just ‘Montoya.'”
“Can we agree that anything related to The Princess Bride is a winner?”
“I never saw that movie, but it looks stupid.”
“PREPARE TO DIE!” 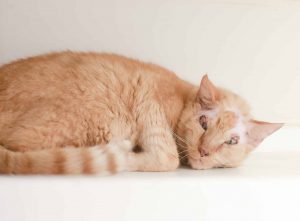 Half a sanctuary away, Inigo Montoya (you may have guessed that I was the first and fourth opinions above) is blissfully oblivious to the debate. We’re just grateful that he has the chance to be blissful at all.

Like his name, Inigo’s past is a bit confusing.

Some bright morning long ago, Inigo was a wee wandering kitten. Picture a Cheez Doodle turned feline, a tiny orange puff (“orinch,” if you prefer), scarcely heavy enough not to waft away on a warm Midwestern breeze. (Have I mentioned that this all took place in Missouri?)

A kindly soul took compassion on itty-bitty Inigo and began feeding him. This all sounds very fair and bright until you consider the fact that she did not take him in. Think about it. 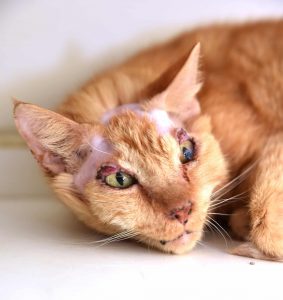 But so it went, and hungry, hamster-sized Inigo Montoya had enough food in his belly to puff along another day. Through many years, the kindly yet inconceivable soul continued feeding Inigo as he grew. It wasn’t a bad life.

I’m told it was the postman who peeped Inigo’s injury first. The handsome orange tom, once brighter than a buttercup, was almost too torn-up to behold. You could almost say he’d been mostly dead all day. Some sort of brutal beast — I’m guessing a rodent of unusual size — had attacked Inigo, and his face told a terrible tattered tale.

The mailman assumed Inigo’s owner-of-sorts would take care of the ravaged cat, but after three weeks of seeing Inigo’s agony, he could keep silent no longer. The good postman called Animal Control; they contacted Inigo’s person; and she, for reasons we don’t presume to understand, surrendered him, wounded and weary, to a public shelter. 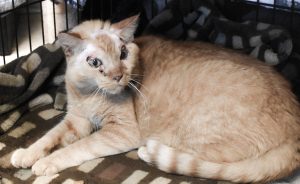 If Inigo’s wretched wounds weren’t enough, a blood test during his intake exam revealed that he was also FIV+. The outdoor years had not been kind, and, without a miracle of love, the future would be bleaker still.

But by now, you know how the story ends.

All along the way from Missouri to New Jersey, there were miracle men and women making a path for Inigo Montoya. Where most shelters would consider him no one of consequence, everyone at Tabby’s Place would give a finger or six just to meet Inigo. We welcomed him — and fellow traveling companion Nina, from the same shelter — with giddy glee.

A few short weeks later, the uncommonly brave boy was warming up to Stafford and Jonathan — the Boss Man himself — in the catbird’s seat at Tabby’s Place. Our late, loved-forever Sherbet would surely approve of the orinch individual taking her place. 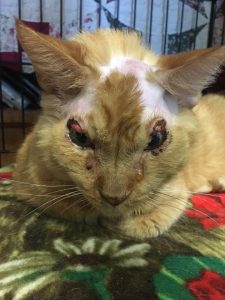 If ever Inigo Montoya believed that life is pain, he’s being forced to reevaluate things now. He has one roommate who loves to snuggle; another roommate who loves to run sanctuaries for cats from hopeless situations; and galumphing hordes of human beans who love to love him madly. Inigo’s scars are far from invisible to us. But, far from rendering him gruesome or ghastly, they tell us that he is a cat who survived, and the days of thriving are upon us.

Fail to see his glory? Inconceivable!

There’s just one complicating factor remaining. Inigo Montoya Rosenberg does not know what to make of his namesake’s catchphrase. Where the Inigo of Mr. Patinkin’s performance was determined to avenge his father, the Inigo of our affection knows nothing of vengeance. Neither the beast who battered him nor the human who under-loved him are on Inigo’s mind — and, if they were, he wouldn’t be spending his peace on planning their doom.

Inigo, quiet and content, is just coming to cherish a life well-loved.
Take a break from bliss to nurse old anger?
Inconceivable!

PS: If you caught all the Princess Bride references in this post and enjoyed them, I think we just became best friends. If you caught them and were highly irritated, sorry/not sorry.

1 thought on “Prepare to sigh”