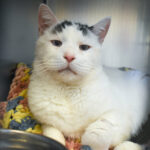 If I were to hold public office, my first act would be to end war and redirect every battle-dollar to feeding everyone of every species, preferably at the same table, whilst we all sing ballads and talk tenderly about our edifying differences.

My second act would be to mandate that we all use the word “stoked!” more often. (Exclamation point non-negotiable, or I will declare war.) 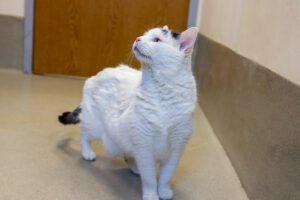 My first political priority was established by every cat who ever lived, the Beatitudes, and a steady childhood diet of Pete Seeger songs.

My second one was established by Frankie Rosenberg.

Frankie — Francis, “Frankie Blue Eyes,” Son of Sinatra, Son of Thunder, Son of Strangeness — is nothing so much as stoked!.

This would not necessarily be the first adjective you would expect from this particular individual. With an expression permanently stuck on “sadder than war” and an age somewhere north of Methuselah, the cottony crooner with robin’s-egg eyes should be solemn. 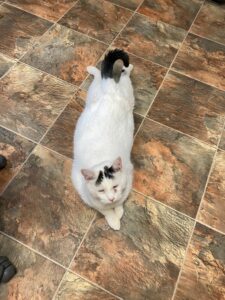 Yes. And I should be dignified, and you should be able to resist eating an entire sleeve of Golden Oreos, and the Rolling Stones should be done making music at age 750.

But it’s a fortunate thing for the entire world that we know how to shoot out of our “shoulds” like asteroids.

Of all the spring flowers festooning the Community Room, Frankie — the festive, flapdoodly, fearless fossil — is the boldest. Among tender blooms and dewy blossoms, the wiry white iris stands tall.

And he stands for stoked! in all its shades.

Frankie careened into the Community Room with his longtime companion, fellow pre-Cambrian artifact Jeannie. But where Jeannie tiptoed through the tulips, Frankie crashed through the garden gate like the Kool-Aid man, if the Kool-Aid man was ten times more crazed, and his pitcher was spiked with several shots of Fireball. 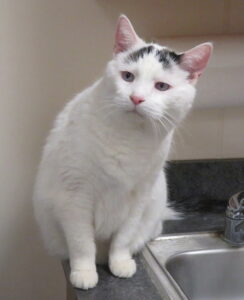 Frankie flipped some people out.

By “some people,” I mean cats. When it comes to humans, Frankie is the crooner who will send you into a permanent state of swoonage. Frankie loves you more than music. Frankie thinks you should keep up with your poetry. Frankie will gaze into your eyes and heal your secret insecurities and wallpaper you with white-iris fur until you feel new again. 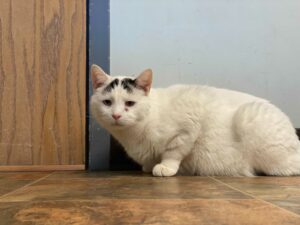 Unless you’re one of those people who happens to be a cat.

If Frankie’s first order of business upon taking office as Eminent Elderly Emperor was “racing out the door so as to extend empire to the Lobby,” his second was, well, racing through all boundaries of neighborly niceness.

He danced directly into Dani. (Here Dani interjects: “he whooped my tuckus. This is no place for metaphor, woman.”)

He pounced on Pearl.

He violenced Verde with a vigor that made the word “violence” very much a verb.

He earned time-outs, a training tool that a cat of his age should be ashamed of, except that cats brook no shame, especially not Eminent Elderly Emperors who moonlight as mob bosses.

He was misunderstood. (I can neither confirm nor deny that he commanded me to write that. I can readily confirm that I am incapable of denying his requests/commands.) 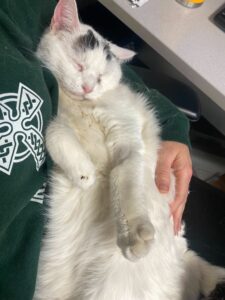 He was simply trying to stoke something that he feared, in his frank, frantic, frantasic heart, had long gone stale.

He was, like every good leader, genuinely concerned for the welfare of his people. And dangit if he wasn’t going to get down in the trenches and the barrios and the pineapple-shaped beds to shake them up and shape them back into a sense of perpetual, stoked! splendor.

When Frankie looked around the Community Room, he saw creatures frightened of their own courage.

Unlike their captain, they were scared to be too stoked!. They glimpsed their own muchness in the mirror, and jumped so high they bumped the constellations. Their tails poofed out in terror when they got a good look at their own age or rage or loneliness or loudness or longings. Some people were simply, dangerously short of “stoked!”.

By “some people,” I mean human beans. 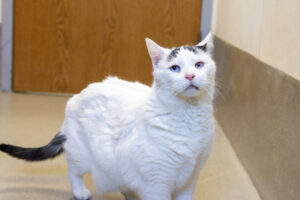 And so Frankie set bonfires.

But it was all in the interest of bringing us — kicking and flailing and fearing and flying — to the fiery edge of dawn. And when you see that sunrise, and the furtive peeks of your own powers, you can’t be anything other than, well, stoked!

Shouldn’t we be, too?

Stoked! to live in a world of iris-white cats with blue pinwheel eyes. Stoked! to occupy a blue marble in an ever-expanding diorama of stars and moons and mysteries. Stoked! to be here, together, in May of 2022, alive, awake, accompanied by cats and saints and angels and oddballs like each other. 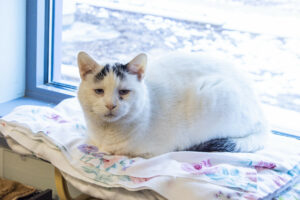 Stoked! is our birthright. But we forget. We wilt.  And so Frankie — Father of Zest, Cannonball of Courage, Flying Fireflower — will keep stoking our courage. He’ll do it his way.

He’ll keep stalking our secrets, until we realize that the silly stuff that makes us “us” is our sacred offering to a weary, war-ry world.

He’ll keep sticking his head into our flowerbeds, until we rise up, stoked!, to offer our own odd petals to the parade float.

He’ll keep demanding we stroke his ego and his snow-in-springtime fur and then his ego again.

And his true, blue eyes will see us through to the day we can make our own stand in mending the world.

Frankie wants us to be stoked! (and, might I add, not in a shy way).

He’s not afraid to bust some heads on the way to his goal.

So let’s bust some fear and break some chains and blaze some fiery arcs through the sky. Just thinking about it, I’m feeling stoked!

*I have been instructed to note that, although Frankie’s band is STOKED!, Anka would really, really, really like to start a band called Debris, and Valerie has her heart set on Certain Onions. I just write what they tell me, people.