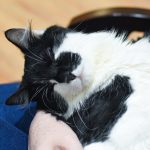 Ever wonder why such a high percentage of Christmas cards show just the wise men?

No Nativity; no angels; just three dudes in the desert.

Not to knock those madcap magi, but wouldn’t you love a card depicting the sky filled end-to-end with angels?

I promise this pertains to cats.

Whatever you do or don’t believe, and wherever this “holiday season” finds you, I know with a high degree of confidence that you need angels, and not just a few. Like all years, 2019 has given and 2019 has taken away, and now it’s a little yellow and raggedy and emitting a funny smell. We’re weary and grateful and worn, all of us.

The wisdom of the “wise” may not be enough.

There are voices that will tell us that what we’re doing at Tabby’s Place is unwise at best. It’s impractical; it’s expensive; it’s a fine way to get your heart shredded over and over and over again: Cisco. Sherbet. Webster.

But without those angels in the sky, our lives would have been dreadfully dimmed. Without our impractical love, this strange little parable of a place would never have gotten off the ground, much less cherished 3,000 lives and counting (not counting human beans). The voices are not louder than the angels.

There are voices — albeit not those of Mr. Rogers or Santa Claus — that will tell us that we are not enough. We are a staff of about fifteen and a volunteer army of about two hundred, and we are outrageous and courageous enough to think we do some serious good, but are our heads so dented that we think we’re really making a dent in “the problem” of homeless cats?

Our heads are deeply dented, yes. “The problem” is bigger than any of us and all of us. But it’s not bigger than the grand “all,” the kingdom of love that extends beyond our doors and our sight. Our love is necessary. Our love is victorious. Nothing shall be impossible with the angels.

Then there are voices that will tell us there are no angels at all. Weary from straining through their telescopes, wounded by empty skies, they are trying to protect us. Better not to expect angels than to weep, curled like a cat on the dark, cold ground.

But I tell you, the angels are real.

What else are we to make of a cat like Shiny? Bounced around shelters ’til she was shaggy-haired, cloudy-eyed and scuffed with a strange skin condition, the FIV+ fringe of a feline could have carried a placard reading “NOTHING SPECIAL.” But angels don’t have eyes for surface summaries, and angels all along the way ushered Shiny from safety to safety, from love to love, from sweetness to…Stafford and Jonathan. Yes, Shiny is now spending her days in the company of two of our most interesting characters. (Angels have an awesome sense of humor.)

Or how about Shadow? His owner’s heart and life were broken by sorrow, multiplied a millionfold by the need to find a home for his three elderly cats. Such things seem impossible, but the impossible strangeness of Tabby’s Place became an answered prayer. Shadow — together with Cindy and Chloe — found their footing here, and today Shadow’s busy being an angel in his own right, mooning over June and keeping her company in their shared, St. Bernard-sized bed. (The angels can be lavish with their gifts.)

What of Rascal, the inscrutable, wonky-legged wonder who was too strange for a shelter, too needy for a suite? Against all the odds of a cold and impersonal world, Rascal and his limpy legs found their way to the Lobby of Tabby’s Place. Approximately twelve hours a day, Rascal’s shaggy body finds its way into the arms of one volunteer or another. He shall be remembered in centuries to come as The Cat Who Was Continually Cradled. I peek out over Bucca‘s window seat and gaze with awe at the angels who keep him hugged and held and whole. (Angels extend their arms through yours and mine, you know.)

And how about Clara, all kinds of kooky in her wild wild beauty? If Shiny screams “shelter cat,” Clara is entirely “pageant queen,” all Birman rays of caramel-and-grey glory. How such a cat becomes streetbound is unimaginable. How such a cat becomes beloved again in her old age, shepherded through medical strangeness and uncertainty, is impossible.

But we, kittens, are not without angels.

I’ll close with an image that keeps unfolding. Just after Thanksgiving, I was delighted (as I am a creature with a small brain, and prone to easy delight) to see a pair of illuminated electric angels topping the shrubs at my church. With their trumpets and their golden lights, they were heralds of the Goodness that conquers all.

The next time I found myself at church, there were more angels. And green lights.

More angels. Angels in the grass. Angels on the spire.

Mark my words: I don’t think they’re done yet.

5 thoughts on “Sky full of angels”