Not so long ago, June lived outside, near a school. One fateful day, June was hit by a car. The driver kept going, but one of the teachers in the school saw June and rescued her from the street. She took June to the principal’s office and asked for help. But, since the principal had never dealt with this sort of problem before, he did not know what to do. After a series of fortunate events, June came to Tabby’s Place.

Little June is the epitome of what Tabby’s Place is all about. Terrified, critically injured, and paralyzed for life, June would need a sanctuary like no other.

To make matters sadder, June was lactating, meaning she had kittens somewhere. People searched, but could not find the kittens. In the meantime, June was nurtured at Tabby’s Place. She would never walk again, but Tabby’s Place has taken in so many paralyzed kitties that the staff knew just what to do and how to care for June.

Over a series of weeks, June began to trust the staff. While she learned to love the tender human touches and pets, she came to love indoor life. June was soon spayed and, of course, brought up to date on all vaccinations.

Because June is paralyzed and needs to have her bladder expressed by hand three times a day, her chances of being adopted are slim. She is a high maintenance kitty who is not able to jump into your lap for pets or to run around and play. But, she does love her wand toys, and she’s able to pull herself around like a champion. She’ll even impress us by scaling a tall cat tower, all on the strength of her front legs. June is one extraordinary girl! 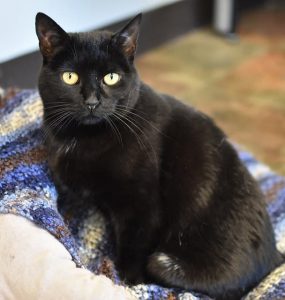 In addition to having her bladder expressed, June receives baths once a week, or more often as needed. She’s also a resident of our Community Room, where most of our staff members have their office space, and where June can receive the close monitoring she needs.

When you sponsor this little ball of fur, you’ll help June continue to get the best treatment possible.  June lost her ability to walk, and she lost her precious kittens as well.  Your generosity will help Tabby’s Place to make it all up to this beautiful kitty.