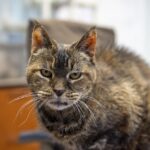 I think cats must pity us for focusing on all the wrong things.

For instance: we lament, in shame-soaked tones, that cheesecake is “bad,” and we, its eaters, are bad by association every time we succumb.

Instead, we could be marveling at the fact that cheesecake exists at all, and, as a bonus, is high in protein.

So (high in protein, that is) are the giant spiders imminently incoming to our vicinity. Cats pity the fools who obsess, instead, on the detail that they are named for a folkloric monster that shape-shifts just before killing you.

And so, too, is life itself. But we’re too busy bludgeoning our badness to be strengthened by its protein and poetry and prose.

Fortunately, we live among a species with no guile and no guilt (I am no longer speaking of the giant spiders). Although Jeannie can theoretically appreciate the importance of guilt, and did her sociology thesis on the distinction between guilt and shame, she is too busy throwing life on the grill to let it sear her conscience. 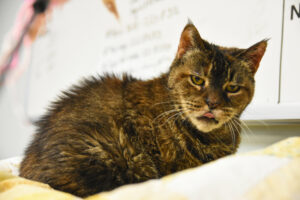 Jeannie, you may recall, is the quieter cinnamon counterpart to Frankie‘s blue-eyed soul. At least, we considered Jeannie “quieter” until her life let loose.

Where Frankie unfurled with guns blazing, telling everyone with ears that his favorite Sinatra song is “My Way” and his proper form of address is Chairman of the Charcuterie Board, Jeannie waited a little longer in the web and wool and warp and woof.

On tenterhooks, she surveyed the perimeter. With tender touch, she made friends with the humans. Ensconced in the tenderloin of Tabby’s Place — the Community Room is nothing if not Central Park West, or at least Central Park Weird — she took the time to take the measure of her new life.

Her conclusion: it was immeasurable.
The bounty: bottomless.
The metaphor: cheesecake.
The plan: consume. 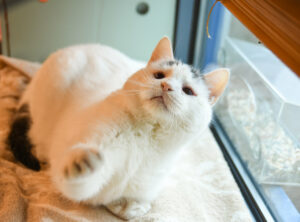 In a flash of sifted cinnamon, Jeannie leapt from languid to…lively. The cat once content with crumbs pulled out her fork and proclaimed all scrumptiousness on the premises “mine!”

The timid teenager became the imperious eight-year-old with her eyes firmly fixed on the blue-icing flower at the corner of the cake.

Like a sofa-sized spider, Jeannie jubilated, attempting to grasp the entire world with all of her limbs (and grumbling that she had far too few for the task at hand). She, no less than her sky-eyed brother, would be a magnate and a masterpiece. She would command the floor and the cake and the quaking admiration of every cat in her web. (Admiration would be ideal, but she would settle for doughy submission.)

She attempted to vanquish Verde. She domineered Dani. She annihilated etiquette, diced decorum, and knocked her own dainty reputation directly into the mixing bowl. 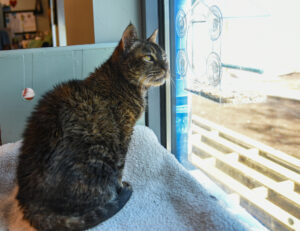 And then, on a kitchen timer all her own, she turned down the heat, took stock of her blessings, and cuddled up in the bread basket beside her harrowed neighbors. The earthquake was over; the fault lines vanished below layers of luscious; and Jeannie did not feel one fritter of fault at all.

She would taste it all. She would express her feelings. She would love and leap and lambaste and look forward to the next helping of dessert. Or destruction. It all depends upon the day.

She had a bad case of love for life.

And she somehow reminded us of all that’s good in the world.