Donate
Kitty LeFey’s Cosmos: Call Me Atlas, or Get a Better Map 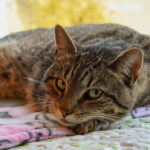 Sometimes the weight of the world feels so heavy that it’s impossible to shrug it off. Sometimes we feel responsible for getting everything done immediately and for taking care of everyone around us. Sometimes we feel overwhelmed by everything that is outside of our control. Those feelings are also hard to shrug off. There is no fun in feeling weighed down and overwrought, and all that weight is too much to carry alone.

Cats excel at carrying exactly only their precise weight. No more; no less.

Stunning, paraplegic Antin, a recent arrival in the Tabby’s Place community room, is as adept 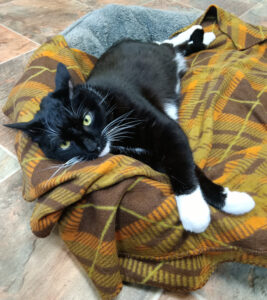 at carrying his own weight as anyone (He insists he is more adept than anyone, no matter what Dani has to say about it). Only two functional feet? No problem. No worries. Not a hard week – not even a second – to bear. Not even the indignity of being expressed, despite vocal complaints, is too much for this big boy.

Antin is as beautiful as he is sweet, or maybe he is as sweet as he is beautiful. Either way, he tops the charts on every level. He knows he is irresistibly shiny, sleek, soft, and adorable. Antin works his charms and pulls heartstrings. From the way he works his paws – kneading biscuits and showing off pink toe beans – it is obvious that Antin isn’t weighed down by concerns or cares. Antin knows no woes, just the completely bearable lightness of being a cat.

In her own way, Clementine, who is basically the physical negative of Antin (Look at the pictures! See what I mean?) only allows the world to rest lightly on her shoulders. Recently introduced to Suite B, which overflows with diverse personalities, positively gorgeous Clementine could feel the weightiness of 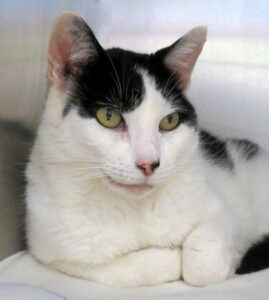 a name made famous by song and by my dad. Granted that, until now, nobody knew that my dad’s nickname was Clementine. But now, everybody knows. so, it should come as no surprise that I thought Clementine was a boy until I was enlightened. This sweet, shy girl, with four fully-functional feet, bears her own weight very lightly. Clementine also isn’t particularly weighed down with concern about gender or by badly sung versions of very good songs either.

Not that any of this bears any weight on anything at all, but that is precisely the point. Much of what feels heavy and hard to bear is no more real than the weight of a nickname or a slightly embarrassing moment. It is how we bear ourselves that counts, especially when we feel like we are having trouble carrying our own weight. 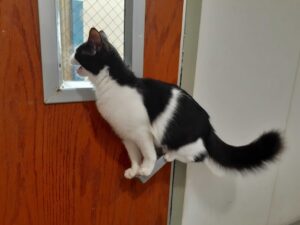 We know kittens are practically weightless. Some even seem to defy gravity. Once Quinn’s Corner doors open to more neonatal and FeLV+ kittens than ever before, we humans will have ample opportunities to learn more about carrying around less weight. Kittens are heavyweights when it comes to bearing up and bouncing back. A crash course in Wrestling 101 will steer us all in the right direction.

But, if your name is Atlas and you find yourself veering off course from the weight of the world on your shoulders, just find a different map. Seek a path that will lead you down a road that suits you better. As you ease on down that road, you might just find that you are light enough on your feet to start kicking up your heels.