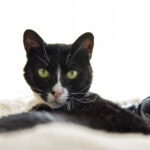 Nyla left us on November 9th, 69 years to the day after the poet Dylan Thomas.

He was 39; she was considerably older, in the scratchy arithmetic of cat years.

They both knew a thing or two about rage, and light, and reigning. And on November 10th, when our grief is gale-force, we need all the poetry we can get.

Every gash in the fabric of the Tabby’s Place quilt is terrible. Our tears tumble for new arrivals and icons alike. But some goodbyes slash us especially, nearly stealing our breath and bravery.

Brave as a poet, Nyla came to us in June 2021, from the same New York shelter as Pepperoni. But where he was spice and shouting, comedy and cacophony, Nyla was a lithe little lyric, as elusive as the right word for the right moment.

No cat is a caricature, but Nyla was especially skilled at skewering our summaries. She was friendly, but she was fire. She was anxious, but she was electric. She wanted our affection, but she wanted a room of her own. She was a virtuoso of yawns, but her eyes were always open. She was Nemo‘s favorite target, but she was nobody’s fool.

(When Nyla was mercifully moved from Nemo’s Suite B to the more suitable Suite C, I swear she looked back at Nemo, elegantly recited some foul language, and then quoted Dylan Thomas: “When one burns one’s bridges, what a very nice fire it makes.”)

Recite the right lines, and Nyla would grant your wishes, wiggly light leaping from her lamp until your grumpy day was a gale of laughter. Show her your best, worst secret poetry, and Nyla would nuzzle you to better art and a better day, as only honest critics can do.

We thought, at first, that Nyla was somewhere near “young.” Can you blame us? The cat who scaled the walls and scaled the summits of silliness couldn’t possibly be old. She frolicked and flew, rollicked and knew, knew, knew…

Knew what we needed.

Knew that the right words are found in the field beyond words.

Knew that nobody is normal, and everyone is poetry.

Surely such a genius-queen is as young as a lilac.

But Nyla was Novembering all along. The sonnets on her shelf were not first editions after all. 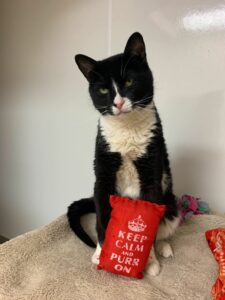 The first signs of Nyla’s years were her tummy troubles. You can’t keep a poet down, but neither could Nyla keep her food down, or her weight up. Next came the lump, an awkward lunk of language thrown into an otherwise perfect poem. Nyla had a knot of mammary cancer.

We believed we could untie it. We believed daylight was on our side. We believed that the radical, radiant cat could rage again, rage as she’d raged against Nemo and injustice and the thought of being anything but #1 on anyone’s List o’ Faves.

(Although we theoretically do not have faves, we do, in fact, have faves. Recently, our staff indulged in a Fantasy Adoption League, listing the seven cats we would bring home first. Nyla was #1/7 on multiple lists.)

But death, that old coward, came to smash its inkwell on the wall of November 9th. All at once, all the syntax slid off the page, letters puddling in panic as Nyla went into respiratory arrest. Denise and Karina and our tireless team toiled for hours, struggling to rewrite the language of Nyla’s failing body. Their extraordinary efforts were not enough; love’s last victory would be to loose our little one from her battle. 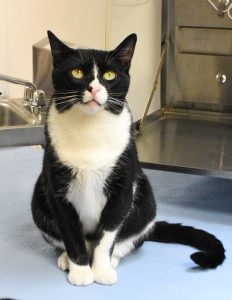 The staff always gathers when one of our own (and make no mistake: every cat is a member of the staff) is about to write her final lines. We weep; we hold onto each other; we recite the poetry of memory, the fond and the funny alike. It is always terrible and important.

As the poet-queen breathed her last, I leaned in to kiss her and then ran, ran, ran down the hall. The only poem I could remember was the infant-howl of “NO! NO! NO!”

Out of words and choked with tears, I staggered into Suite C, only to find it was the best and worst place I could be. It was like burying my face in Nyla’s blanket, or holding her favorite toy to my heart. We all know how an object instantly becomes precious when its owner dies, and in this case, all of Suite C was that object.

Everywhere I looked, it was a Poet’s Corner of memories: here, Nyla swarming like a squirrel for treats; there, Nyla reading my secrets in a long blink-and-forth; here, Nyla nestling into my neck, her stern eyes whispering “don’t you dare blog about this, or you’ll hear from my lawyer;” everywhere, Nyla living like a laureate, her thousand quirks telling the truth about this strange, sensational life we got to share.

I was conquered by the reminders.

I was called back to life.

I was commanded by Nyla, still Nyla, always Nyla, to skewer all simple summaries. 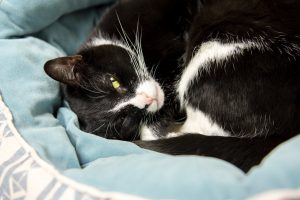 In the perplexed poetry of love, Nyla would hold us, forever.

In the sonnet that never ends, Nyla would sing over us.

If love is life’s victory, we win even here, even on November 10th, even when the leaves and our hearts are brittle and brown.

Until we meet again where all the lilacs live…burn bright, most peculiar, perfect poet. We adore you, Nyla.