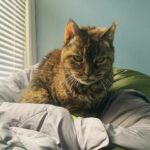 Editor’s note: You may know Jae as our Volunteer Coordinator and Sanctuary Associate.

There’s a chance you know Jae as Awesome Adopter of Oscar, Moonlight, and Tater.

But, because Jae is as humble as they are awesome, you probably do not know Jae as Fosterer of Limitless Love.

They have fostered legions of our fragile cats. They have walked into the Hall of Heartache with their eyes wide open and loved undaunted. And they have done this as a matter of course, as the most ordinary thing in the world.

But you and I know that hearts like Jae’s are anything but ordinary. Nobody knew this better than Jeannie, as you’re about to read… XO, AH 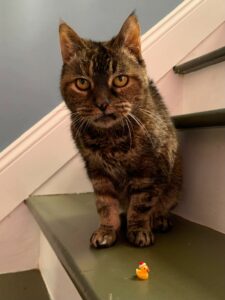 When I took Jeannie home, I promised to give her love for whatever time was left, whether it was two days or two weeks.

Jeannie, in her own style (of course), gave us over a month. Each extra day was a gift of grouchy-faced grins and demanding head bumps.

If her food bowl wasn’t full enough, or the door to the bathroom with her fountain was closed in the morning, I’d wake up to a grumpy-faced gal staring at me. She’d lead me to the cause of her disdain, disgust, or annoyance, but glaring very pointedly at me, then at the door, then at me, etc. until I moved myself to her whims.

Jeannie knew what she wanted and how to demand it. And I was but her humble and devoted servant.

Jeannie took no time in asserting herself as the reigning Queen of the Household. Upon first glance with my big boy Oscar, the two had a conversation via intense eye contact. The gist was, as far as I could understand, “You don’t bother me and I don’t bother you.” And so it was. 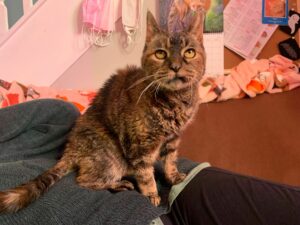 My rambunctious girl, Moonlight, however, was a bit more of challenge, especially since her eternal curiosity leads her to often stick her paws into trouble. Although she occasionally gave Jeannie a playful bap, Jeannie tolerated none of her shenanigans.

Tater, my shy girl, did nothing more than meekly stare at this tabby intruder, curious about her sudden presence in our home. Jeannie, in true Jeannie fashion, remained unbothered by any feline company as long as she could demand what she wanted from the humans.

Despite her medical condition, Jeannie was always one to give us a run for the money come time to medicate her. Even when you would attempt to quietly sneak up on her, she would always sense your intention. She would growl, throw up her paws, and attempt to squirm away at all costs. Jeannie knew what she liked and disliked. Medication and fluids were not high on her “to do list,” if it was up to her. 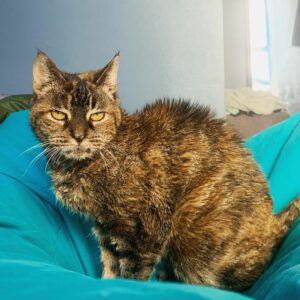 On her final day, however, it was clear that Jeannie was ready to leap from this life to the next. She hunkered down quietly in her favorite spot, barely giving an irritable meow when I gave her daily fluids. That night, we covered her in kisses and tears and tucked her in one last time. Come morning, she left us, surrounded by the Tabby’s Place staff who loved and adored her just as much as I did.

Jeannie’s stay with us was just short of a year, but her presence will be deeply missed. When I roll over in bed, I subconsciously find myself making sure there’s enough room for her. Even though she’s not there physically anymore, sometimes it feels as if her specter remains, settling into her grease-stained spot with tabby grumpiness.

Thank you, Jeannie, for leaving pink and brown toe bean prints on our hearts.