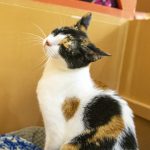 Ours is a world of worries.

The climate is changing. Human nature is not changing.

There’s a hot blob off the coast of New Zealand. Unsavory characters have been stealing enormous statuettes of Snoop Dogg.

It’s time to double down on our commitment to catliness.

I have spent over a dozen years attempting to distill the wisdom of cats into words. I have always and inevitably failed.

This is not for lack of trying.

Ever since childhood (my mother tells stories of my scribbling on yellow pads on the floor of Macy’s as a toddler), words have been my compass and my comforter and my chapel and my compulsion.

But words fall short when it comes to building a cathedral fit for feline liturgy.

So it comes as a relief when words come from afar to help with my joyously doomed task.

From the raw materials of me ne frego (“I don’t care”), this brilliant little sausage of a word means, “I don’t give a patoot-ism.” (Substitute “patoot” for your minor cuss word of choice. Or don’t. We should use “patoot” more liberally in general.)

In the animal kingdom, menefreghismo cats are the only kind that exist.

Menefreghismo is a way of life, a feline culture of unhurry and unworry.

Menefreghismo means Iris does not worry in advance whether Jared will be occupying her personal, inviolable, sacred solarium tube. She’ll get there when she gets there, and if he got there first, they’ll get together like a shuddering s’mores bar of shared shyness.

Menefreghismo means Ramekin doesn’t hold it against Elliot when the latter lunatic chooses him as his personal practice kit for innumerable not-yet-invented sports. (Actual note from our behavior log: “Elliot plays very rough. Ramekin doesn’t mind getting beat up. They’re a weird couple.”)

Menefreghismo means Bellamy doesn’t mind the fact that everyone knows he is The Lobby Urinator. What’s a little leakage between friends? Who isn’t Bellamy’s friend? (No, really, he wants to know so he can remedy this. There are some things even menefreghismo cats do mind.)

Menefreghismo means Elijah doesn’t mind being compared to the largest black-and-white cookie in the history of round objects.

Menefreghismo means Toulouse is not losing sleep over the possible future course of her dental disease.

Menefreghismo means Gator isn’t judging you for pretending you’re in Jurassic World every time you ride shotgun in your Dad’s Jeep.

Menefreghismo means Hector isn’t all messed up over Mousy‘s growing friendships with many feline others.

Menefreghismo means Boobalah isn’t moping over the misspelling of her name.

Menefreghismo means Nemo doesn’t resent not being invited to join Marcus and Zeppole in their new secret society The Syndicate Of Buoyant Gentlemen.

Menefreghismo means certain gentlemen don’t spend hours agonizing over why Nemo likes to thrash the buoyancy right out of them.

Menefreghismo won’t get us everywhere we need to go — there are, in fact, things that should enrage and outrage and enliven and bestir us (injustice, dodgeball, plant-based ice cream sandwiches).

But I’m convinced (it’s hard not to be swayed by 120 cats) that we could probably stand to mind a great deal less.

We’ll never quite be carefree, you and me. I’ll keep worrying over my precious little words; you’ll keep itching and agitating over the anxieties that are tattooed upon your own beautiful brain. But maybe we can choose to shrug and smile and sprint across our days with just a speckle less stress.

A certain hot blob named Elijah and his 119 best friends are rooting for us.

The mutually amazing society
Do it for the kitten
Guest post: Special persons
Guest post: on Felis Catus
Bellamy and other scary angels