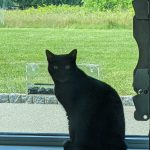 Perhaps I should let all six-year-olds and cats leave the room before I continue.

Or perhaps they should stay.

I’m sticking to this conviction even when the meanest kid in class gets the biggest piece of cake — you know, the corner piece, with the gigantic blue icing rose.

I’m sticking to this conviction even when a snarling, spraying mess of a cat gets cherished like a queen.

I’m sticking to this conviction even and especially when we get more and less than we deserve.

“Just desserts” are a sticky concept, and not only when blue icing roses are involved. It’s a swift tumble from the high horse of I Have Earned All My Goodies to I Am The Baddest Of All Beasts.

You know the fall of which I speak.

One day you’re on top of the world, taking every cake. You work hard; you love tenaciously; you pay your dues and your taxes and your hours at Planet Fitness. And when good things stream your way? You wrap pride around you like a velvet cape, clasping it with the gold star you know you deserve, and bellow “I HATH EARNED THIS!”

The very next day (or — let’s get real — hour) you snap at your mother and trip over your cat and bumble through brambles of complete uselessness and eat no fewer than two sleeves of Oreos on the couch. You shudder under a threadbare burlap bag and whimper, “I hath earned nothing.”

Both days? Your people and your animals and your kindred spirits keep on loving you.

The sky remains sturdily affixed above your head.

And you remember, for a passing instant, that everything is grace.

If there were a Superintendent at the Secret School of Gratuitous Mercy, it might be Marcia Rosenberg. Sometime between Stonehenge and the Civil War, Marcia arrived at Tabby’s Place, all kitten-perfect and infant-adorable. Her sweetness and her smallness and her infinite innocence easily earned her a forever home.

Except no sort of home — not to mention anything resembling “forever” — can ever be “earned.”

Time tumbled, and Marcia fumbled, and a combination of aggression and inappropriate elimination earned her a one-way ticket back to Tabby’s Place. Once a cat is larger than a Ding Dong, she can get away with far less, and so the bell tolled for Marcia’s misdeeds.

The hour was late. The behavior was less than gold star-worthy. Marcia’s manic aggression and too-ticklish terror (actual note from the behavior log: “Marcia gets triggered by the sound of pill bottles”) would send lesser creatures to permanent detention in the basement of shame.

But Tabby’s Place is stubbornly unfair.

Marcia’s baddest behavior (which, she would like the record to show, was explicitly solicited by none less than the venerable Outkast) has earned nothing but nurture.

Marcia’s rage has set the stage for relentless affection.

Marcia’s tantrums have been tenderly witnessed, her anger acknowledged, her cheering section undiminished.

Now, you will tell me, of course, that every cat deserves mercy. Every cat, however puckish or fractious or eager to fracture our faces, deserves to be cherished and championed and festooned with five hundred gold stars. Merit has no bearing here.

And I will tell you, of course, that you are right.

The “bad” and the “complicated” shall be given the simple syrup of our sweetness and the sturdy assurance of our love.

In fact, they may even get a few extra helpings of affection, patience, reassurance that the love they seek (even and especially when they would not admit to seeking it) is irrevocable.

This will not disturb a single one of them.

Cats are blessedly bereft of our species’ anxious inner abacus.

Marcia is not measuring the fish mush meted out to lesser cats. (Cats universally view cats as “lesser cats,” but it’s nothing personal.) Marcia is not shaking her sharp-clawed fist at Faye for getting a longer brushing session. She does not resent Ronnie for being pet for eight minutes longer even though she was eight times more adorable. She does not study the number of hours Rose works each week and compare their salaries accordingly. She does not begrudge the kittens the goopy gush of affection that reliably sloshes their way.

She knows — even in her angst and her roaring and her inscrutably irrevocable belovedness — that mercy means everyone’s cup will be filled.

If you start with a teaspoon, you’ll get a gallon. If your bucket is brimming, you may just need a top-off.

The last shall be first. The first shall be last. Everyone shall receive more than anyone can deserve.

And the incandescent unfairness of it all means that no one need worry. Our dismal days will never forfeit the golden heldness that we never earned to begin with.

Marcia, Marcia, Marcia. How you — with no concept of “just desserts,” no cool internal calculus, no worries that you can either earn nor lose love — teach us.

Even as you terrify us.

May we extend the same stubborn kindness to each other.