Donate
Glitter covereth over a multitude of sins 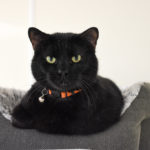 If you are a cat, these are not the place you want to be.

No, that’s not right. If you are a cat, these are exactly where you aspire to be.

Whether dutifully hand-written after witnessing an “incident,” hastily typed, or merely muttered while munching a half-lunch between catastrophes, “behavior logs” are, as you might suspect, Tabby’s Place’s answer to a crime blotter.

Much like an actual crime blotter, our behavior logs contain everything from frippery to felony:

“A resident reported disturbing noises at 11:53 pm. Police were dispatched to the scene and discovered an unattended radio streaming the song ‘No Diggity’ on repeat. No citations were given, and exactly zero diggity was detected.”

“A passing motorist contacted police at 9:30 am to report a sofa cushion in the southbound lane on the Newtown Bypass. Patrol checked the Bypass in both directions and did not locate a cushion.”*

“Siesta has chosen to sit directly above me and just stare and breathe loudly.”

“Spaghetti gently bit the back of my leg because I was not paying attention to him.”

“El Tigre is very attached to the tube in the suite and is now using it to grab and attack people’s legs.”

“Bianca reports that Indiana has determined that cats who are not Indiana should not be permitted to live. Bianca additionally reports that, being the living embodiment of ‘rumpus,’ she can personally handle this situation.”

“An unidentified urinator has repeatedly fouled the ramp in Suite B. Repeat: there is a urinator at large.”

“Stevie had some bad words to say to Angelo.”

“Steven would like the record to show that he and Stevie are two separate individuals. Steven does not want this going on his academic record.”

“Olive and Anka have reported that Bellamy enjoys galloping through the Lobby for no apparent reason, which causes them to disintegrate into rage. Bellamy gives precisely zero diggity.”

Let the criminal record show that every cat who makes it to the behavior logs is prouder than a platoon of rare pink peacocks.

Let the academic record show that every cat who fails to make it to the behavior logs has a secret fantasy life in which they utterly dominate the behavior logs. (I’m looking at you, Rose and Pearl and Steven-not-Stevie. You’re bound for the Ivy Leagues. You have the manners of queens. But we know someone put that couch cushion on the Bypass and then took it back. And we know that, sweet and tenderhearted though you are, you secretly like to pretend, after you push your shopping cart back into the cart return, that there’s a giant explosion going off behind you as you stride away calmly. Wait, no, that’s me.)

Although cats may enjoy their noteworthy naughtiness, I’d be lying if I said we always found it to be magical. The tomfoolery can try our souls, or at least our weary human bodies, and some days we wish they would all just be…good.

And then we remember — nay, we are forcibly reminded — they are good.

Or at least, they are — all — glittering.

Glimmering. Glowering at us with their unloseable glory.

And, under the glitter that is love, all the inanity and insanity somehow shuffles off. No citations will be given. No judgments will be leveled. No diggity will be detected.

So, in our own imperfections and infractions, may we take heart, and may we be generous with the glitter-coat. Love is a form of glitter, and glitter covers over a multitude of sins, from smudged toenail polish to social anxiety to bursting behavior logs.

Shine on, you criminal kittens.

*I swear I am not making this one up. No, really. This is taken verbatim from reality. I can neither confirm nor deny the spray-Putin situation, however.

Stoked!
Guest post: Rest easy
Do it for the kitten
Dear old fears
Bellamy and other scary angels

1 thought on “Glitter covereth over a multitude of sins”