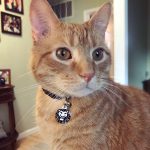 Simba has been home a full year!

It’s hard to believe, honestly. It seems to have flown by, and at the same time, so much has changed in that time. 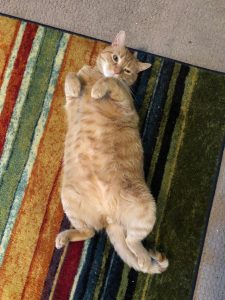 He’s so comfortable here now – he’s even taking to stealing my and my husband’s spots on the couch when we get up – and he’s so happy and sweet.  He’s made such amazing progress since coming home that when I tell stories about him at Tabby’s Place, people can hardly believe he’s the same surly cat who used to wear the Orange Collar of Unpredictability, reserved for the most ferocious Tabby’s Place residents.

And while he still has the occasional outburst, they are fewer and farther between all the time.  In fact, he’s actually learned to self-regulate.  I’ve seen him twitch as though he’s going to snap at something, stop himself, and then walk away instead.  When he’s overstimulated from petting, he simply gets up, walks just out of reach, and settles himself down.  It’s amazing to see!  And, while I’d love to say this is the result of expert training on my part, we haven’t done much but show him patience and carefully introduce boundaries.  He’s done most of the work himself.  He’s a very intelligent boy.  I think we were just lucky enough to find each other, and in our home he’s been able to bloom. 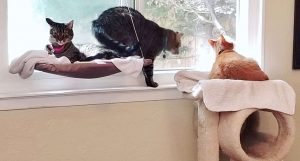 1) Peggy!  Simba continues to think Peggy is just the greatest friend ever.  The two are constantly chasing each other around the house or having play slap fights on the living room cat tower.  Peggy has taught him the joys of cardboard boxes, greeting food delivery persons, and studying bugs.  She’s taught him boundaries and manners, and shown him patience and forgiveness when he oversteps, and he absolutely adores her. 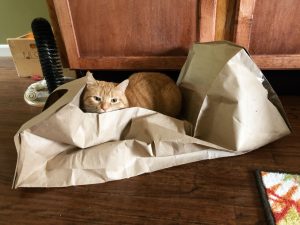 1a) Dottie gets an honorable mention here because while she remains skeptical of Simba, he still finds her fascinating and his efforts to befriend her continue in earnest.  Unfortunately Dottie is mercurial, and will play with him one minute and hiss and skitter off the next.  But he is undeterred and determined to solve the great mystery of Dottie.  We have caught all three cats watching birds out the windows next to each other a few times, so he’s definitely making progress.

2) His humans. Simba patiently waits for me to wake up every morning, then comes bounding to me as soon as he hears my voice.  He likes to follow my husband around and talk to him.  Sometimes he loudly scolds him, sometimes he simply makes conversation in meows and grunts.  What fascinates us is how differently Simba treats each of us – I usually get quiet, sweet meows accompanied by soft, gentle head rubs, while Dan gets loud, extended mrrroooowwwwsssss and the kind of head butts that would make a World Cup soccer champion flinch.  Either way, he loves us boisterously, and without restraint. 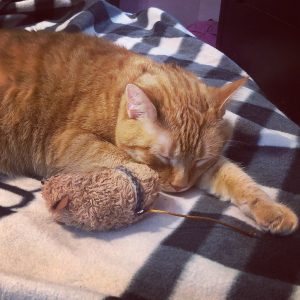 3) Licking the shower curtain.  I don’t know where he picked up this very weird habit.  But he enjoys it immensely.

4) His baby. God help us if his gnarly, drooled-on Chewbacca mouse ever falls apart.  He carries it around, holds it in his mouth while he marches in place joyfully on the bed, even placed it in Dottie’s favorite spot in what we assume was a peace offering.  It is his constant companion and favorite toy.  (It was also a limited edition item. So I mean it when I say God help us if it ever falls apart…)

5) Bedtime. Simba still goes into his own room overnight, and he loves it.  He lets me know when he’s ready for bed by rubbing on my legs compulsively, and then trots down the hallway toward his room, chatting to me all the way.  We bring his baby, he gets some bedtime treats, and he tucks himself in for the night.  It’s not an entirely necessary ritual anymore, but he seems to enjoy it, so we see no reason to change it. 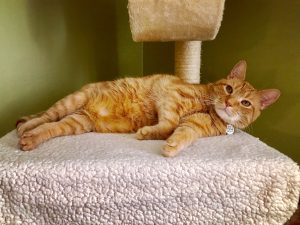 And then there’s that other thing…

I leave out a dish of dry food at night for the outdoor cats in the neighborhood.  Or at least, that’s who I thought I was leaving it for…until one warm night when we had the front door open and suddenly heard a loud crash that turned out to be a fully-puffed up Simba trying to tear his way through the screen of the storm door.

What had arisen his ire?

A young raccoon, nervously poking his head around the corner of the house.  When we closed the door, Simba ran to the front window and we all watched as our new friend (who we’ve since named Rocket) enjoyed the meal we’d left out.  (For the record, I have also seen the neighbor’s cats eating the food I leave out -– I guess it’s first come, first served.) 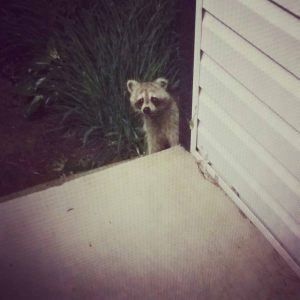 Rocket seems to have no fear of us, but he is not eager to tangle with Simba ever again.  Whenever he comes around, Simba sits guard in the front window, watching closely like a true Lion King defending his territory from an interloper.

Which I guess means he truly does feel at home.

When I look at how well things have worked out, I feel guilty that I didn’t bring Simba home sooner than I did.  But I think he forgives me.  These days, he’s a happy, affectionate, silly boy who’s enjoying every second of his new life.  And I’m grateful that we’ve had the chance to be a part of that.