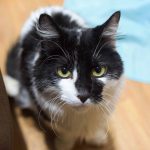 Tabby’s Place has hosted no fewer than six Oreos, five Kittys, and a full flotilla of Tigers.

So, in 2,900 cats and counting, it’s somewhat surprising that we’ve only had a single Rascal. 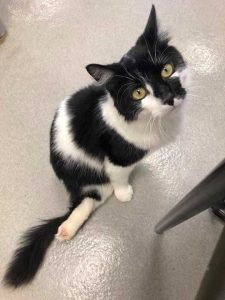 No one is shocked that we’ve had just one Juice Box, or a lone Vulpix. But, by now, shouldn’t we have had at least a smattering of Rascals? It’s a name common among cats and hamsters and wabbits; how have we gone sixteen years without one?

When you meet Rascal the First and Only, you’ll understand.
To put it mildly, he was worth the wait.

The first thing you will notice about Rascal is his infinite splendor. We’ll get back to that in a moment. 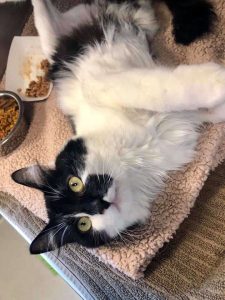 But the second thing you will notice about Rascal is his wonky leg. Some short-sighted individuals might describe Rascal’s left back leg as “deformed.” In his gentle way, Rascal would correct them: it is fully formed, albeit funkily so, but we’re talking “funky” like Sly and the Family Stone, not “funky” like “oh, that vegan cheese is funky.”

We can agree to compromise: Rascal’s left back leg is undeniably rascally.

It does not plonk down a foot and walk like a “normal” leg; it does not attempt to plonk down at all. Like a flag at full-time half-mast, Rascal’s leg simply stretches out mid-air, a black-and-white plank with no hinges. As Rascal rambles around — which he does with speed and gusto — his wonky, funky leg is just a stiff inconvenience to work around. 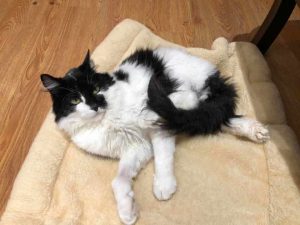 And besides, you won’t even notice Rascal’s rebellious leg until five minutes after you’ve met him. That’s because he’s drawing you into his infinite eyes, alluring you into the deep of a brand new best-friendship. If Rascal has his way — and this is a cat who gets his way — you’ll soon be holding him like a baby koala, preferably in a snuggly sling, and giving yourself and your hours to the task of hugging and kissing him.

Rascal moves at a different pace from other creatures. Whether he’s eating, drinking or investigating a crispy autumn leaf, he’s slow and deliberate, unable or just uninterested in hurrying. Rascal is a podcast so rich and nourishing, he’s been slowed down several times so you can savor and ponder every word. 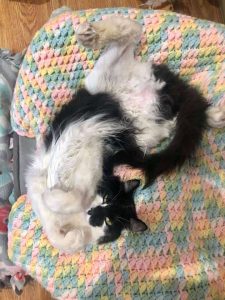 You might think a fella like Rascal would be a bottomless pit of need. And you’d be right; the world is his Olive Garden, and your love is the never-ending march of breadsticks. But much more than he demands love, Rascal demands to give it, to empty himself over and over into the arms of everyone in need of a hug. (He is not to be confused with Adam, who will empty himself into the arms of everyone in need of being peed upon.)

Unlike ordinary cats, Rascal will let you hold him all the live-long day, the closer the better, only occasionally shifting to snuggle closer or to inexplicably turn himself upside-down. 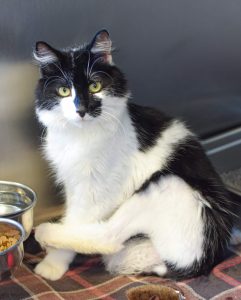 Ah, yes. About that upside-down business. Rascal, like fellow black-and-white bizarro-neighbor Walter, has some sort of neurological issue. Like Walter, Rascal circles. In his case, it’s a counter-clockwise swirl, walking some labyrinth of the mind that sometimes gets him stuck in corners. Much as we’d like to believe it’s a form of contemplative prayer, we’re worried that something is not quite right in Rascal’s brain.

A recent MRI turned up a whole lot of nothing, which is good but mystifying news. All we know is that his funky leg seems to have been funkified since birth; his other back leg has some strange curving, too; and he’s almost as strange as your average Tabby’s Place staff member. When Rascal arrived from another shelter, he brought no History Of Me book, so we can only go forward and treat his symptoms and his splendor as needed.

But let’s not kid ourselves. We all know who’s really being treated here. And you’re invited to the party, too. If you’re in the realm of Ringoes this weekend, do stop by to meet the treat and the treasure of the Lobby, the one true Rascal.

1 thought on “One true Rascal”