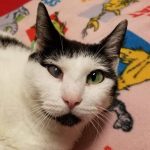 Since c. 2019, Tabby’s Place has had one cross-eyed “NON COMMUNAL NO NO NO TO COMMUNITY Cat.” 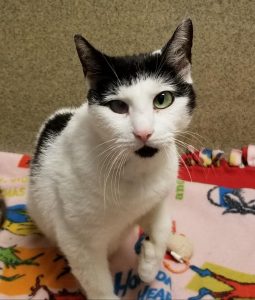 “Community Cats,” as Tabbishly defined, are those residents who live in non-suite sectors of Tabby’s Place (e.g. our offices, the Lobby, Community Room and Lounge). They are not necessarily lovers of their kindred, but they generally possess the spiritual gift called “allowing other cats to live.”

You might think of Community Cats as the feline equivalent of Community Fish. You may have seen the latter label on fish tanks at the pet store: cute little neon tetras and fancy-tailed guppies are Community Fish, meaning — you guessed it — they have been graced with the gift of “allowing other fish to live.”

Just a few tanks down from those goofy guppies, things get…well, gory, if you’re not careful. Some of the most beautiful, magical fish will be labeled Semi-Aggressive or Aggressive. (Once in awhile, some well-meaning fish store employee will substitute “Territorial” for “Aggressive.” That’s fine, as long as you know that “Territorial” refers to the way Genghis Khan sought territory.) 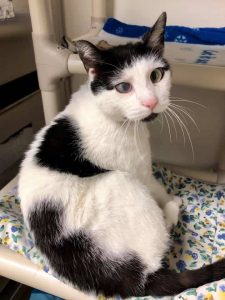 These are the knuckleheads of the sea, the toothy troublemakers who will eat little guys and/or each other. Gruesome example: I once knew a woman who had a tank full of Oscars, which was super fun until they started a Fight Club that left only one grizzled old jerk swimming.

But enough about fish.

Community Cats, generally speaking, get along. If they don’t, they’re demoted to suites and/or placed on behavioral medication and/or, in the spectacular case of Anka, given their own private fenced-in realm where they can be Emperor but they cannot murder anyone.

Happily, very few cats are truly Aggressive, in the capital-A sense. (Yes, Anka; we know that you are among the few and the proud. So very proud.) We work with these feline fighters gently, getting them onto the right dose of the right behavior medication, combined with frequent playtime and the all-important placement in the right suite. You wouldn’t place an Aggressive Archer with a Neighborly Norman any more than you’d stick an Oscar in a neon’s bowl.

But sometimes, the tanks are mis-labeled. 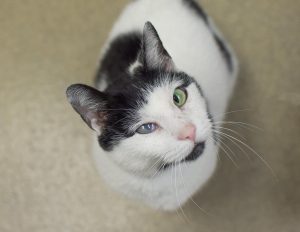 Ida gave us every indication that she was a Community Cat. Cross-eyed but never cross with us, the brave, aging mama raised three surviving kittens from an original litter of five, devoted and doting and boundless in her love. Little Marysia, Artur and Agata grew up strong and sweet and were all adopted; it was time for Ida to come into her own. We expected she’d spend mere days in a suite before getting adopted. Based on all we knew of Ida, we expected her to sprinkle stardust and sweetness on all her neighbors.

I took this foolishness to my own special level. Ida’s lovability made me swoon; Ida’s name made me stupid. I immediately imagined her as a sort of feline equivalent to the only other Ida I’ve known, a tiny Sicilian who lived upstairs from my grandparents, floated under a wondrous halo of white curls, and was forever clutching her rosary and bringing me cookies and kissing my face. Both Idas were older ladies; both Idas were lovable; both Idas were clearly, surely put on this earth to plant love and grow community. 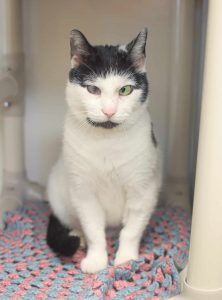 When I told Ida the Feline about all this, it almost uncrossed her eyes.

Ida clearly never spoke to Ida. In all her years of raising litter after litter of kittens outside, Ida the Feline never meditated on sweet communion with other souls. Recently Betty and Faye tried to tell Ida about the concept of “beloved community;” Ida gave them a beloved punch in the face.

Ida loved her kittens; Ida loves us; Ida clearly loves herself; Ida does not love cats.

Ida is a Semi-Aggressive Fish in a Community tank.

And so it is with great sighs that we have finally put Ida on behavioral meds.

As with any medicated cat, this is no sign of failure on Ida’s part. (Knowing Ida, it’s more a badge of glory.) We don’t anticipate she’ll need this medication once she’s in a home of her own, no longer surrounded by 15 goobers with their own histories and hangups. In the life before Tabby’s Place, there was no time for tenderness; when you’ve gotta be Joan of Arc for your helpless kittens, there’s no time to coo Joni Mitchell songs for mellow friends. 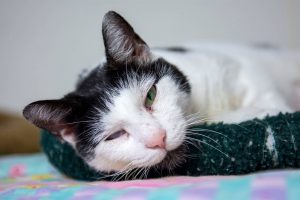 Ida is aggressive. Ida is understandable. And Ida is fully, phenomenally awesome.

Adoption is inevitable. Ida is irresistible. And if she’s gotta cross a few lines on her cross-eyed walk home, we’ll do our best to steer her sass so nobody gets eaten. We — the foolish humans — are Ida’s beloved community, and we’ll shepherd all her sass and savagery, come what may.