Donate
The wonder of Alice 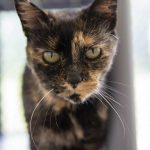 But this ain’t no Wonderland. 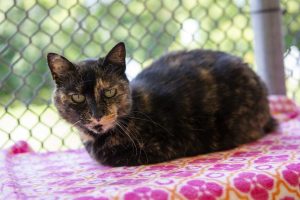 Just ask Alice. She’s been searching in vain for a hookah-smoking caterpillar since the day she arrived, and there are no tardy white rabbits or tea-swilling hares in sight. Worst of all, the place is shamefully devoid of cakes that will make one grow ten times in size.

Alice would like very much to grow ten times in size.
She will, however, settle for cakes that don’t do anything but taste like bologna.

In fact, Alice has graciously accepted that she just might have to settle for Tabby’s Place exactly as it is, a land of wonders if something short of Wonderland. Alice is a master of gracious living. 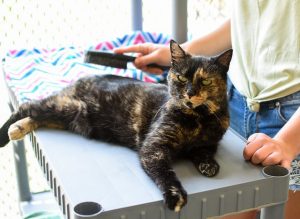 This was not always how Alice was described. In another lifetime, at a public shelter, Alice was known not so much for gracious living as for “intermittent diarrhea.”

That’s hardly the reputation an elegant lady desires. With her many quirks and qualities and subtle streaks of October-orange, Alice was a wondercat of infinite interest. And you mean to tell me that her defining characteristic was “intermittent diarrhea?”

It’s enough to make a girl step straight through a looking-glass into a peculiar new world. 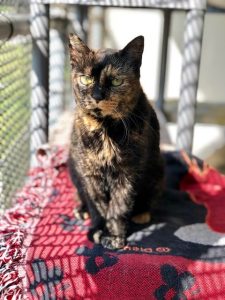 In that regard, our Alice is just like Wonderland’s famous visitor. Whatever her life was like before, it became far weirder the day she tumbled into Ringoes, NJ. Fortunately for us, her arrival also made Ringoes a good deal weirder. (We deal exclusively in weird here.)

Light on her feet and bright in her big, ponderous eyes, Alice is a wisp of a tortoiseshell stitched together entirely with loveliness. It’s as though someone took a wee black cat and embroidered her with orange thread, all soft and dreamlike and silently pleading to be petted. It’s probably for the best that Alice hasn’t found those EAT ME cakes, since mere humans might not be able to handle this level of loveliness ten times larger.

But like that other Alice, our elegant lady is no lightweight. Dainty and refined though she may be, Alice can hold her own teacup and hold her own, period, among the madmen and self-made queens of hearts in Suite A. If Adam is one top hat shy of being a certain Mad Hatter, bunny-eared Boom is his March Hare, and one must always be on guard for a certain ink-blotchy Cheshire Rorschach vanishing into a grin. (And let’s not even talk about the Walrus and the Carpenter, Angelo and Steven searching for oysters among the kibbles.) 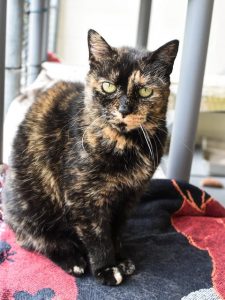 Ethereal Alice wafts around them all, taking notes and dreaming dreams and keeping her eyes on the biggest prize, which is your personal affection.

That’s the true dream on the other side of the looking glass, kittens: your ever-lovin’ love.

Alice would gladly dump every drop of tea into Boston Harbor for one cup of your affection. Despite being sold short; despite being denied bologna (Suite A is on a prescription diet, dies irae); despite never finding that wondrous caterpillar; Alice is radiant with joy, and expectation, and the hope that you will pause your frippery to pet her.

Speaking of human frippery and foolery, we’re disappointed in our species for overlooking Alice. She may have Manx Syndrome (and its associated “intermittent diarrhea”); she may be as elderly as she is elegant; she may need her bladder expressed (Manx Syndrome is a wonderland of fun)…but she is altogether Alice, magnificent in her muchness.

And so she doesn’t worry.

Alice may or may not find her forever home — or, more accurately, she may have already found it at Tabby’s Place. We’re as clueless as Tweedle Dee and Tweedle Dum on such matters. Less “adoptable” cats have been scooped up swiftly; others have spent their full saga under our roof. Things are always getting curiouser and curiouser.

We’re all mad here, but we’re also madly in love with one Alice. So join us, kittens, and let’s believe some impossible things together.

1 thought on “The wonder of Alice”