Donate
Get with the program, part II

Tabby's Place > Blog > Get with the program, part II
By Angela Hartley
No Comments
Uncategorized 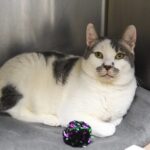 Hips’ American adventure began with a bit of repair. Like any hot rod worthy of its flames, the injured cat needed a bit of detailing.

But the cat who didn’t flinch at the fear of flight or margarine or hugs from strangers wasn’t about to stress a minor amputation.

This would all be in the interest of aerodynamics and overall awesomeness. After all, his injured tail was as troublesome as a one-size-fits-all skort, as tedious as the need to repeatedly reassure your computer, “I am not a robot.”

Being fully alive and fully himself, with or without a tail, Hips had no problem with this.

In fact, Hips had no problems. Which must have been a most perplexing problem for anyone supervising the program. 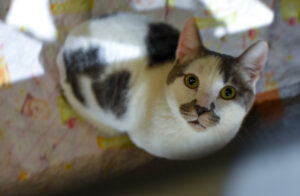 According to the program, an incontinent cat deprived of his country and his tail and his ability to proudly state “I have never been a citizen of New Jersey” should take some time to take a shine to his new land and his new body and his newfound ability to sing “Born to Run” like a native son.

According to the program, a brand-new Tabby’s Place Lobby resident should brand himself a bit bashful, studiously modest, and exquisitely cautious around upperclassmen, especially those known to be hungry, hungry hippos for the immortal souls of other beings.

According to the program, a cat with such a past should pull out pastels, not neons, while painting his future. And, while he’s at it, best he keep all such paintings under the bed.

Fortunately, Hips hasn’t even heard of the program. 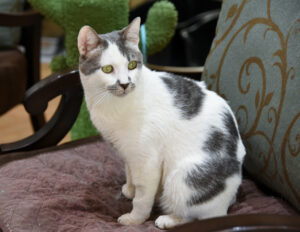 Second, behold your own glory. And you, child, are a glorious splendorbeast if ever there was one. The pegasuses themselves lean in to look upon you. Who needs a tail when you have eyes that see and ears that hear and legs that will trebuchet you onto the tops of turrets and castles, which is to say desks where there are humans to slather with some more love?

Third, learn all lyrics to “Born to Run.” Write fan mail to The Boss. Explain that you, too, are a boss, but this role has room for infinite persons.

Fourth, befriend the boss. The other one. The one so incandescently insane, he is the first cat to have his own enormous bachelor pad/minimum-security prison in the heart of the Lobby, so as to prevent his actual annihilation of all felinity.

Admire him. Adore him. Exuberantly greet him as Your Eminence. And then, in a move triggering Defcon 1 and Severe Thunderstorm Warnings and press conferences by the heads of Finland and Legoland and Chipotle, vault your precious, loose-hipped body directly into the ninth circle of hell.

Yes: Hips (as you may have heard) hurled himself, his precious, pure-hearted self, directly into Anka’s pen.

Anka’s pen, from which cats do not return.

Anka’s pen, the equivalent of Mordor and Azkaban and the Senate.

Hips proceeded to pick up the pen and rewrite the program, in his own swirly script, where every “i” is dotted with a heart and every word ends! with! an! exclamation! point!

Anka did not see this coming. Neither did we, else we would have prevented it to save the innocent.

But it’s a very fine thing that Hips hobbled our program, or else we would have missed the miracle.

Adorably, astoundingly, amicably OK. Happiness grew, right along with Anka’s curmudgeonly heart. All the saints and angels leaned in and held their breath, and for a moment, it felt as though Republicans and Democrats and purveyors of plant-based cheddar and reasonable persons might all be able to share some popcorn, eating out of origami containers crafted out of crumpled-up programs.

As of this writing, he’s in the hilarious daily business of punching through programs, loving life more than an imperfect creature has any business doing. He aims to teach us, to take us with him, to wrest us from our robotics and shake our hips until we’re free. We don’t need tails; we don’t need well-trod tales; we don’t need permission or prudence or half as much preparation as we think we do to simply exult in the secrets of fur and flight.

But then, maybe we already understand this a little bit at Tabby’s Place.

There have been well-meaning people all along our parade route over the years, wondering if perhaps we should get with the program. Maybe we’d do better to ease up on the Special Needs cats. Maybe we could do more good for more creatures if we didn’t get so wrapped up in the weird and the wobbly, the exhausting and the expensive. Maybe we could help more of these if we weren’t so obsessed with the least of these. I mean, get with the program, Tabby’s Place.

And maybe there’s a place for the program, but it isn’t this place. 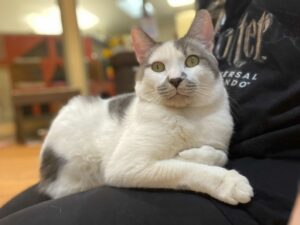 The program will always offer itself, its slim straight hips winning every marching band contest. You can fall in, if you choose. Plodding from A to B to C in prescribed order, you will be safe, or at least in good company, or at least in abundant company.

But if you hobble along with Hips and walk down the hall of Tabby’s Place, we’ll find that the order of suites goes B, C, A, with an open-faced Suite FIV/Special Needs sandwich in the middle, where the mustard belongs.

And the freest of beings always want to be where the mustard and the music and the mystery belong.

So choose your own adventure, kittens. But a certain swingy-hipped holy-man is hoping you’ll remember that you’re radiance itself, not a robot. Love is an organism, not an organizational chart. And far beyond the last pages of the program, you’ll find a pegasus with enough panache to share.

Reluctant but requisite postscript: Aforementioned feats of friendship were as short-lived as a Choco Taco in a volcano. Anka and Hips have not, in fact, become bosom buddies, kindred spirits, and/or anam caras. They are not singing John Legend songs into each another’s adoring ears. Anka’s pen is, in fact, still Mordor. Hips has learned to haul his happiness elsewhere. But that’s the thing, isn’t it? So long as one has happiness — and not even Sauron can steal that from you — one can haul it all around this tired, over-programmed world. And, perhaps, heal one’s corner of the world. So Hips’s mission of mirth continues…safely beyond the confines of Anka’s empire.