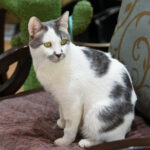 April 2022 brought a lot of things. In New Jersey, it brought a lot more of March than befits any self-respecting April. As for the showers that were supposed to come to ensure future flowers, well, most of those held off until May. As such, April was something of a washout. But, not in all the ways.

First of all, the flowers ultimately did bloom. In fact, the hyacinths made a spectacular showing, scenting walkways and doorways and pathways with their fragrant offerings. Gardens galore gloriated in the aftermath of April, despite April itself.

Second of all, and of far greater importance, April 2022 brought Hips to the lobby, and not just to any lobby: THE lobby. Of course, that is the lobby at Tabby’s Place.

Hips, of course, is a cat (All of the cats, in chorus, have instructed me to stop stating the obvious. “Obvious” is so not cool. Saying “so not cool” is also not cool, leaving said cats miffed by my very obvious lack of cool.).

Hips is very cool, truth be told, and an unusual cat even among the unusual cats that fill the ranks at Tabby’s Place. For one thing, Hips has no tail. He had a tail. He was born with it. That tail served Hips about as well as a cape in The Incredibles served the less fortunate so-called superheroes. For the amazing humans involved, it was a necessary decision to remove Hips’ tail. Hips is excessively unbothered by the result of the surgery.

To watch him, it seems like Hips’ tail was barely ever a part of him. His detachment from his tail is astonishingly complete, and that is not just because of the medical necessity that required it to be removed (following a car accident).

For, being one of a species that generally relies on their tails for both balance and showing off, Hips may as well have been born without one. Despite losing his tail, Hips has not lost one iota of confidence, not a stitch of balance, not a whisper of bravery (or is it bravado?), nor one whit of desire for derring-do. Hips has chutzpah.

Unfazed by any barrier, undeterred by any other cat’s demeanor, undaunted by those of larger size or louder clamor, Hips has decided that every square inch of the Tabby’s Place lobby is his to conquer and command. So, Hips explores as he pleases.

In his travels, the intrepid adventurer has discovered at least one barrier that has proven to be even less effective than Hadrian’s Wall. This particular barrier – a modest gate across a doorway – fails to keep Hips where those who plan these things have decided he belongs.

According to the staid captain of the ship, noted Executive Director and leader of all within the walls of Tabby’s Place, Hips has not only explored every inch of the lobby, he has examined every nook and cranny of the Executive Suite, naturally in high style and fine detail. No tail necessary to help Hips launch over the divider that keeps all of the other residents on their respective sides of that office door.

There’s a phrase that could be used to further describe Hips’ disregard for barriers, but it is untrue literally, and it is impolite figuratively.

All that said, Hips has better moves than all the dancers in all the Uptown Funk video compilations combined. He crosses divides, leaps expanses, ascends great heights, and pretty much gets wherever he is willing to get himself to, which is pretty much anywhere and everywhere.

Had he the fluency in English, Hips would explain that it is no big deal that he gets to where he gets to. He would tell you not to let the stitches where his tail used to be bother you. They certainly are no bother to him.

This dapper boy is truly self-possessed in all the good ways, and he neither requires nor desires a second of pity from anyone for any reason. He is too busy investigating and playing and greeting and meeting and simply living his life to the fullest every single day. That’s no tall tale, either. Don’t believe me? Just watch and see what happens.

For now, here is a gratuitous Shakira video because, whatever else is also true, Hips don’t lie.