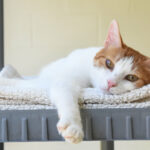 Every several years, many among us do it.

Mostly because we have to.

Mostly because of planned obsolescence.

We need to upgrade our devices.

In the case of cell phones (or very annoying paperweights that one concedes are more convenient than carrying around separate calendars, calculators, cameras, notepads, and crochet patterns), planned obsolescence comes in the form of operating system (OS) and memory limits. Even when you can update an OS, eventually, so much memory is gobbled up, the phone becomes a dead weight and needs to be replaced.

The hard, sad truth is that, in this culture of the disposable, some value very little outside of their stuff and themselves. The harder truth is that this includes other humans, as well as the creatures who rely on us to provide healthy environments that allow them to thrive.

But thanks to you, things are quite different at Tabby’s Place.

Among the aims, goals, and design of our happy haven is to be the safety net — that place where those least fortunate can land, as cats do, on their feet.

But, sometimes, landing in the 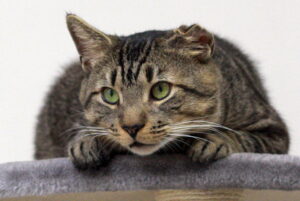 right environment is only the first step. Sometimes, there are wrinkles that need to be ironed out. Happily, Tabby’s Place has its ways of applying just the right amount of gentle pressure with the least possible heat to smooth the way.

“But, lo! What are these wrinkles?,” you may ask. Well, typically, the cats themselves are the wrinkliest wrinkles of them all (just ask Crinkle Bob, but don’t get caught up in technicalities).

Because of their spectacular wrinkulocity, every so often it becomes necessary to separate cats who are in a general disagreement about who is allowed to occupy which space. You’ve heard of Kozmo churning things up in Suite A. You know all about Frankie and his insistence on having things his way. You know Zelda and Honey have exceedingly strong differences of opinion as regards themselves and each other…and each other’s right to breathe.

Sometimes, in situations such as these, the cats’ tempers flare. Sometimes the cats require a reset. Often a reset is achieved simply by holding up a blanket between the wrinkly cats and coaxing them in opposite directions. Once in a while, a relocation is key to making residents calmer and happier. 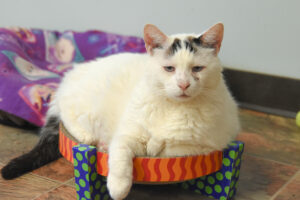 Relocations can be permanent suite changes, or they can be periodic visits to timeshare (very upscale version of a kitty condo) for a little privacy and decompression. In more extreme cases, medication might be necessary, and sometimes it takes a while for those in the know to figure out the minimum effective dose and to continue adjusting over time.

In all of these cases an effective reset allows each cat to thrive – eventually…ideally…we really, really hope. It is the primary goal, after all. Sometimes it takes a minute. Sometimes it takes a little bit longer than a minute. Patience is key. The rewards will follow. The affected suite gets a bit of a boost, one may say an upgrade, to something closer to idyllic.

Remember the last time you upgraded your cell phone (or laptop or tablet or kitchen mixer or television or…wow, we upgrade and update a lot of stuff!)? Amidst the frustration of the different configuration (why is that button THERE? Google keyboard, I’m talking to you.), there is always an opportunity for the change to bring unexpected pleasure and improvements – ideally; we really hope.

Meanwhile, it can be fun to play around with new settings. It’s cacophonously joyous to find new 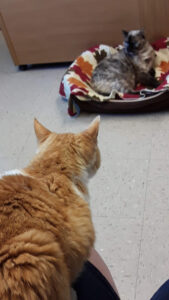 ringtones and revisit the contact list to pare it down and shore it up. In some cases, the old device can be salvaged and turned into a simpler tool or new toy (Freecell for everyone!). Eventually, the new device will become the old device, the one that’s comfortable, familiar, and set up just right. Until then, there is hope that comes from all kinds of resets – the hope that the new device or situation will be better.

At Tabby’s place, as Kozmo calms down, the whole of Suite A rejoices. With Ralph’s and S’mores’ relocation to the Community Room and Frankie’s relocation to the Lobby, S’mores is coming more and more out of his shell. Frankie is still figuring it out, but he has help from an attentive staff and lots of volunteers, and outdoor walks on a leash.

And, although, to date, nobody has brokered a lasting peace between Honey and Zelda, even the Executive cats have managed to allow each other to continue to exist through tiny, tepid truces. It’s a small, highly important detail. Even these tough, old, lovable girls have managed to thrive despite potentially disruptive changes.

These kinds of changes happen frequently for the cats and for us. The technological changes, as with the metaphysical ones, come in all shapes and sizes. The key is to take the intrusions, the inconveniences, and the inevitable irritations in stride.

Find what is good.
Find what works best.
Find ways to be flexible.