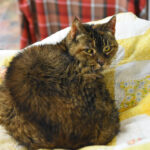 Jeannie, being pure cat, is a stranger to guilt in all its guises.

We, being pure perplexity, can take guilt too far.

Guilt is graceful when it scooches us towards patience and tenderness and restraint re: “murdering one’s roommates.”

If you, like Jeannie, are in a habit of chasing your neighbors out of the toilet whilst they are toileting, and/or wrapping them in your arms like a spider whilst bunny-kicking the cheesecake straight out of them, there may be a healthy role for guilt here.

But guilt can gunk up the works, if we glop it on too thick.

We are trying to build a community of love, and there is cake and kindness enough for everyone. The secret ingredient in the Tabby’s Place cheesecake is neither protein nor bacon, but a mysterious math: every time we give a slice away, the entire confection doubles in size. There is unlimited cake, if only we share it recklessly.

Jeannie knows what we forget: badness is as badness does, and the gooey goodness that sticks our hearts together through thick and thin has nothing to do with cake. 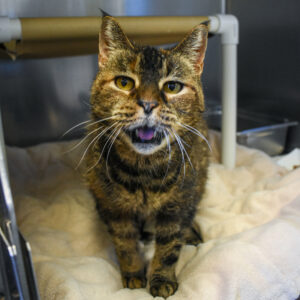 Perhaps this is why cats have a particular loathing for the concept of a “cheat day.” You’ve likely heard the term: someone on a restrictive, punishing diet may, from time to time, permit herself a day of indulgence, a slice of cheesecake or a half-truffle. If they are Dwayne “The Rock” Johnson, this apparently takes the form of 12 pancakes, 4 pizzas, and 21 brownies.

But as much as cats admire Dwayne “The Rock” Johnson for a multitude of reasons, they can’t square the box into which we try to squish our bliss.

Confess to Jeannie that you’re agonizing over the fried artichoke you ate last night, and the kindest thing she can say is, “huh?” Flagellate yourself for your dalliance with Devil Dogs, and Jeannie will rip the whip right out of your hand and urge you to access the Emergency Cool-Whip Reserve. Conflate your worth with your waistline, and Jeannie will jolt you with kind cinnamon eyes of compassion.

She wants you to have the slice. Make it two. She wills you to linger over the garden when you have work to do. She beseeches you to do a cartwheel or three, even if badly, even if you will muddy your good pants. She grieves when you galosh yourself through rivers of guilt for taking plump pleasure in the life you’ve been given. 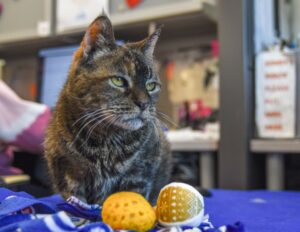 So, sometimes your joie de vivre will scorch the sky like Vesuvius. Sometimes your love of the luscious will tip the scales in the wrong direction. Your heart is the heart of the matter, and it needs the protein of delight. Save your guilt for the failures of love, not the excesses of exuberance.

Save a slice of cheesecake for precisely the person who annoys you more than a giant spider.

Savor the day and the hour and the basket of daily bread that is meant to nourish you, not banish you from your own good graces.

And save a place in your heart for the bawdy and the “bad,” the lovers of life whose lava can’t be contained in a single cake. They may need time-outs and behavior meds and stern talking-tos, but we need their courage and compassion for our own hungry hearts.

There are enough layers in this cake for all of us. And that’s why Jeannie’s favorite Sinatra song will always be All the Way.