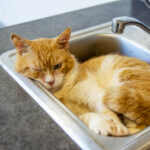 There is a voice under the ribs that never lies.

It sings all day long.

If you are a cat, this truth-teller chants ancient ballads about integrity, the overlapping circles of all souls, and McRib sandwiches. 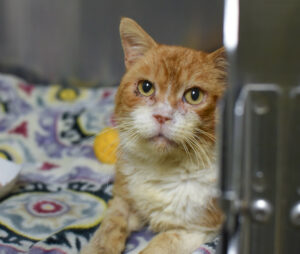 If you are a human, the voice tells you, among other things (e.g. don’t forget the sunscreen; do forget your grievances; canned pickle juice is perhaps not in your best interest), that you are neither completely in control nor capable of doing all things.

If you were a cat, this would bother you considerably less.

If you were Magellan, this would not bother you at all.

Although his threads are as orange as the dawn, Magellan knows he’s not the full sun.

Although the threads of his tale could be tapestried into a novel that would make Tolstoy cry, Magellan knows he is not the full story.

Although he’s as bright as the Fourth of July, Magellan knows his place in the family of fireworks. 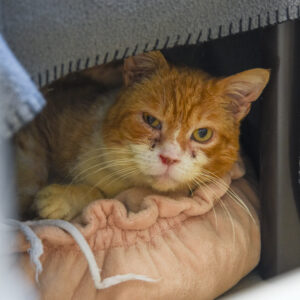 Although he shares his name with an explorer, Magellan’s ship sails far from the storms that shout smaller sailors into steerage.

Although he is FIV+ and FeLV+ and positively pockmarked by a life in the brambles, Magellan is perfectly at peace with his past, present, and future.

Magellan has heard the voice within, and it has whispered: “you, golden voyager, are exquisitely enough.”

You or I or Ferdinand “Freaky Ferdie” Magellan might have struggled to hear the voice above the sea monsters. But Magellan the cat rode the breakers, and the brokenheartedness, and the bad, baffling times wandering the grounds of a local motel until Leviathan itself spit him out on softer shores.

“Softer shores:” I am speaking, of course, of that blinkered, cockeyed, love-lashed lighthouse known as Tabby’s Place.

Even if you have not been tempest-tossed, starving under starless nights and rocked like a rowboat by two retroviruses, Arriving At Tabby’s Place would be enough to dump you out of your dinghy. We are a haven of hope; we are an oasis of compassion; we are a gathering point for saints and angels and weird merciful people whose hearts are larger than the Pacific. 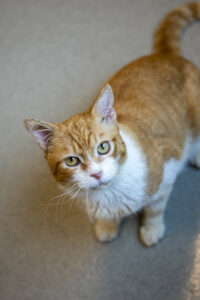 But when you get here, we are still New To You, a deep sea of faces and spaces and giant iridescent squids, by which I mean staff. Magellan’s previous digs may not have been Atlantis, but at least he knew he was King Triton.

Here, though, a navy of urchins awaited: peculiar persons and questionable cats and a great glassy sea of uncertainty.

We don’t adore uncertainty, you and me and Ferdie. The second it surfaces, we hear air horns and sea sirens and menacing mermaids who seek to drown us.

But uncertainty is unworrisome when your belly-voice bellows above the fear. Uncertainty is no more than a dolphin: playful, impish, ebullient, as it nudges you with its bottle nose.

This is the case even if your own nose is experiencing Bloody Snot Rockets, which is not, in this case, a value package from The Fireworks Superstore, but rather the unfortunate effect of a yacht-sized upper respiratory infection. Snot rockets begot nebulization, which means finding port in a carrier whilst humanoid urchins blast a fine mist of schnoz-saving warm air into your sinuses. 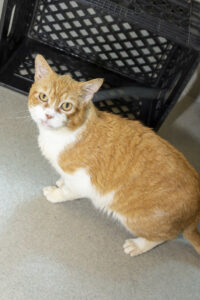 Lesser beasts would pace the plank of panic: “what has become of me? Am I still King Triton? How am I expected to remain victorious over these circumstances?”

But Magellan is greater than any voyager who ever looked through a scope and shouted, “Land ho!”

Because Magellan has always kept sight of the shore.

And you’re never really underwater when your eyes are on the beacon.

Magellan made peace with his Magellegance, limited but luminous, long before his ship ever passed the Statue of Tabberty. He was an old cat, a gold cat, a cat trawling a freighter of feline diseases, a cat fully aware that he was fully worthy of love and respect.

And several Nobel Prizes just for fun, especially if they were made of pastrami. 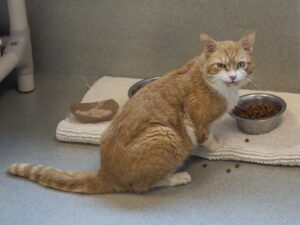 Daily, the voice in Magellan’s deep middle tells him deep truths: You are majestic. You are Magellan. You are here for the party, and the party — a party boat, nay the full party island, which may or not be Sicily — is here for you. You are ferocious and loving, a lap cat with a Loch Ness Monster streak.

You are the hammer of the dispossessed (no one defends the downtrodden like Magellan). You are the one who can overturn the money-changers’ tables (no one does righteous, unrighteous, and/or simply enjoyable indignation like Magellan, who would also like to note that Simply Enjoyable Indignation is his favorite band).

You are not every cat. 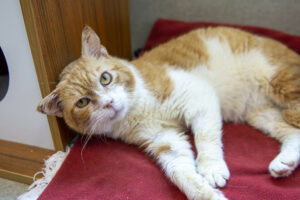 You are not the cat for the person who wants a languid cat, an uncomplicated cat, a cat who is younger than springtime or simpler than salt.

You are not even really King Triton, but dude had a serious daughter problem, so that’s all for the best.

The language of eternity sings loudest through earthy sailors who don’t have to be everything to be worth their salt.

You are everything your belly-voice whispers and sings.

And you and me and Freaky Ferdie? We are, too. 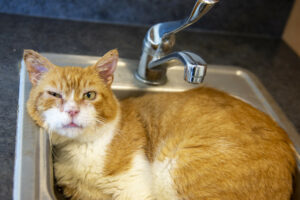 Our belly-voices have their own accents, of course. Neither Magellan nor Mr. Rogers nor your minister nor your Mom nor even your favorite cat can sing the melody that you need to hear from yourself.

And holler, “land ho! The kingdom of kindness is within you.”

Like Magellan, you are not every cat. You are a real, live cat, which is far better. You cannot will the world to rights by watching the news. You cannot control the times and tides. 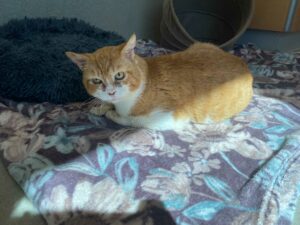 But you can dig a garden or crochet a potholder or adopt an FeLV+ cat or call your least-sufferable relative. You are insufferable, too, you know. And incandescent. And inextricable from the song of the whales and the quasars, the wild roaring symphony that only makes sense when we each contribute our singular chanteys and suffer each other gladly.

We are fools and voyagers, all.

We forget that we are and aren’t independent.

But the belly sings the anthem: we’re as full as the moon when we let ourselves be interdependent. What I’m not, you are; where my tide is low, yours can raise the wave; when my sparkler goes out, yours and Magellan’s can rekindle the fire.

And the great smiling sea is big enough to hold our whole symphony.

With a little help, part I
Epilogues: January 2022
You’ve Got Male