Donate
With a little help, part I 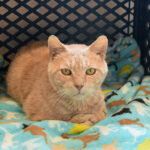 Tearful prologue: Shortly after this post was written, our jelly-belly boy Magellan made his final voyage. We miss him more than words can say, and take courage in knowing that friendship crosses even the furthest sea. Rest assured we are wrapping Ponce in comfort as he mourns beside us. Until we meet again, magical Magellan… — A.H.

If you start typing “I get by with a little help from” into your search bar, one of the top suggestions will be “my iPhone.”

Every cat alive knows that this is not the proper way to finish this sentence. 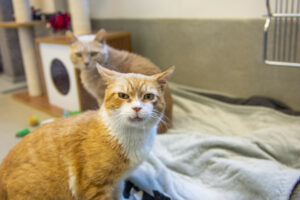 So, of course, does Joe Cocker, whose performance of “With a Little Help from My Friends” was one of the weirdest, sweetest, sweatiest moments at Woodstock.

Watching footage of this as a small child, I mistook his spastic passion for some sort of physical ailment, and concluded that he must need the help of his friends to function properly in the world.

He did need such help, and I do, and so do you and Magellan and Ponce de Leon and even Frankie. But we forget, and we need the music makers — spasmic and cosmic and chaotic — to remind us. 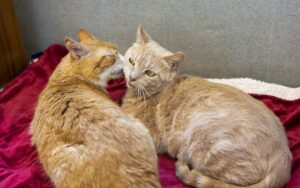 By the time he came to Tabby’s Place, Ponce had been standing alone on the stage for a very long time. Composed entirely of eyes and apprehension, the bony cat was sorely in need of a song and a snack and a tie-dyed T-shirt to keep him warm from the wind.

Ponce had the dubious distinction of being a “double positive,” which is not McDonald’s latest offering, but rather infection with both FIV and FeLV.

This is usually where songs end. This is where shelters euthanize. This is where the stage goes dark, and the rain ceases to be romantic, and there are no more bells left to ring.

Except there’s always one more bell left to ring. 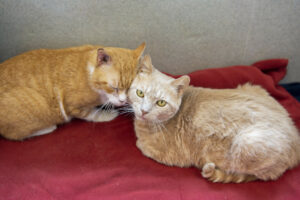 Through the usual, inscrutable folk song of circumstances, Ponce made his way to Tabby’s Place. We walloped him with love, festooned him with a ridiculous name, did cartwheels every time he ate and excreted and explored the possibility of letting us pet him.

In turn, Ponce hummed. He strummed, just simple chords in search of lyrics. He ate with the intensity of a Woodstock alumnus who now listens to vast quantities of Phish and Snoop Dogg and will neither confirm nor deny that he once crossed the country in the back of Willie Nelson’s van. 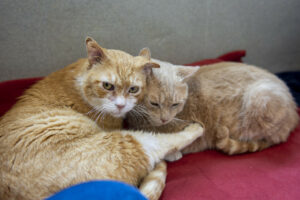 He whispered to his own reflection, “you got this.”

But nobody fully got him, not in the way a song or a soul or a friend is meant to be gotten. And so he pulled at his gingerbread hair until he was tie-dyed with tiny sores, pulled at the sky for a muse that wouldn’t descend, pulled at our heartstrings.

A few VW vans down the line, a meatier music man was stomping his own drumline. He would have preferred to be chomping his own bucket of drumsticks. He was still cross that he had not been invited to assist in the relief effort to clean up 40,000 fallen chicken nuggets.

His chords were discordant, his Santana tee was on backwards, and he couldn’t find a way forwards, no matter how many peculiar bipeds pet him and lauded him and ladled out beefish material into his chalice. Magellan, too, was getting by with FIV and FeLV, but he was getting antsy, and stress is never the source of sweet music.

But bells are always ringing just beyond our earthy earshot. 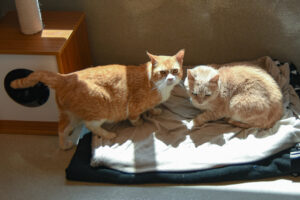 Tabby’s Place was now spinning with a double album of double positives. Each of them could only safely cohabit with exactly one other cat in the building. Woe to us, and them, and Joe Cocker jumping off heaven’s stage, if they should find themselves unable to be friends.

Here’s a secret: any two creatures with enough grace and gumption will always be able to be friends.

“Getting by” gave way to “getting excited” the day we moved Ponce into Magellan’s bachelor pad. Jelly prowled the perimeter. He scrawled secret lyrics and stuck them between the bars of Poncey’s getting-to-know-you crate. (“Dude, no one else has seen this yet. It’s a ballad. It’s called ‘40,000 Nuggets.’ Tell me if it makes you cry. It’s supposed to make you cry.”) He illuminated. 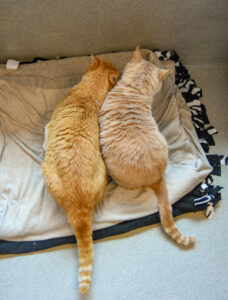 It’s at precisely this moment — the arrival of The Other, a smooth record of mystery and uncertainty — that lesser creatures (humans, mollusks, senators) ring inner alarms. “Can I trust this creature? Must my life be complicated by a new addition? Don’t I have enough to deal with? Am I not perfectly fine unto myself? Danger. Danger. Danger.”

But instead of alarms, Magellan rang bells.

And Ponce stood taller with every one.

Always the sturdier spirit, Magellan had some remedial music to apply to Ponce’s wounds. “Dude,” he shook his squareish head. “You’re the music. You’re the madness. You’re metal. You’re the dinner bell. I don’t mean some tinny thing from TJ Maxx. You’re a heavy vintage piece, maybe even the actual Liberty Bell. But you gotta pick yourself up and ring.”

Soon, the brothers were ringing and singing.

Magellan admired Ponce’s many toes (the better to hold microphones or nuggets with). Ponce admired Magellan’s many pounds. Together, they admired their own survival of two retroviruses, numberless brushes with euthanasia, and the loneliness that can only survive when you know it can end.

Loneliness can always end. It can be outlasted. It can even outlive loss, even such a loss as Poncey’s parting from Jelly, too soon and too terrible to sing about today.

The music will return. Poncey has us, and we have him, and the Great Mercy has us all on its turntable of tenderness.

Yes. Even the big loneliness can end.

But only if you’re willing to end your infatuation with it. To be continued…

1 thought on “With a little help, part I”