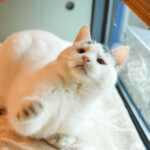 Funny thing about loneliness: like government, the cosmos, or a consumer of chicken nuggets, it tends to enlarge itself.

Funnier thing about loneliness: it can end when we’re ready. 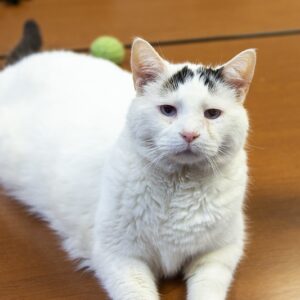 One minute you’re poking a stick in the dust, digging yourself a little walnut-sized hole.

“This is good. I can avoid the inconveniences and inanities and insanities of others in here. They will not find me, annoy me, afflict me with their latest bad poetry or grand ideas or unsolicited opinions of avocados. And they will not judge me, or pet me, or see my gelatinous belly where I hide my secrets and my poetry.”

The next moment, you’re standing at the bottom of the Grand Canyon, a chasm of your own creation, self-styled for a “self-made” cat who’s forgotten that none of us makes ourselves out of thin air, and none of us makes it on our own.

Cats, of course, never forget any of this, much as they may sing a different tune.

If ever a cat called himself Chairman and cackled at the suggestion of needing support, it was one Frankie Rosenberg. The Scourge of the Community Room (“I prefer Sword of the Dispossessed, but I’ll take it — write that, woman”), our wide white scalawag concerned himself with “friends” only insofar as to sing, off-key, “I don’t need me none!” 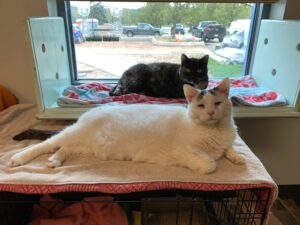 But remember: cats never use double negatives incorrectly (nor double positives, nor opportunities to acquire nuggets). He meant that statement literally.

Between his jam sessions of attempting to jam other cats’ heads into oblivion, Frankie found the holy rhythm, the music of the spheres, the wisdom of the duet.

First, it was Shelley. Fellow staff members frantically photographed the moment Frankie first settled into the picture window beside the grey songbird with a permanent purple haze in her eyes.

Frankie may have been the more booming of the two, but they were both the feline equivalent of Boomers, essentially, and his baritone bolstered her airy alto as the saints and angels blanketed them both in sunshine. To our amazement, Frankie did not yank the edge of the blanket, leaving Shelley bare and blinkered when the music stopped. In fact, the music didn’t stop. 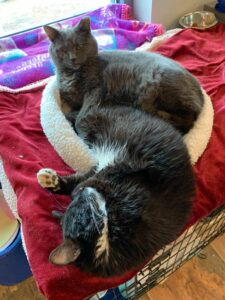 And that wasn’t the end. Just as loneliness begets loneliness, safety begets safety, and the song was passed along to Tux and Consetta and Dani. Soon, Cats Who Hate Cats were collecting like falling blossoms in the windows, paws touching, souls touching, bridges and choruses resolving into something a lot like love.

Secrets were shared. (I can neither confirm nor deny that both Frankie and Shelley consider “Gimme Gimme Gimme A Man After Midnight” the finest song ever written.) Hearts were unburdened. And when everyone returned to their quiet corners, loneliness was transposed into solitude, which is a far healthier thing.

The white-hot temper of the wild white cat was not gone, of course. When he heard his inner cymbals crash, Frankie the Friendly would revert to Frankie the Ferocious. But once you have been befriended, welcomed into the warm window, beheld your own belovedness, even your badness bears the smile of the summer sun.

And when you know that loneliness has a shorter shelf life than cottage cheese, you can hurl yourself into the window with courage. 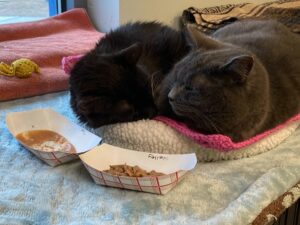 This is true no matter how old or how young we may be, though it gets clearer as our hearts acquire more music.

When I was all of fourteen, I heard the Tracy Chapman song “At This Point In My Life,” specifically the lyric, “at this point in my life, done so many things wrong, don’t know if I can do right,” and I thought, “I feel this in my soul.”

(Let the reader understand that my irreparable wrongs consisted of not practicing piano; claiming I had low blood sugar every single day for several years to get out of P.E.; having hideous bangs that would not lay plumb against my forehead; not laughing hard enough at my Dad’s jokes; and laughing too hard in the back of Honors 9 Math when Jay Stevenson drew me a picture of the substitute teacher, for which I proceeded to apologize to the substitute teacher on behalf of myself and the entire class, and for which I still feel rather guilty.)

I laugh now. But my sense of being irredeemable was real, and it really messed with me, and for a time I stayed far, far, far from the window where the sun-party was singing.

What if all those friendly faces saw the real me, the ratty-haired me, the version of me that was neither as sweet nor as smart nor as sane as I could convince them from across the room? Alarm bells rang any time anyone got too close. 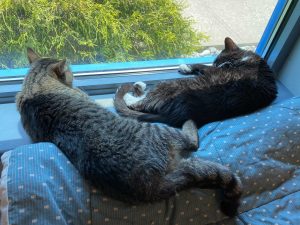 But for me, as for you, as for Frankie, there was a remedy for feeling irredeemable: friends who stay.

In my case, this was the “archers,” my (genuinely very funny) Dad’s name for the pack of semi-feral boys who collected around me and became my best friends through high school. They saw me and heard me in all my slop and strangeness, and they loved me and bickered with me and brought me the gift of themselves every day nevertheless. I was Wendy among the Lost Boys, and to the soundtrack of the brassy bell of friendship, I was found.

And I found that I needed and was needed. 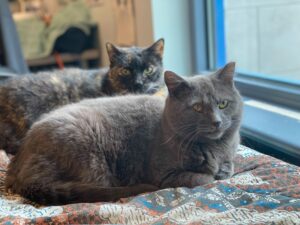 If there’s one message that every cat on earth and in heaven would  tell us today, I think it’s this: you, exactly as you are, not in spite of but because you are the way you are, can and should and shall be loved. The only way you’ll miss the friends you’re meant to have is if you refuse to jump into the window.

And you’ll have many chances. As long as there’s breath in your body, even if your ears go wonky and your mind meanders, you’ll hear the bells under your belly. You’re being beckoned. There are always choices and chances.

Even if you’re all alone in the middle of Montana, there are friends across the earth who will talk to you about cats and cottage cheese and cryptocurrency. You can Zoom over chicken nuggets. You can sing your secrets to each other.

You can find that you’re as friendworthy as Frankie.

You’ll get by, and you’ll get better. Because that’s what being loved does: it makes you larger in all the ways that just might save the world.

But first, on the way, and always, it makes you sing.