Donate
What if nobody knew your birthday?

Tabby's Place > Blog > What if nobody knew your birthday?
By Angela Hartley
No Comments
Uncategorized 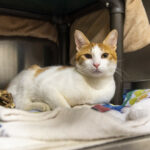 What if nobody knew your birthday?

Would you never celebrate?

Or would you continually celebrate?

Would you cease to exist?

Or would you exist at ten times your actual size? 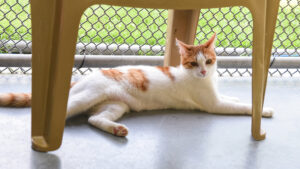 Kozmo is a cat of colossal size. I do not mean his physical person — he jingles right in the middle of the bell curve — but rather the scope of his ecstasy, which is infinite.

Kozmo is a cat of uncommon color. I do not mean his coat — his palette is as pedestrian as mandarins and milk — but rather the technicolor dreamcoat with which he is painted inside. Remember the trippy wallpaper in your grandparents’ bathroom, complete with gold-foil peacocks and flowers known only to wallpaper artistes and the Grateful Dead? Kozmo’s interior decorating is far funkier.

Kozmo is a cat of collective enthusiasm. I do not mean his actual community of cats — on whom more in a moment — but rather the choir inside, decked out in righteous robes with fringes and pockets for Flamin’ Hot Cheetos and shoulder pads so as to increase their size when they sing and shout.

Kozmo’s cosmos is causing the universe to expand at increased speed. 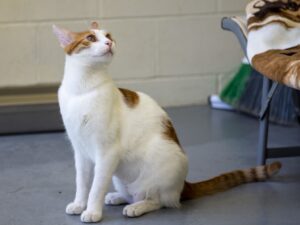 Kozmo’s chaos is causing Suite B to expand its understanding of what it means to be in command.

There was a time, just a few breathless beats ago, when life seemed to command only cruelties over Kozmo. Suffering was his soup; pain came gift-wrapped daily; the planets kept crashing into each other like billiard balls, and even the sun took cover.

Life as a Lebanese street cat is perilous enough, but Kozmo was carrying a chaos all his own: a rectal prolapse. This painful condition, in which rectal tissue protrudes from a cat’s anus, can be fierce and ultimately even fatal. As a cat suffers, he’s likely to lick and languish and long for just one hour of feeling fine.

Kozmo did not feel fine.

There were no birthday cakes or fair shakes.

But a cat of uncommon courage knows how to dance between the earthquakes. 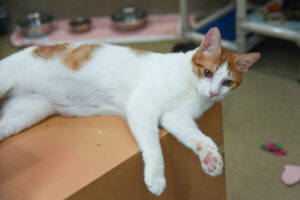 In a world of many heroes, the angels of Animals Lebanon perch atop the pantheon of our hearts at Tabby’s Place. They saw and celebrated Kozmo when he was no more than a collapsed star; we sent for him with sparklers in our hands when we heard about his prolapsed rectum; and the next thing we knew, the commander-in-cosmos was bringing his personal party across the sea.

(I must pause here to accommodate Kozmo’s request that I write: “A Personal Pan Pizza would have helped at this juncture. Pizza parties match my magnificence. Pizza parties have the power to heal political rifts, mend marriages, and motivate fifth grade classes to compete like gladiators for highest math score. Pizza parties tell the truth about life and its deepest meaning. Pizza parties are a metaphor for the soul’s power to overcome. Also, when I run for president, my slogan will be “salad is invalid,” but we will speak of that another time.”)

The pageantry was about to begin.

But there was a certain pre-party project in order, and I don’t mean blowing up the balloons or ordering the 55 pepperoni-crust pizzas (“Tell them that Kozmo is Keto. Tell them, woman.”). Kozmo needed surgery, the scary kind, the kind that bash-fills you with shame, unless you are a cat. 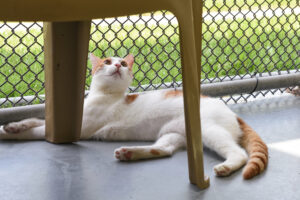 Kozmo is nothing if not Cat. And, in fact, Kozmo is Everything. (“Write that Kozmo is also Everything Bagel, hold the bagel, triple the cream cheese. Tell them Kozmo needs more than a schmear. Tell them, woman.”)

And in place of propriety, Kozmo claimed celebration.

Feeling finer by the day, the cat with the kooky tuckus practiced the art of Party. He panicked when restrained, but only in the interest of dancing. He partied in his water bowl, but only because he saw his own reflection and declared it Good.

And he invited everyone in Suite A — the dorks and the divas and the homecoming kings and the hobos — to his birthday party.

The problem is, people don’t know what to do when you tell them that your birthday party is scheduled for Every Single Day. (Let the reader understand that certain invitees have other obligations, e.g. Thurman‘s standing date with Sting and Merriweather‘s Friday night dinners with United Nations Secretary-General Antonio Gutierrez.) 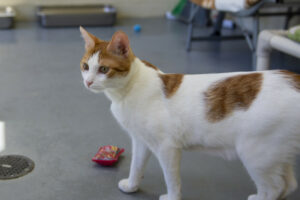 Frankly, Kozmo’s neighbors don’t know what to make of him. As he tears through the room like wildfire, they look like styrofoam planets dangling from strings in a seventh-grade science project, shaking their heads as one crazed sun shakes the skies. (The project still wins a pizza party.)

Some of these mannerless moonbeams don’t even send in an RSVP.

If we let him, he just might free us, too.

Kozmo clearly knows his Greek — he is cosmos, he is chaos, he transcends the chronos of humdrum muddling for the kairos of the miraculous moment — and his favorite word is exstasis. 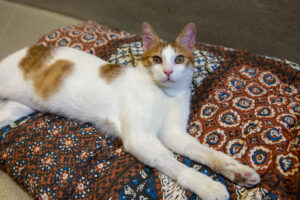 The root for “ecstasy,” exstasis literally means leaving statis — moving out of the stuffy place of stuckness and into ebullient joy.

Kozmo is exstasis in the extreme.

Every time he runs and rejoices and rattles the axis of the universe with his uncorked joy, he is leaving death and despair.

Every time he celebrates and exasperates and motivates everyone around him with his intergalactic energy, he is leaving behind the yoke of fear.

Every time he celebrates his birthday — which is hourly — he invites us to celebrate our own birth, and our being, and the brilliant baffling gift of being together on this very day.

A day in which pizza exists.

A day in which some sweet sage has created gigantic wheels on which cats can run like Supergerbils. 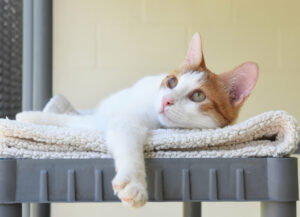 A day in which mandarin-and-milk colored cats can come from Beirut to New Jersey on the sheer force of mercy.

A day in which lunatics and lazybones and lovers of all varieties can gather for the cake of life at the Place called Tabby’s.

Kozmo does not really care if anyone remembers his birthday. He’s too busy reminding us that this day is our birthright.

May our ecstasy ever expand.